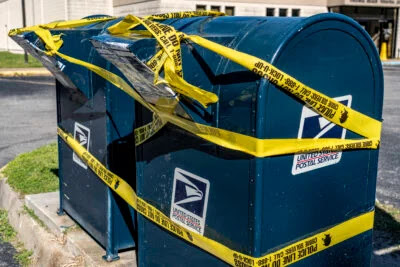 
Democrats and much of the media are screaming bloody murder over President Trump’s latest Postal Service reforms. Trump recently approved an extra $10 billion in federal credit for the floundering mail service. But because he is balking at $25 billion in additional funding, he is guilty of “the weaponization of the U.S. Postal Service for the president’s electoral purposes,” according to the Leadership Conference on Civil Rights. Former President Barack Obama accused Trump of “undermining the Postal Service” to attack voting rights.
The Postal Service is hemorrhaging red ink and Trump’s appointee as Postmaster General, Louis DeJoy, recently curtailed paying overtime for mail delivery. This is slowing some deliveries which some news reports are portraying as an unprecedented outrage. A Washington Post article condemned the Trump administration for seeking “to disrupt a constitutionally mandated government service during the coronavirus pandemic.”
Actually, the Postal Service has been intentionally disrupting its own service since at least the Nixon era. At a high-level meeting in 1969, postal management decided “to no longer strive for overnight mail delivery and to keep this a secret from Congress and the public,” the Washington Post reported in 1974. Management also considered cutting costs by educating Americans not to expect prompt service, according to the Post.
Back in 1764, colonial Postmaster General Benjamin Franklin proclaimed a goal of two-day mail delivery between New York and Philadelphia. In 1989, the Postal Service ratcheted down its goals, labeling as a success two-day delivery from New York City to nextdoor Westchester County, N.Y. Under the new standards, the target for overnight first-class delivery was reduced from a 100-to-150-mile radius to often less than 50 miles. The Postal Service estimated that the changes could add 10% to the average delivery time for first-class mail, which was already 22% slower than it had been in 1969. Postmaster General Anthony Frank claimed that the revised standards would “improve our ability to deliver local mail on time.” But this was simply because the Postal Service lowered the definition of “on time.” The Postal Inspection Service concluded that post offices “generally have a negative attitude toward service improvement, even when the capability is there at no additional cost.”
In 1993, the Postal Service created a task force to examine how it could profit by further reducing standards, shifting far more overnight mail into two-day delivery. That resulted in a trial mail slowdown in Florida with the Orwellian name, “Delivery First.” That moniker didn’t mean delivering the mail would become the highest priority, but that postal carriers’ daily schedule was reversed. Carriers hit the streets first and sorted mail afterwards, adding at least a day to delivery times.
Beginning in 2000, the Postal Service quietly slashed delivery targets in much of the nation for first-class mail going beyond local areas. A 2006 Postal Regulatory Commission report found that the Postal Service scorned federal law requiring the “highest consideration” to speedy mail delivery. Instead, “administrative convenience resulted in mapping coverage of the two-day standard exclusively in terms of surface transportation.” The commission found that “postal patrons in several Western states, including California, experienced far more service downgrades than those in other parts of the country.”
In 2015, the Postal Service effectively eliminated overnight mail delivery even for local mail in much of the nation. With revised standards, “mail was considered on time if it took four to five days to arrive instead of three,” the Washington Post noted. Fifty-one senators and 160 House members ineffectively protested the slowdown. Roanoke, Virginia residents were skewered because local mail processing was shifted to Greensboro, North Carolina, doubling the time necessary for crosstown mail delivery.

Postal management claimed that its 2015 planned mail slowdown would save almost a billion dollars but the agency realized barely 10% of the expected savings. Congress moaned, groaned, and shrugged – and permitted the Postal Service to continue borrowing federal funds to cover its $50+ billion in losses in prior years.

The Postal Service has gotten away with scorning its customers because it is effectively a federal crime to provide better mail service than the government. The Postal Service has a monopoly over letter delivery (with a limited exemption for urgent, courier-delivered letters costing more than $3). The monopoly, which dates back to the 1840s, has become more indefensible with each passing decade. After a half-century of service cutbacks, why continue nationalizing the transport of small envelopes? Ending the postal monopoly could spur the same explosion in options for letter delivery that Uber and Lyft have created for transit.

But the monopoly will not be the decisive issue in the coming debacles. Even if Trump approved $100 billion for the Postal Service, the deluge of mailed ballots in November will be perhaps the greatest election fiasco in American history.

In New York City, officials struggled for six weeks to count mail-in ballots from the June primary. Up to 20% of ballots “were declared invalid before even being opened, based on mistakes with their exterior envelopes,” the Washington Post noted, thanks largely to missing postmarks or signatures. The New York City Board of Elections provided voters with more than 750,000 ballots with prepaid return envelopes, but the Postal Service routinely doesn’t postmark prepaid envelopes, resulting in a huge number of disqualified ballots. The New York Daily News labeled the primary snafus as a “dumpster fire” while a New York Times headline described it as “the November nightmare.”

State election systems will be overwhelmed this year by a ten- or twenty-fold increase in the number of ballots cast by mail. Democratic activists are calling for changes to state laws to permit the counting of ballots that arrive after Election Day and for abolishing standards to assure the integrity of the individual ballot. Such changes are practically guaranteed to produce far more confusion, delays, and distrust for election results.

“The post office has been run poorly for many, many decades,” Trump declared last week. In a less histrionic era, the Postal Service’s failures could spur Congress to finally remove the roadblocks to private innovation in letter delivery. Instead, the coming delivery debacles may become the conspiratorial RussiaGate of the 2020 election.

James Bovard is the author of ten books, including Public Policy Hooligan, Attention Deficit Democracy, The Bush Betrayal, and Lost Rights: The Destruction of American Liberty. He has written for the New York Times, Wall Street Journal, Playboy, Washington Post, New Republic, Reader’s Digest, and many other publications. He is a member of the USA Today Board of Contributors, a frequent contributor to The Hill, and a contributing editor for American Conservative.
The above originally appeared at aier.org.
READ ALSO  Canada border agent says he received unusual FBI phone call in Huawei CFO U.S. extradition case