Magellan Midstream: Solid Performance And Potential Despite The Demand Destruction For This 11% Yielder (NYSE:MMP)

Home Financial news Magellan Midstream: Solid Performance And Potential Despite The Demand Destruction For This 11% Yielder (NYSE:MMP)
2020-11-032020-11-03By finanz.dk

On Friday, October 30, 2020, refined products midstream titan Magellan Midstream Partners, L.P. (MMP) announced its third quarter 2020 earnings results. Magellan Midstream has been somewhat more impacted by the pandemic than some other midstream companies, which is largely due to the demand for refined products declining as travel restrictions and general fear of the novel coronavirus are encouraging a growing number of people to stay at home.

Magellan Midstream still managed to beat the expectations of its analysts in terms of both earnings and revenues though, so the company’s performance was clearly not as bad as some feared. The company’s unit price certainly responded positively and rose in the trading session that accompanied the news. This earnings report thus appears to warrant further analysis as we attempt to determine what action to take with regards to Magellan Midstream Partners.

As my long-time readers are no doubt well aware, it is my usual practice to share the highlights from a company’s earnings report before delving into an analysis of its results. This is because these highlights provide a background for the remainder of the article as well as serve as a framework for the resultant analysis. Therefore, here are the highlights from Magellan Midstream Partners’ third quarter 2020 earnings report:

One thing that we notice here is that Magellan Midstream Partners generally saw its financial performance decline compared to the prior-year quarter. This was mostly due to the impact that the COVID-19 pandemic had on the demand for refined products. Magellan Midstream Partners owns and operates the largest network of refined products pipelines in the United States, containing 9,800 miles of pipelines, 54 terminals, and 46 million barrels of storage: 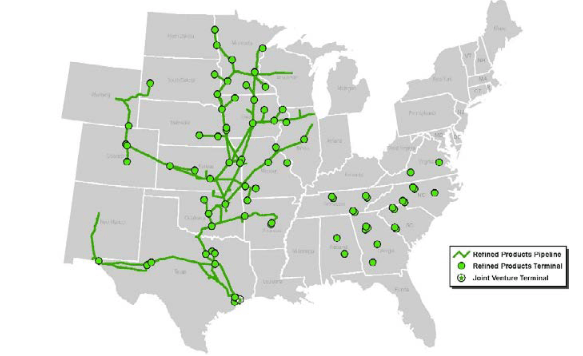 The company’s pipeline system covers most of the central United States and connects to nearly 50% of all of the refining capacity in the United States. This system would ordinarily be a source of strength for the company but unfortunately the COVID-19 outbreak has changed this. As everyone reading this is no doubt aware, the pandemic caused governments across the United States and internationally to shut down their economies and curtail unnecessary travel.

This reduced the demand for refined products, which reduced the quantity of resources flowing through Magellan’s refined products pipelines. This was noted in the highlights above. As Magellan Midstream’s basic business model is charging a fee for each unit of product moving through its pipelines, the lower volumes had a negative impact on revenues. In the third quarter of 2020, Magellan Midstream’s refined products pipeline system generated $320.809 million in total revenue compared to $352.611 million in the prior-year quarter. 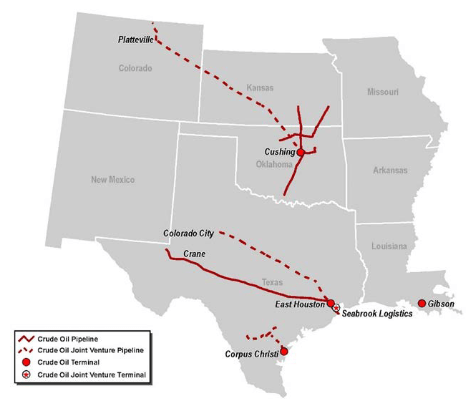 As we can see, this pipeline system covers primarily the Permian and the DJ basins. This is certainly a reasonable footprint for a crude oil pipeline network to operate in considering that the Permian basin in particular has been the source of the largest proportion of production growth in the United States over the past decade or so. As some readers may point out though, the Permian basin has been adversely affected by the pandemic-driven decline in energy prices. This price decline caused upstream producers operating in the basin to reduce their capital expenditures and reduce production in an effort to preserve their money until macroeconomic conditions improve.

This can be expected to reduce the volume of crude oil flowing through the company’s pipelines, which would have an adverse impact on Magellan’s revenues because the business model here is very similar to that of the refined products pipelines. Fortunately, Magellan Midstream has a way to insulate itself in this case. The company provides pipeline transportation services for its customers under long-term contracts that contain minimum volume commitments, which specify a minimum amount of crude oil that the customer has to send down Magellan’s pipelines or pay for anyway.

These commitments therefore provide Magellan Midstream with a certain amount of protection against a decline in energy production. This protection is certainly not absolute though. In the third quarter, Magellan’s crude oil pipelines transported a total of 45.1 million barrels of oil compared to 79.2 million barrels in the year-ago quarter. This only very slightly reduced the system’s revenue though, taking it to $154.652 million from $155.377 million a year ago. The reason why revenues only declined so slightly compared to volumes is because the price that the company charged per barrel increased as well as the company’s customers storing more crude oil than usual in its facilities (storage facilities charge based on the amount of resources being stored).

As I discussed in a previous article on Magellan Midstream, the company managed to increase the tariff rate on its refined products pipelines back in July. The company was able to secure a 3.5% tariff rate increase on July 1, 2020. The tariff is the price that the company charges to move a unit of resources through its network. Thus, the tariff increase here is rather nice because the higher price managed to offset some of the impact from the lower volume of products moving through the company’s pipeline system.

This is exactly what I predicted would happen in my previous article. We can see the impact of these higher prices on Magellan Midstream’s quarterly results. In the third quarter of 2020, the company’s refined products pipelines had $1.719 in revenue for every barrel shipped compared to $1.618 in the prior-year quarter. Thus, the increase in revenues per barrel shipped helped ensure that Magellan Midstream’s revenues and cash flows did not fall as much as they could have.

The decline in transported volumes was the largest contributing factor to the year-over-year weakness but it was not the only one. Back in the first quarter of this year, Magellan Midstream sold three of its marine terminals. These terminals allow ships to dock and load or offload products and so support the burgeoning North American export industry. It should be fairly obvious why the sale of these terminals would have a negative impact on Magellan’s revenues.

In the prior-year quarter, Magellan Midstream did own these terminals and so was entitled to the revenues from them. However, the company did not have these terminals this year so clearly could not receive the money generated from them. Naturally, this would have a negative impact on the company’s revenues. This decline was partially offset by the East Houston-to-Hearne pipeline that we have discussed in some past articles on the company.

This project started operation late last year so was naturally unable to contribute to the company’s performance last year but was certainly able to do so this year. In addition, an expansion to this system became operational during this quarter so was partially able to offset the revenue weakness. Unfortunately though, we are unlikely to see more growth going forward as Magellan Midstream has now largely completed its growth projects so will be relying on higher volumes to drive its forward growth.

As has been the case with pretty much everything in the traditional energy industry, Magellan Midstream has seen its unit price pummeled by the market. As we can see here, the company’s common units have fallen a fairly dramatic 43.77% year-to-date: 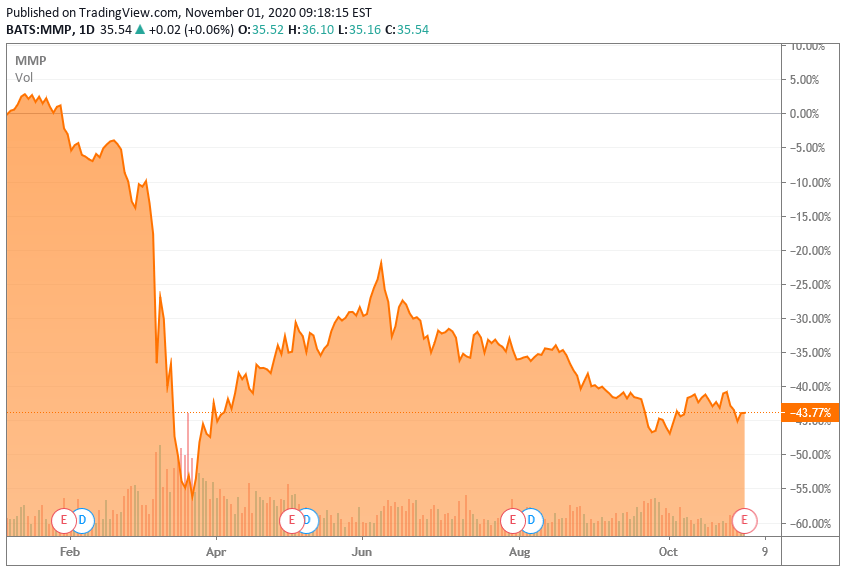 This decline in the company’s common unit price was likely caused by the decline in crude oil prices that accompanied the outbreak of the COVID-19 pandemic. However, we can clearly see that the company’s revenues and cash flow did not decline nearly as much as the unit price did. Thus, the market may have overreacted here. One thing to keep in mind is that midstream companies such as Magellan are largely insulated from commodity price fluctuations. This is due to the business model that these companies use. As already mentioned, a midstream company such as Magellan Midstream generates revenues by charging a fee for each unit of resources that flows through its pipelines. Magellan Midstream generates about 85% of its operating margins from these fees: 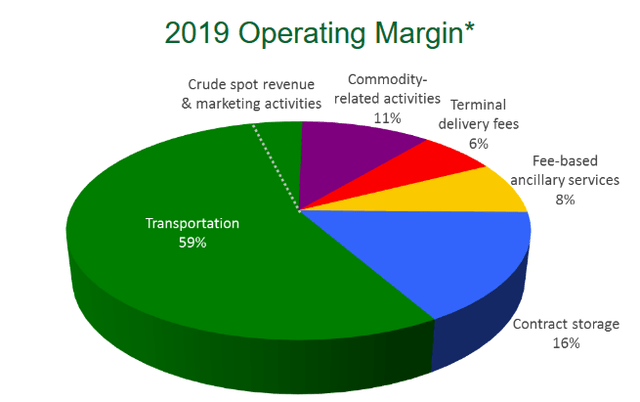 It is important to keep in mind that these fees are based solely on the volume of resources transported and not on the value of those resources. In this regard, these companies act much like toll roads. As a result of this model, a company like Magellan Midstream is not affected too much when crude oil prices decline. They can be indirectly affected though, as we saw with Magellan Midstream having lower refined products volumes. This is more a function of the demand for these products though and not exactly because of the lower energy prices. Fortunately, there is some reason to believe that the worst is behind the company with regards to refined products demand barring another round of economic lockdowns.

In the most recent quarter, Magellan Midstream Partners reported a distributable cash flow of $258.766 million. In the same period, the company had 225.222 million weighted average common units outstanding. Thus, the $1.0275 quarterly distribution costs the company $231.42 million per quarter for a distribution coverage ratio of 1.12. This is a much tighter coverage than I usually feel comfortable with and it is lower than the 1.20 that analysts normally consider to be sustainable. Thus, there may be some risk of a distribution cut here, although Magellan’s management does appear committed to it. This is something that you may want to keep in mind when considering an investment in this company.

In conclusion, Magellan Midstream has been somewhat more impacted by the pandemic than some of its peers due to the demand destruction in the refined products space. With that said though, it is still holding up admirably and generating copious amounts of cash flow. Although the growth prospects are no longer what they once were, the company still has some as the demand for refined products slowly recovers. This could be a multi-year story, however. The distribution coverage though is far tighter than I would normally like and while Magellan’s management appears to be committed to it, there is a risk of a cut here. Overall though, the company may still be deserving of further research.