Macy’s (M) belongs to the top 5 companies with the highest short interest, approximately 46%. There is a possibility of a short squeeze. But for that, we need a bullish catalyst, and that could be strong earnings. The company tries to maximize profit through the digital section, and that is crucial for us. The estimated earnings for FQ2 2021 lie at -1.80 and revenue at $ 3.51B. We believe the company could purely beat these estimates because of our spending data analysis.

The company is more than 60% down YTD. Currently, Macy’s stocks are trading in the range of 6.0. – 6.50 USD per share. According to our analysis, the current sell-off is unreasonable. The stock is down due to the lockdown measures and wrong consumer spending expectations. However, both these factors are no longer applicable. The next point is huge liabilities, which will significantly impact the company’s profitability for the next 2-5 years.

If we take into account the fact that Macy’s big competitors such as Walmart (WMT) or Amazon (AMZN) gained from this crisis and the market share for Macy’s keeps declining, and despite lockdown measures and the debt issuing, the fair value of Macy’s stock should be between 10 – 12 USD. Here is why.

Firstly, let’s start with general spending data. In the US, the total spending (in August) by all consumers decreased by 8% compared to January. The Apparel & General Merchandise sector is also down by 10.7% compared to January 2020. That is an excellent recovery in the section, where Macy’s operates. The Fiscal and monetary stimulus plays a significant role here, but the overall economic situation is way better than it was compared to March or April. 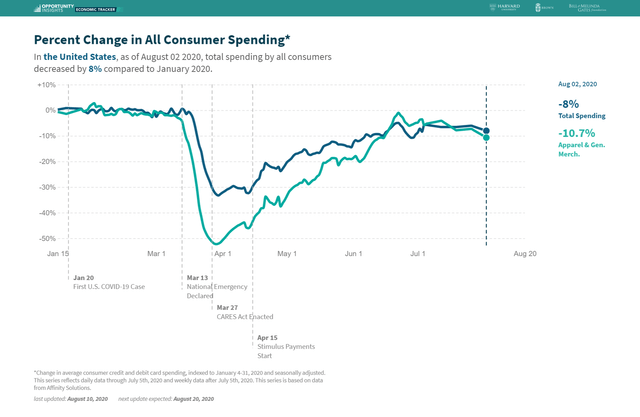 The Q1 includes three months – February, March, and April. During these months, Apparel and General Merchandise spending in the US looked like this: 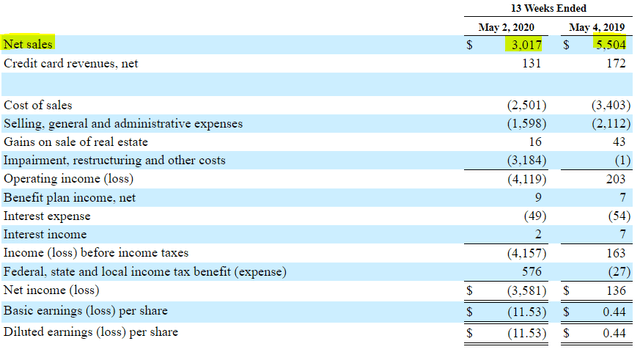 Comparatively, Q1 2020 vs Q1 2019 earnings report represents a 45% decline in sales. According to the spending analysis, the 13 weeks average (from February to April) reflects a 21% decrease in Apparel and the GM sector. However, Macy’s sales declined by approximately 45%. These declining numbers are to competitors’ (such as Walmart and Amazon) advantage, as they reflect a lower market share and a lower performance against the benchmark (Apparel and General Merchandise spending tracker).

The weekly checks between May to July indicate that the 3M average in the apparel sector decreased between -12.7% and -13.9% respectively. This is a robust bullish argument, and I expect that Macy’s will reach a better number of sales than 3.5B USD expected.

As there is approximately 40-50% improvement between February-to-April and May-to-July Apparel and General Merchandise consumer spending, I am convinced that 3.5B estimate in consumer spending is extremely conservative.

All metrics in the scenarios above are compared with the Quarterly report in 2019. The sales for the first quarter (period ending in April 2020), were $3017 million. The consumer spending in the Apparel and General Merchandise sector for that period (3M average) was -21.6% with the decline in Macy’s net sales standing at 46%. Currently, during the period of May-to-July, the 3M average is -13.9% (compared to January), and the Estimated scenario is almost -37%. The Apparel and GM sector is showing a significant improvement. Therefore, I would anticipate better than expected earnings, averaging somewhere between Moderate and Positive scenario.

Card spending data correlates with consumer spending. The difference is that these data, from late July and early August, are more focused on the individual sectors. When checking the data for the department stores from late July, one should see around a 20% decline in average spending data compared to last year. General Merchandise is rising, and clothing sales have slightly decreased. Adding these together should give us an estimate in sales between a Moderate and Positive scenario.

Here is an important point. If the earnings estimates were close to what the analysts estimate, or the worst-case scenario, it would be bad for Macy’s, because general spending is rising. The company would not achieve this run and would probably lose its customers. Nevertheless, this is always a possibility, but I’m convinced that it is less likely to happen right now.

The weighted average is more important

Having some numbers to confirm our theory is ok, but it is not enough. We need to achieve more certainty, examine more carefully and calculate the weighted average. There are 555 Macy’s stores in the US. When looking at the top 5 locations, we add the Apparel and General Merchandise spending in these stores during the May-to-July. Next, we add a weighted average to these locations. For example, California will have the biggest weighted average, because most stores operate there; followed by Florida etc.

The top 5 locations add up to 241 stores in the US, which is 43% of total stores. For each state in the Top 5, we take individual weighting and multiply it with 14 weeks average consumer spending in the A&GM sector. When we add the total (all other stores excluding the TOP 5), where the average stands at -12.7% decrease, our Weighted average should be -16.3%.

The weighted average for the first quarter should be between 21% – 25%. It indicates that the value of -16.3% is conservative, and we can assume that the data is such because the whole section was included within the calculation (including the states with the worst consumer spending already, which was – California, Texas etc.). The calculation took into account the TOP 5 with the highest weighting.

The company announced Polaris strategy, which means a three year plan to compete with other more prominent companies and to stabilize sustainable, profitable growth. This strategy includes:

According to the card spending data, we expect quite strong growth in the digital section during FQ2.

According to this analysis, I expect the company will beat the sales estimates ($ 3.5B) easily. The moderate and positive scenario is a more relevant target. Nonetheless, there are two possibilities, which could cause a short squeeze – the enormous short interest, so that the possible price gain could reduce many stop losses, and the robust consumer spending data in the A&GM sector, which could result in beating estimates. Currently, the momentum is not good, but the bulls need some trigger to rotate the mid-term downtrend. These earnings could do it, and that is the reason I am bullish right now.

There is also a possibility that the company will not fulfill my estimates. If that happens, it will mean that the company has a considerable problem to reach new customers or to retain its current customers. Should this scenario occur, it would be best to close the position on this stock. That option is real but less likely.

Disclosure: I/we have no positions in any stocks mentioned, but may initiate a long position in M over the next 72 hours. I wrote this article myself, and it expresses my own opinions. I am not receiving compensation for it (other than from Seeking Alpha). I have no business relationship with any company whose stock is mentioned in this article.