LVMH said it was preparing to file a lawsuit against US jeweller Tiffany alleging that it has mismanaged the business during the Covid-19 crisis so significantly that it gave the world’s largest luxury group no choice but to reconsider its $16.6bn takeover bid.

The move comes a day after Tiffany launched its own lawsuit against LVMH, which on Wednesday tried to pull out of the deal following an intervention by the French government. It marks an escalation in the deepening legal battle over what would have been the luxury sector’s biggest-ever deal, sealed at a price of $135 per share in November last year before the coronavirus pandemic upturned the industry.

LVMH said on Wednesday that it could not complete the acquisition as planned after the French government urged it to delay past a key deadline in the merger contract so as to help the country in a trade spat with the US.

In a letter, the French foreign ministry requested LVMH “take part” in defending the country’s interests to counter tariffs Washington has threatened to impose on French goods from January 6 in response to a proposed new tax on digital companies.

Tiffany’s lawsuit, which was filed on Wednesday in the US state of Delaware, seeks to force LVMH to honour the original merger agreement and finalise the deal. It accused LVMH of using “any available means” to avoid closing the transaction, and dismissed the French government’s letter as a mere pretext.

In a statement, LVMH dismissed such charges saying Tiffany’s case was “totally unfounded” and signalled it would try to prove that Tiffany had suffered a “material adverse effect” — pandemic damage so bad LVMH could legitimately alter its bid. Enforcing so-called MAC clauses has proven difficult for companies in takeover situations in the past, according to lawyers.

LVMH said in the statement: “Tiffany did not follow an ordinary course of business, notably in distributing substantial dividends when the company was loss making and that the operation and organisation of this company are not substantially intact.”

It added: “LVMH therefore confirms that the necessary conditions for the conclusion of the acquisition of Tiffany are not fulfilled.” 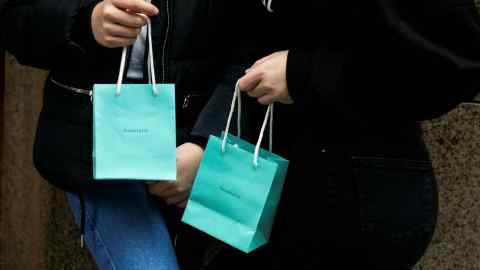 The unprecedented intervention by the French government in the deal has provoked questions as to whether LVMH had somehow solicited assistance to delay the transaction closing. Its billionaire chairman and controlling shareholder Bernard Arnault has been manoeuvring behind the scenes for months to try to put pressure on Tiffany to renegotiate the deal for a lower price.

A Bloomberg report on Wednesday said that Mr Arnault “asked for help” from the French government and “initiated the move” that led LVMH to say it would pull out of the takeover. The company said it “formally denied” what it called “malicious and unfounded allegations”.

Asked on a call on Wednesday with reporters whether LVMH had solicited help from the French government, Jean-Jacques Guiony, the group’s chief financial officer, dismissed the suggestion as absurd. “You must be joking. Are you seriously suggesting that we procured the letter? I don’t even want to answer that question.”

Mr Guiony later said the letter from the French foreign ministry was “purely and fully unsolicited”. LVMH executives met with the foreign minister Jean-Yves Le Drian after receiving it, but the letter “came as a total surprise,” the CFO said.