Very few retailers have seen their shares behave as positively in the past few months as what you can see below. Lifestyle retailer Lululemon Athletica (LULU) is actually up huge this year, appearing to ignore the malaise caused by COVID-19 economic weakness. Indeed, the stock is up about one-third in 2020, and 140% from the bottom set back in March. The scale with which this thing has rallied is hard to fathom but that is reality.

Lululemon is a leader in its class and has proven it is the best of the best when it comes to athleisure apparel creation and distribution. I don’t deny that as I believe it is a fact at this point, based upon years of Lululemon posting astounding growth numbers. The problem for me is that at some point, expectations are too high and the resulting valuation is commensurately high. I think expectations have reached the point where Lululemon will have trouble living up to them and that means the downstream impact should be a lower valuation. In short, Lululemon is too expensive.

Investors love Lululemon because it has grown by leaps and bounds over time, as we can see below.

Athleisure apparel has been a burgeoning category in recent years, due in no small part to Lululemon’s ability to make this sort of clothing cool, socially acceptable, and even desirable. Lululemon, therefore, is at the leading edge of this category it helped create.

We can see that revenue is expected to take a very small dip this year, which would represent a tremendously strong result if you’ve been paying attention to retail sales in the past few months. There are few retailers outside of grocery stores that have seen their sales flat with last year. However, when looking at discretionary retailers, higher 2020 sales numbers are as rare as unicorns.

Lululemon, however, is expected to see essentially flat sales this year, which would be a sign of immeasurable strength against other discretionary retailers that are just trying to survive.

This wouldn’t be the first time Lululemon outperformed its peers, however, as we can see below with comparable sales numbers for the past several years. 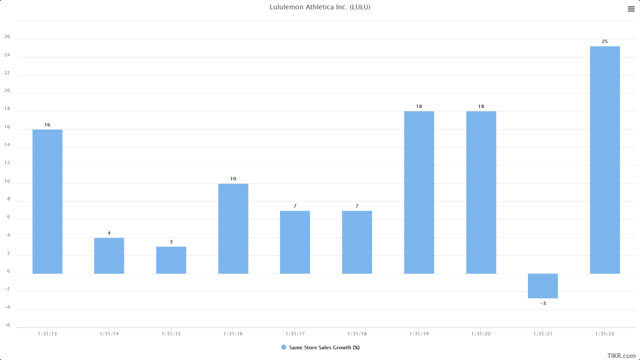 This company has seen volatile results in comparable sales, with two consecutive years of 18% gains, and others with gains in the low-single-digit area. However, the trend is always higher – except for this year – and investors continue to expect great things from Lululemon.

Comparable sales, quite incredibly, are expected to decline just 3% this year, followed by a 25% gain next year. If we let that sink in a bit, analysts currently expect Lululemon’s comparable sales, indexed to end of fiscal 2020 numbers, to be 21% higher than they were last year for next year. As I mentioned, almost the entire world of retailers would love to see next year’s revenue flat to last year, but analysts are expecting a blockbuster increase in comparable sales heading into calendar 2021.

This is where I struggle with just how much growth Lululemon is expected to produce; what happens if comparable sales “only” rise 18% or 20% next year? That would be an undeniable success by just about any standard, except for the one Lululemon is being judged by today.

Indeed, this table tells us all we need to know about the company’s margin profile. Gross margins have moved around a lot in recent years, cresting at 56.9% of revenue all the way back in fiscal 2012, and hitting their nadir at 48.4% in fiscal 2016. That’s a huge range for gross margins and introduces a wildcard when trying to assess the company’s ability to boost profits over time.

However, the important thing to note is that gross margins are very near the top today, with the past two years coming in at 55.2% and 55.9%, respectively. That implies that further margin gains will be tough to come by given that the company has many years of data to suggest it cannot do appreciably better than that.

Catalysts for higher gross margins include better selling prices, leveraging down of supply chain costs, lower merchandise cost, and others. However, Lululemon is already extremely efficient, as ~55% gross margins are strong for an apparel retailer. Thus, I simply don’t see a meaningful upside from here.

In addition, quite worryingly, SG&A costs have done nothing but rise over time. SG&A was 28.2% in fiscal 2012 and 2013, but last year, was 33.5%. That’s a huge increase in support costs and that money comes directly out of operating income. Indeed, operating margins crested at 28.7% of revenue in fiscal 2012, but were just 22.4% last year, reflecting slightly weaker gross margins, but mostly, it was due to ever-rising SG&A costs.

With gross margins near their top, and years of demonstrated weakness in SG&A costs, I’m struggling to see a positive margin catalyst here. The company has been growing revenue by leaps and bounds for many years, but that hasn’t stopped the relentless increase of SG&A costs. Indeed, given how much Lululemon has moved its top line higher, it is really difficult to believe that it was able to see SG&A costs rise by so much. But that’s the reality, and it isn’t a good one.

The valuation isn’t your friend, either

I’ve tried to make the point that Lululemon has limited catalysts for increasing growth rates in the coming years, but that is exactly the opposite of what the valuation is telling us. Indeed, EPS estimates are for $6.27 next year, which should reflect a normalized operating environment.

Shares trade for a staggering 50 times that number today, and it isn’t like that is some trough value that is artificially inflating the PE ratio; that would represent a record year of earnings and by a very wide margin. The stock is just that expensive.

Further, it isn’t like earnings estimates are rising and the stock is just trying to keep up.

We can see that EPS estimates for this year and the out years have been flat-to-down in the past 18 months or so. Lululemon’s sky-high expectations make it such that the only reasonable possibility of surprise on revenue and earnings is downward, not up.

Given all of this, Lululemon is a rare example of a truly great business that is just far too expensive. I cannot justify 50 times earnings for just about any stock, and Lululemon is no exception. Expectations are incredibly high and when that happens, I take notice. This company has to be in a class of its own just to satiate investors’ expectations for growth, so what happens if it isn’t? I think we’ll see a much lower PE ratio, and therefore, a lower share price.

I hate passing up on such an outstanding company, but the valuation has left me no choice; Lululemon is a sell.