Election officials said on Monday that Mr Lukashenko, 65, had won more than 80 per cent of the vote in Sunday’s polls, and that Ms Tikhanovskaya, whose rallies have drawn huge crowds in towns around the country in recent weeks, had taken just 10 per cent.

Claims of a landslide win for Mr Lukashenko triggered huge protests and a brutal crackdown from police on Sunday night, and tensions erupted again on Monday as thousands of Belarusians took to the streets once more.

Police sealed off large areas of the centre of the capital Minsk and used batons, stun grenades and rubber bullets to disperse protesters.

Nasha Niva, a Belarusian website, said that one of its journalists had been hit in the foot by a rubber bullet after police opened fire on a group of reporters.

The Belarus interior ministry said one protester in Minsk had died when an incendiary device he was allegedly attempting to throw at police exploded in his hand.

Local media also reported clashes in cities such as Grodno and Brest, and other smaller towns.

During protests on Sunday night, Belarusian security forces also arrested about 3,000 protesters in a bloody crackdown that activists said had left dozens of people in hospital and at least one person dead. Belarusian authorities denied anyone had been killed on Sunday.

The protests are the most serious that Mr Lukashenko, dubbed “Europe’s last dictator” for his ruthless suppression of dissent, has faced during his 26 years in charge of the former Soviet state, which is wedged between Russia and the EU.

As the crackdown continued on Monday night, questions arose at one point about the whereabouts of Ms Tikhanovskaya, a 37-year-old former teacher and political novice, who ran for office after her blogger husband was jailed by Mr Lukashenko’s regime and barred from running himself. 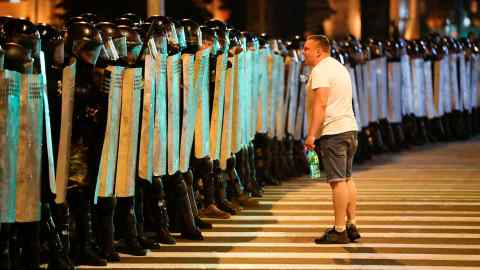 Ms Tikhanovskaya’s campaigners said they had lost contact with her after she spent three hours at Belarus’s election commission on Monday afternoon when she went to file a complaint.

The campaigners said that Ms Tikhanovskaya then left the building, told a campaign lawyer she had “made a decision”, and went off without telling him where she was going.

However, her campaign team subsequently said she had been back in touch and was “fine”.

In recent days, Mr Lukashenko has dramatically ratcheted up the pressure on Ms Tikhanovskaya and her supporters. Her campaign manager and six other staff were detained on Saturday on the eve of the election, and another of her key allies, Veronika Tsepkalo, fled the country on Sunday fearing for her safety.

As the scale and brutality of the crackdown became apparent on Monday, Mr Lukashenko’s government came under fire from western politicians.

Mike Pompeo, US secretary of state, said the US was “deeply concerned” about the conduct of the election, and condemned the use of violence against protesters.

Meanwhile, in Belarus, bloggers on the influential Nexta Telegram channel urged people to take to the streets on Monday night, and also called for a general strike on Tuesday.