Los Angeles is a City on the Brink 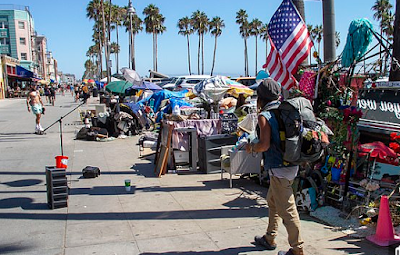 The Detroitization of American cities run be lefty nutjobs is accelerating.

The productive tax base is leaving, just like it is in New York City, Chicago and Los Angeles.

At some point, these cities could hit a tipping point where dirt and despair are the only things left and new cities, perhaps Miami, Dallas and Houston will emerge a the new great American cities.

Junkies and the homeless, many of whom are clearly mentally ill, walk the palm-lined streets like zombies – all just three blocks from multi-million-dollar homes overlooking the Pacific.

TV bulletins are filled with horror stories from across the city; of women being attacked during their morning jog or residents returning home to find strangers defecating in their front gardens.

Today, Los Angeles is a city on the brink. ‘For Sale’ signs are seemingly dotted on every suburban street as the middle classes, particularly those with families, flee for the safer suburbs, with many choosing to leave LA altogether. 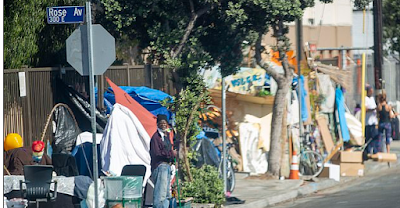 British-born Danny O’Brien runs Watford Moving & Storage. ‘There is a mass exodus from Hollywood,’ he says.

‘And a lot of it is to do with politics.’ His business is booming. ‘August has already set records and we are only halfway through the month,’ he tells me.

‘People are getting out in droves. Last week I moved a prominent person in the music industry from a $6.5 million [£5 million] mansion above Sunset Boulevard to Nashville.’…

Lou Ferrigno became friends with Schwarzenegger when both worked out at Gold’s. While he might not be quite a household name like Arnie, Ferrigno starred in the TV series The Incredible Hulk and became one of the wealthiest bodybuilders in the world, with a fortune of $12 million.

President Donald Trump appointed him to his council on fitness, sports and nutrition in 2018.

Ferrigno, for all his impeccable connections, has become fed up with what he describes as the ‘dramatic decline’ in LA. He and wife Carla recently sold their £3 million home in Santa Monica and moved into a 7,146 sq ft mansion two hours north of LA…

Stretches of Hollywood Boulevard – embedded with glittering stars representing those who achieved their dream of fame and fortune – resemble a Third World shanty town rather than the heart of America’s second-largest city.

Outside the Chinese Theatre where Marilyn Monroe and other screen icons are immortalised by their handprints in concrete, the Michael Jackson and Superman lookalikes who usually pose with tourists have been replaced by vagrants begging for change.

Meanwhile, the visitors snap photos of a large Black Lives Matter logo painted down the middle of the street.