Long-Term Industry Trends Are Keeping Me Out Of Fox Corp. (NASDAQ:FOXA)

On March 19th, 2019, the deal between 21st Century Fox and The Walt Disney Company (DIS) was official. With the sale of most of its assets, 21st Century Fox thus became Fox Corporation (NASDAQ:FOXA). The new, leaner company was only to consist of strongly branded domestic media assets such as Fox News, Fox Business, FS1, FS2, Big Ten Network, 29 full power broadcast stations, and Fox Network with 208 local market affiliates. As can be seen by the assets Fox decided to keep, the focus is on producing/delivering compelling news, sport, and entertainment content through iconic brands. Although Fox has good brands, it is not a content creator, and the long-term industry trend in MVPDs is keeping me away from this business. 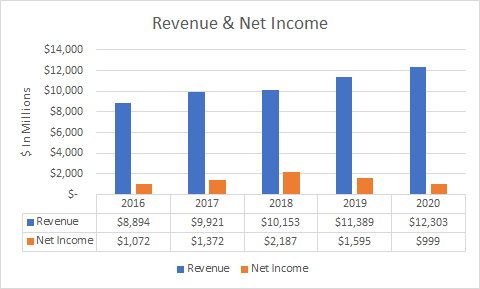 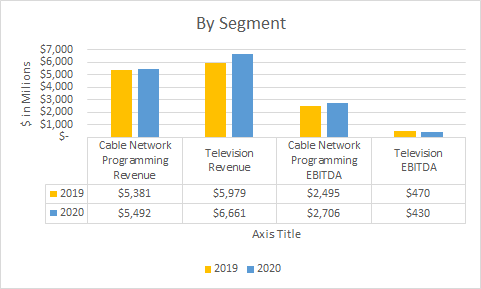 With fiscal 2020 in the books, investors now have a year of results to look at for the new standalone company. To note, the above graph has five years of data that was supplied by the company but may not be accurate in regards to comparison. What can be seen above is that revenue growth has been strong for the Fox Corporation assets with a CAGR of 6.7%. In particular, for 2020, revenues grew 8% from 2019. This increase was due to total affiliate fee revenue increasing 7%, advertising revenue increasing 5%, and other revenue increasing 29%. Fox breaks down the company is into three segments, cable network programming, television, and other/corporate. In 2020, television made up 54% of revenue and cable network programming 45%. Looking at the segment breakdown above, one can see that cable network programming revenues grew 2%, and television grew 11% YOY. Cable network programming was up due to a 2% increase in affiliate fees and a 17% increase in other from higher sports sub-licensing and Premier Boxing Champions pay per views. Grow in these two areas was offset by a 2% decrease in advertising revenue due to fewer sport showings. For television, the growth in revenue is attributable to an 8% increase in advertising due to Super Bowl LIV and the airing of 2 MLB World Series Games, a 19% increasing in affiliate fee revenue, and a 14% increasing in other from the acquisition of Bento Box.

While revenue has seen solid growth, net income has struggled over the past two years. As can be seen in the segment breakdown above, cable network programming EBITDA grew 8.46%, while television EBITDA was down 8.5%. So, why is net income down if combined segment EBITDA increased 5.77%? The reasons are many, but it starts with operating costs increasing 7% due to higher sports rights amortization, TV costs from broadcasting Super Bowl LIV, broadcasting from being standalone company compared to a partial year in 2019, and the impact of adding Bento Box and Credible. On top of this, SG&A cost increased 23% mostly from operating as a standalone company for the full year with some impact from acquisitions of Bento Box and Credible. Also reducing net income YOY was an increase in interest expense of 82% due to $8 Billion note issuance and $451 Million in impairment/restructuring charges. Overall, net income declined 37% from prior year, and Fox reported a GAAP EPS of $1.62 and adjusted EPS of $2.48.

Fox, as of the most recent quarter, has a current ratio of 3.93x. This high liquidity means that Fox won’t have any problems paying off liabilities in the short term. Along with that, the debt to equity is good at 1.15x. With the $8 Billion note issuance, it’s nice to see it hasn’t affected the leverage of the company. Fox has good financial standing with nothing of much concern.

COVID-19 has been a tailwind for some companies but a headwind for most. It is looking like it will be a headwind for the next few quarters for Fox. With the cancellation or postponement of many sports, Fox has already seen some downside in advertising revenues. While some sports have come back such as the MLB, NASCAR, and UFC, that should benefit Fox, the Big Ten announced it canceled fall football, which will be a drag on the cable network programming segment. While the 2021 Super Bowl is being broadcast by CBS, Fox still has Thursday Night Football. Therefore, the successful (or unsuccessful) return of the NFL will also have a large impact. Overall, less sports will have a negative effect on the company advertising revenue; it will be offset somewhat by election advertising. The next two quarters will be interesting to see what happens. 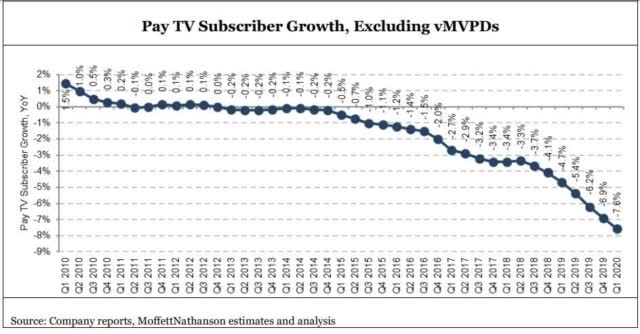 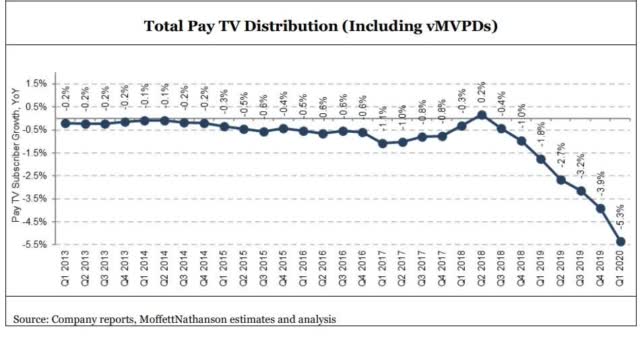 While the pandemic offers downside in the near term, the long-term risk is a trend toward cord cutting. As can be seen above, multichannel video programming distributor (MVPD) subscriptions have been trending down every quarter since 2013. What this means is fewer people are getting traditional television services such as cable or satellite. Even including virtual MVPDs to the mix, the more recent trend is strongly downward. People generally are looking to move to the plethora of streaming services where they can mix and match content they want to watch. Over the long term, this will eat away at affiliate fees and is a huge risk to any company that derives revenue this way. Fox is not a content creator, and any investor should be worried about the way revenue is made in the media landscape ten years from now.

As of writing, Fox is trading at around $25 a share. Using the 2020 EPS stated above, the company is trading at 15.43x and at 10.08x using the adjusted EPS. With a book value per share of $16.72 and net tangible assets per share of $25.34, the company is trading at 1.50x and 0.99x, respectively. I am not buying at these valuations for two reasons. The first reason is the long-term trend as laid out above of MVPDs, and the second is that the higher costs reported in 2020 are likely to stay for this standalone company. I would want a margin of safety to buy into Fox and would consider if the price dropped to around $17.

Fox Corporation is the standalone company that came out of the 21st Century Fox-Disney acquisition. This new company with strong television brands had its first full standalone year in 2020. Looking at the financials, it seems as if costs are going to be higher as a standalone. The pandemic has removed sporting events from being broadcast by Fox, which reduced advertising revenue which may persist in fiscal year 2021. On top of this short-term negative, the general industry trend for multichannel subscribers has been on the decline for the past decade. For these reasons, I am not a buyer at the current valuation as there will be short and long-term risk. I would only be a buyer with a solid margin of safety.