A Lockheed Martin subsidiary that is among the world’s few companies permitted to explore for minerals on the ocean floor has called on governments to clear the path for deep sea mining after years of delays.

UK Seabed Resources said the 167 members of the International Seabed Authority urgently needed to agree on rules for the nascent industry to meet growing demand for metals used in sectors from clean energy to defence.

“These regulations have been a long time in development,” Chris Williams, director of UK Seabed Resources, told the Financial Times. “It’s definitely time to reach agreement on those outstanding issues and get agreed.”

Michael Lodge, secretary-general of the ISA, said this year that a mining code agreed by the UN-backed body’s member countries that had been expected to be passed in July would probably be delayed until next year.

“It’s unlikely we will meet the end in 2020 given that we don’t have a lot of meeting time left,” Mr Lodge said, adding that “there’s a general agreement that nothing is agreed until everything is agreed”.

He said matters still being debated included how deep sea mining would be taxed by the ISA.

Scientists and non-governmental organisations have repeatedly called for a moratorium on the industry to allow scientists more time to study the biodiversity of the deep ocean. TV naturalist David Attenborough warned this year that deep sea mining risked creating “terrible impacts that cannot be reversed”.

But Mr Williams said there was a need to build mineral supply chains that were less reliant on China. Beijing said in July it would impose sanctions on Lockheed in retaliation for a US decision to sell missiles to Taiwan.

“It does appear to be back on governments’ radars,” Mr Williams said. “That’s definitely an area of interest for us, in establishing an alternative source of critical minerals, particularly for the electric vehicle battery market.”

UK Seabed Resources is among 21 companies to have been granted 15-year contracts by the ISA for exploration of deep sea minerals. Others include China’s state-owned Minmetals, Canada-based start-up DeepGreen and Belgium’s Global Sea Mineral Resources. Once the mining code is agreed, the businesses can apply to start mining the deep sea via exploitation contracts. 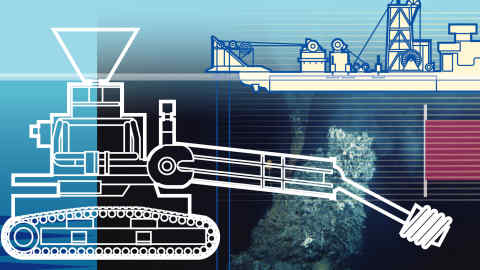 Kris Van Nijen, managing director of GSR, the deep sea exploration division of Deme Group, said he was hopeful the mining code would be adopted in 2021.

The potential is vast: the Clarion-Clipperton Zone of the Pacific Ocean between Hawaii and Mexico alone is estimated to contain roughly 21bn tonnes of nodules.

Mr Williams said the company had surveyed more than 66,000 square kilometres of the Pacific and mapped 235 sq km in high resolution. It hopes to field a prototype vehicle to collect nodules in 2023.