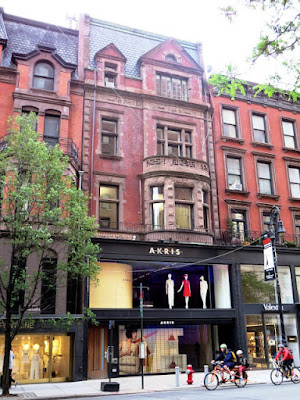 Three buildings on Madison Avenue’s main retail corridor have sold for about 80% below peak sales prices in 2014, reports The Wall Street Journal.

Swiss luxury clothing retailer Akris, a tenant at one of the retail spaces, agreed to pay $45 million for the three properties, according to Eastdil Secured LLC, the real-estate broker and investment bank handling the estate sale.

The properties are located between East 69th and 70th streets, and include three ground-floor retail spaces and a combined 15 residences on the floors above.

The sales price works out to about $1,340 a square foot. That compares to the peak of Madison Avenue retail property prices about six years ago, when a building six blocks away on Madison sold for $70 million, or $7,589 a square foot, according to The Journal.

The sale is slated to close in the coming weeks. It would represent the lowest price recorded in the tony Madison Avenue neighborhood in a decade, according to data from real-estate brokerage Cushman & Wakefield, notes the paper.

This, of course, is an economic consequence of the New York City lockdown which was particularly harsh and the fear which still exists of the relatively mild, for healthy people, coronavirus.

This is probably the most unclear economic period for anyone alive.

You are supposed to buy when there is blood in the streets according to Baron Rothschild an 18th-century British nobleman and member of the Rothschild banking family, but what do you do when so many fear a fairly harmless virus and many have discovered they are able to work productively from home with computers and video conference calls?

At the same time, you have socialist stooges rioting in the streets.

No one knows how this all plays out. This is not a time where you can work the numbers and find a bargain. This is a time of major social shift with much too many moving parts to understand how things will develop.