Lithium Junior Miner News For The Month Of August 2020

Welcome to the August 2020 edition of the “junior” lithium miner news. I have categorized those lithium miners that won’t likely be in production before 2022 as the juniors. Investors are reminded that most of the lithium juniors will most likely be needed in the mid and late 2020s to supply the booming electric vehicle [EV] and energy storage markets. This means investing in these companies requires a higher risk tolerance and a longer time frame.

August was another good month of news and progress for the lithium juniors despite the low current lithium prices.

Benchmark Mineral Intelligence has July global weighted average prices at US$6,184 for Li carbonate, US$8,772 for Li hydroxide, and US$390 for spodumene (6%).

For a summary of the latest lithium market news and the “major” lithium companies’ news, investors can read my “Lithium Miners News For The Month Of August 2020“ article. Highlights include:

Rio owns a large lithium deposit called Jadar, which is yet to be developed. Jadar is a unique, world-class lithium-borate deposit near the town of Loznica in Serbia. Rio plans to start production at Jadar in 2023. They also have a potential US lithium project from their Boron Mine tailings.

Rio Tinto progresses the Jadar lithium project to feasibility study stage. Rio Tinto has approved an additional investment of almost $200 million to progress the next stage of the development of the lithium-borate Jadar project in Serbia. This will primarily fund the feasibility study, including the completion of detailed engineering designs, as well as permitting and land acquisition by the end of 2021, in line with the initial project schedule. Rio Tinto Energy & Minerals Chief Executive Bold Baatar said “Rio Tinto’s lithium project pipeline is an important part of our vision to pursue opportunities which are part of the transition to a low-carbon future. We look forward to working closely with the Government of Serbia over the next eighteen months as we develop and validate our understanding of the project to the point when we can seek a final investment decision by the Board of Rio Tinto.”

Sigma is developing a world class lithium hard rock deposit with exceptional mineralogy at its Grota do Cirilo property in Brazil.

Note: Ganfeng and Hanwa have a see-through ownership of more than 50% of Sonora.

Core 100% own the Finniss Lithium Project (Grants Resource) in Northern Territory, Australia. Significantly, they already have an off-take partner with China’s Yahua ($2.4b market cap, large lithium producer). The Company states they have a “high potential for additional resources from 500km2 covering 100s of pegmatites.”

Core Lithium could be Australia’s next lithium producer 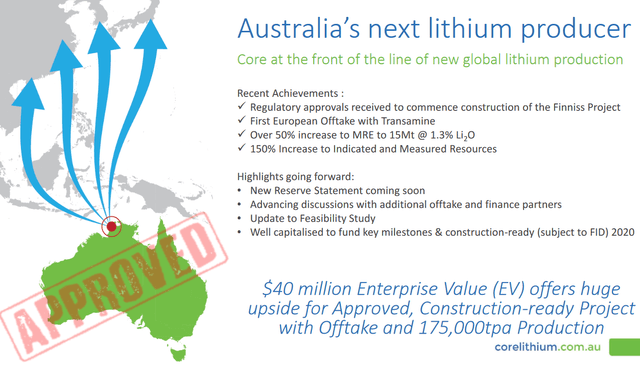 The Mt Holland Lithium Project is a 50/50 JV between Wesfarmers [ASX:WES] and SQM (SQM), located in Western Australia. There is also a proposal for a refinery located in WA. Wesfarmers acquired 100% of the shares in Kidman for A$1.90 per share, for US$545 million in total.

You can view the latest company presentation here.

Millennial has tenements at the Pastos Grande Lithium Project and the Cauchari East Lithium Project, in Argentina. Mining licence and environmental permit has been granted.

You can view the Company’s latest investor presentation here.

Investors can read the latest company presentation here, and an excellent video here. My CEO interview is available on Trend Investing here.

You can view the latest company presentation here.

Argosy has an interest in the Rincon Lithium Project in Argentina, targeting a fast-track development strategy.

Partnership agreement with European Union Body. EIT InnoEnergy, the innovation engine for sustainable energy across the EU. European Metals Holdings Limited is pleased to announce that a support and financing agreement with KIC InnoEnergy SE (“EIT InnoEnergy”), the principal facilitator and organiser of the European Battery Alliance has been entered into in respect of the Cinovec Lithium Project in the Czech Republic (“Cinovec” or the “Project”).

You can view the company’s latest presentation here.

Plateau Energy Metals Inc. (formerly Plateau Uranium) is a Canadian lithium and uranium exploration and development company focused on its properties on the Macusani Plateau in southeastern Peru.

You can view the company’s latest presentation here.

You can read the company’s latest presentation here.

On August 10, Nano One Materials announced:

Nano One enters into a Joint Development Agreement with a global cathode material producer. Mr. Dan Blondal, CEO of Nano One, is pleased to announce that Nano One has entered into a Joint Development Agreement [JDA] with a multi-billion-dollar Asian cathode material producer. This producer, based outside of China, wishes to remain unnamed at present due to the highly competitive state of the lithium ion battery supply chain. The JDA completely aligns with Nano One’s mission of developing, demonstrating, and licensing of its high-performance lithium ion battery cathode material technology. “We are thrilled to be working with a highly respected cathode producer who shares Nano One’s vision to develop and launch a disruptive cathode business” said Mr. Blondal. “This is a defining moment in our evolution and an important milestone in the advancement of our business.”

As usual, all comments are welcome.

Thanks for reading the article. If you want to sign up for Trend Investing for my best investing ideas, latest trends, exclusive CEO interviews, chat room access to me, and to other sophisticated investors with a focus on renewable energy & the EV and EV metals sector. You can learn more by reading “The Trend Investing Difference“, “Subscriber Feedback On Trend Investing”, or sign up here.

Disclosure: I am/we are long GLOBAL X LITHIUM & BATTERY TECH ETF (LIT), NYSE:ALB, JIANGXI GANFENG LITHIUM [SHE: 2460], SQM (NYSE:SQM), ASX:ORE, ASX:GXY, ASX:PLS, ASX:AJM, AMS:AMG, TSX:LAC, TSXV:NLC, ASX:AVZ, ASX:CXO, ASX:NMT. I wrote this article myself, and it expresses my own opinions. I am not receiving compensation for it (other than from Seeking Alpha). I have no business relationship with any company whose stock is mentioned in this article.

Previous PostPalantir to Wall Street: we are not like other tech companiesNext PostIndia’s central bank calls for recapitalisation after coronavirus shock