A senior Libyan official has warned that the fragile ceasefire to end the civil war in the oil-rich north African country will only survive if rival foreign countries stop meddling in the conflict.

Fathi Bashagha, interior minister in the UN-backed government in Tripoli, told the Financial Times that the biggest challenge would be foreign “interference”, or a lack of international support to help Libyans “implement the ceasefire”.

The UN announced the truce on Friday, halting 19 months of fighting that erupted after renegade general Khalifa Haftar launched an offensive in Tripoli against the Government of National Accord.

The conflict rapidly became a proxy war, with the United Arab Emirates, Russia and Egypt backing Gen Haftar and Turkey supporting the GNA. All are accused of violating an arms embargo as Libya was flooded with weapons and mercenaries from Russia, Syria, Sudan and Chad.

The warring Libyan factions have relied on outside support, and Mr Bashagha said Gen Haftar, who controls eastern parts of the country, would not pose a threat if his foreign backers abandoned him.

“He is only dangerous because of the support of foreign countries which provide him with weapons and military equipment,” said Mr Bashagha, who is one of the most influential members of the GNA.

He added that foreign forces supporting the GNA would also have to leave. As well as weapons and air-defence systems, Turkey dispatched Syrian fighters to support forces loyal to the Tripoli government.

Diplomatic efforts to end the fighting in Libya intensified amid mounting fears that foreign rivalries would trigger a broader conflagration on the south Mediterranean.

After Gen Haftar suffered a string of defeats at the hands of Turkish-backed fighters this year, the US military accused Russia of deploying 14 MiG-29 and Su-24 fighter jets to the country.

Egypt then threatened to send troops across its border if forces allied to the Tripoli government advanced eastward past the strategic city of Sirte.

The ceasefire calls for all foreign fighters to leave the country within three months — something that analysts say will prove difficult because they represent a security guarantee for the two sides.

The agreement is supposed to lead to political talks to pave the way for elections next year.

Tarek Megerisi, a Libya specialist at the European Council on Foreign Relations, said the ceasefire reflected an international consensus on the need for a political settlement in Libya. But he added that there needed to be more international pressure on the foreign powers backing the Libyan factions.

“Who will tell the Turks and the Russians to leave?” he said. “The Turks have been sending daily military flights. The Russians and Haftar’s forces have been building defensive structures all the way from Sirte to Jufra [in central Libya]. Will they abandon them?”

Still, Mr Bashagha said the countries that had bet on a Haftar victory had started to review their stance.

“There is a change in the Egyptian position. This is clear. The departure point for Egypt is always its national security,” he said, referring to Egypt’s shared border with Libya.

He added that there also appeared to be “positive change” in Moscow. But he said it was unclear whether the UAE, Gen Haftar’s staunchest supporter and the source of much of his more sophisticated arms, had shifted its position.

Even if the foreign powers retreat from the country, Libya will face huge challenges after years of chaos and violence, with the country in effect divided between east and west.

Both the weak GNA and Gen Haftar are dependent on predatory militias that have carved the country into a patchwork of fiefdoms in the absence of an effective national security force.

In the west there are already concerns that rival factions which united to fight Gen Haftar could turn their guns on each other as the threat from the east recedes. 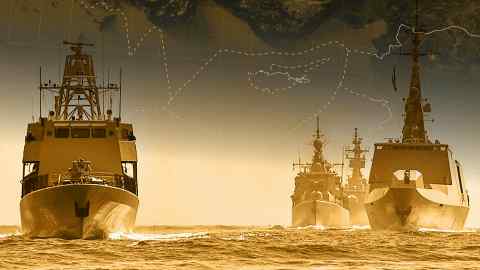 Mr Bashagha, a former air force pilot who was credited with attempting to rein in Tripoli’s militias when he was first appointed two years ago, said his ministry had developed a plan to demobilise local fighters and integrate them into national security forces.

He said the interior ministry had already worked out a classification for militiamen with no criminal record registered under a “green” tag that qualified them to receive training as policemen. But he added that it would be crucial to revive the shattered economy to provide jobs outside the security sectors, something the GNA has failed to deliver since it took office in 2016.

“There’s a need for a programme at the state level, and not just the interior ministry, to rehabilitate and integrate individuals,” Mr Bashagha said.

Mr Megerisi said dealing with the militias was a huge task.

“They have weapons, money and connections and are like mafias,” he said. “They are at the highest level of the state and to remove them from the system will be very difficult . . . [In some towns] they are like an army, so if you give them an order and they don’t want to follow it, what can you do?”