Our long-only “Librarian Capital” portfolio gained 7.1% in USD in August, but a 2.2% appreciation of GBP against USD reduced our reported gain to 4.8% – a slight underperformance vs. the MSCI World index, our chosen benchmark, which gained 5.1%; our year-to-date gain of 5.4% in GBP is ahead of MSCI World’s gain of 4.7%, as we continue to outperform materially since inception, including in 3 of the last 4 years:

Our performance since 2019 – the year we started managing our portfolio full time – as compared with MSCI World, other key indices as well as leading funds with a similar “quality” style, is as follows:

Our portfolio has outperformed its chosen benchmark and key indices over the last 20 months, though we have seen our year-to-date outperformance over MSCI World narrowed from 320 bps at the end of March to 70 bps by the end of August. Compared to the two leading “quality” funds we track, our performance since 2019 is ahead of one but behind another.

The top contributors and detractors during August and year-to-date are shown below; only 4 of our stocks lost money during the month: 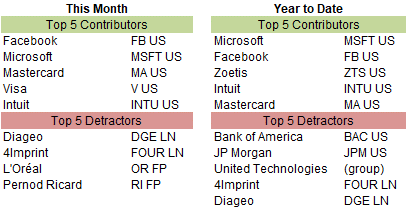 August 2020 was the best month for MSCI World since 1986, and our portfolio benefited from this rally. Each of the top 5 contributors for August saw a share price gain of at least 10%; all were among our top 10 holdings at the start of the month. Losses from the 4 detractors (which were our only non-U.S. holdings) together subtracted approx. 50 bps from our performance.

After the significant portfolio changes in July, August saw only small incremental additions to our positions in Estée Lauder (EL), PayPal (PYPL) and Philip Morris (PM). We did not sell any stock.

Our top 10 holdings at the end of the month, compared to the end of last year, are shown below. These represented 67% of the portfolio’s total value (including cash):

Cash was at 8.1% of the portfolio at month end, compared to 10.3% the month before, largely due to stock purchases.

During August, we downgraded Rightmove (OTCPK:RTMVY) from Buy to Neutral, after a 41.2% gain in the 5 months since we upgraded it to Buy. Rightmove is the #1 U.K. property portal and a business we know well – a similar Buy rating between March and November 2019 also resulted in a substantial (29.6%) gain. H1 2020 results on August 7 were helpful to our investment case in showing a relatively stable customer number (down 3.3% during H1), albeit one maintained with a temporary 75% customer discount, a widening lead in terms of consumer time spent and properties listed, and continuing profitability. However, with shares again trading at over 30x P/E (on unaffected 2019 financials), we believe annualised returns over the next few years will likely be only in the high single digits, and downgraded our rating to Neutral.

READ ALSO  The Fed Has Given Big Business A Huge Advantage

August was a busy month for company results, and we reiterated our Buy ratings on British American Tobacco (BTI), PayPal, Hargreaves Lansdown (OTCPK:HRGLF), Schroders (OTCPK:SHNWF), Estée Lauder, L’Oréal (OTCPK:LRLCF) and Intuit (INTU). While many of these stocks have also enjoyed significant upward re-ratings, they remain attractively priced, in our view, especially given our expectations for “lower for longer” interest rates and the paucity of profitable growth elsewhere.

During the month, we were also interviewed by Seeking Alpha, in a wide-ranging discussion that covered our investment strategy and process, our views on value investing, bargains in U.K. stocks, stock picking in COVID-19, as well as sector comments on tobacco, payments, U.S. cable, U.S. banks, etc. The full interview is available here (PRO subscription required).

Our list of current research ratings on Seeking Alpha, and the stocks’ performance up to the end of August, is as follows: 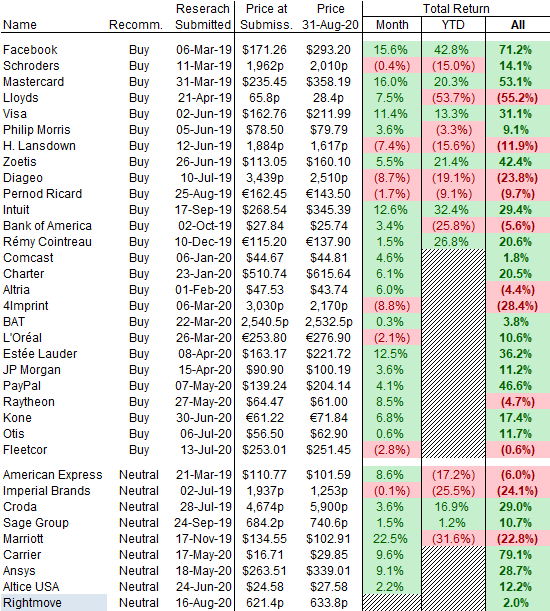 Mastercard (MA) (+16.0%) – MA share price rose throughout August, benefiting from a further upward re-rating as one of the relative winners from COVID-19. (At the end of August, relative to 2019 financials, MA traded at a 45.6x P/E and a 2.0% FCF Yield.) For MA, the outbreak accelerated the move to cashless payments, while the company remains profitable in the meantime. Q2 2020 results, reported at the end of July, showed MA’s purchase volume falling 8.9% year on year (including falling 5.1% in the U.S.), with revenues down 17%, expenses down 5%, EBIT down 25%, and EPS down 26% (all on an adjusted basis and excluding currency). Volumes have stabilised, as confirmed by a subsequent filing by Visa (V) showing its U.S. payment volumes being down 8% in July and 7% in August, including credit card volume down 8% in both months, but debit card volume up 26% and 24% respectively.

Facebook (FB) (Buy-rated) (+15.6%) – FB share price also rose throughout August, as the company benefited from a series of good news. Q2 2020 results reported on the last day of July showed that FB grew revenues by 12.4% (excluding currency) year-on-year during the quarter (Q1 2020: +19.5%), as COVID-19 accelerated the move to e-commerce and to digital advertising. FB’s user and engagement statistics both gained from the lockdown. The company also reduced full-year 2020 expense guidance slightly. The U.S. test launch of Facebook Shop, a tab within the main Facebook app, was positively received by investors. In addition, FB benefited from the potential ban or forced sale of TikTok (BDNCE) in the U.S., having recently launched a similar offering (Reels).

Intuit (Buy-rated) (+12.6%) – Intuit share price rose strongly in the run-up to its FY20 results on August 25, and finished the month trading at 43.9x FY20 EPS. FY20 was another year of double-digit EPS growth (+16.4%), powered by the strongest performance in its U.S. Consumer business for 4 years (revenues grew 13.0% year on year) and a solid performance in its Small Business & Self-Employed (“SBSE”) segment (revenues grew 14.6%). COVID-19 headwinds for SBSE appeared to be moderating, and management expects its revenues to be at least flat in FY21 even in their most adverse scenario (a double-W-shaped economy recovery) or to grow by high single digits if the recovery continues at its current pace. Management also reaffirmed the long-term outlook for double-digit revenue growth and expanding margins.

Estée Lauder (Buy-rated) (+12.5%) – Estée Lauder share price trajectory in August was notable in that it first fell 6.7% on the day of its FY20 results (on August 20), but then more than recovered in the following two trading days. The results themselves followed the pattern of other relative COVID-19 winners, with a significant hit to the current P&L (EBIT slipped into a negative $228m for Q4 FY20) but strong positive signs for the long term, including a sales rebound in China, a dramatic growth in online sales and Travel Retail being better than feared during the quarter.

Marriott (MAR) (Neutral-rated) (+22.5%) – MAR share price benefited from the general market rally. Q2 2020 results reported on August 10 showed the impact of COVID-19, with Revenue Per Room (RevPAR) falling 84.4% year on year and MAR making an operating loss of $154 million. While the shares have lost 22.8% since we downgraded our rating in November, we have continued to stay away from this stock, as we believe COVID-19 may result in a long-term reduction in business travel, were concerned about oversupply in key U.S. hotel markets even before the outbreak, and view MAR’s profitability has overly dependent on its franchisees and hotel owners making money (profit-based incentive management fees were 35% of its EBIT in 2019).

Our inactive previous stock ratings are listed below: 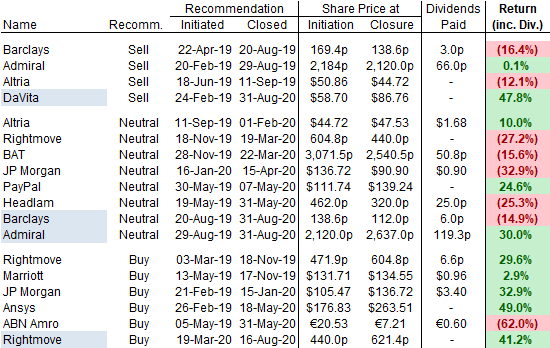 In addition to our Buy rating on Rightmove having been closed, we also removed our ratings on several companies after no new research has been published for a year, including:

DaVita Inc. (DVA) (formerly Sell) – We initiated our Sell rating in February 2019, and shares had gained 47.8% by the end of August. Our key assumption was that dialysis EBIT would continue its decline since 2016, being driven by structurally poor pricing, with price rising at less than 2% a year while costs continue growing faster. We were right about the pricing but wrong about the costs – DaVita started aggressively cutting costs in 2019, reducing U.S. per patient treatment cost by 4.0%, from $247.81 in Q4 2018 to $238.02 in Q2 2020, while also keeping G&A costs roughly flat at just below $28. This meant that, even with per patient revenue rising only 1.2% in this period to $352.26, profit per patient rose by nearly 20%. A small increase in patient numbers and the relatively fixed nature of corporate costs meant that, between Q4 2018 and Q2 2020, adjusted EPS more than doubled from $0.90 to $1.95. We had exited our short at a relatively small loss in 2019, but should have realised the full extent of our mistake and changed our rating as well.

Barclays (BCS) (formerly Neutral) – The Neutral rating on Barclays from August 2019 was the result of an upgrade from a previous successful Sell rating (during which shares lost 15.1% in 4 months). Barclays shares actually rose 32.2% to close at 183.3p in early January, but collapsed in late February and have now lost 14.9% since our rating. Like other U.K. banks, Barclays has seen large Loan Loss Provisions and major Net Interest Margin headwinds as a result of COVID-19, and its wholesale banking businesses proved only a partial offset. As long-term investors, we believe that staying away from Barclays was ultimately the right choice.

Admiral Group (OTCPK:AMIGF) (formerly Neutral) – The Neutral rating on Admiral from September 2019 was also the result of an upgrade from a previous Sell rating. Since then, shares have gained 30.0%, with about half of that gain occurring since June. Our reasons for abandoning our Sell rating proved valid – the company was able to increase its U.K. motor insurance premiums and again release plentiful reserves in H2 2019, pushing full-year Pre-Tax Profit up 10% year on year. COVID-19 was another boost, as the lockdown improved underwriting results by reducing accident frequency, so that Pre-Tax Profit grew 30% year on year in H1 2020. Admiral’s dividend also became more attractive relative to other sectors that were cutting or suspending dividends. We should have recognised the company’s potential better – its 30% gain represented a lost opportunity in a business we know well.

About Librarian Capital: Librarian Capital is a long-only strategy that invests in global equities. The investment style is fundamentals-oriented, concentrated and long term. The portfolio consists of 15-25 high-quality companies in the U.S. and Europe, usually held for multiple years. The portfolio has been in existence since late 2008, and is the main vehicle for my personal net worth.

A full archive of previous monthly updates can be found here.

Disclosure: I am/we are long NEARLY ALL THE STOCKS MENTIONED. I wrote this article myself, and it expresses my own opinions. I am not receiving compensation for it. I have no business relationship with any company whose stock is mentioned in this article.