Lebanon’s sceptical public: ‘These same thieves will come back’

Shards of glass still litter the floor of Imad’s framing shop, some of it from blown out windows, others from his clients’ artworks and broken family photos.

While the city is short of replacement windows in the wake of last week’s explosion at the port, many roads in the east Beirut neighbourhood have been swept clean of crushed glass by volunteers. In the absence of a co-ordinated state emergency response, everyone from Scouts to students have toiled to lift rubble out of homes, clear streets and distribute food.

In a huge protest on Saturday, thousands directed their anger and grief over the explosion, that killed more than 160, injured several thousand and rendered 300,000 people homeless, at the government and political class. By Monday, the whole cabinet had resigned. Lebanon is now in the hands of the same ministers as a caretaker administration, one under pressure to reform the state — a prerequisite for longer-term international aid.

But Imad is one of many sceptical that there will be meaningful change.

“These same thieves will come back,” said Imad, 50, inspecting a colourful print pocked with shrapnel marks from the explosion, and referring to Lebanon’s political elite. Many of his customers’ artworks were damaged in the blast. “It’s a circle,” he sighed, referring to the recycling of old political figures.

No date has yet been set for elections, but even if they take place they will make little difference, he said. The entrenched political classes would keep their grip on power by handing out jobs and buying votes, he said. “Those who give, give orders,” he said in French.

Monday’s resignation by prime minister Hassan Diab and his seven-month-old government leaves Lebanon with its second caretaker government since October. Even before the explosion, Mr Diab’s administration had been widely lambasted for failing to tackle the country’s worst economic crisis in decades. It presided over a financial sector in disarray, with food prices and poverty levels soaring and the country in the grip of mass unemployment.

“The government was so mismanaging everything,” Raoul Nehme, caretaker economy minister after resigning with the rest of the cabinet on Monday, told the Financial Times. “Why do you think it would have a contingency plan [to deal with emergencies]?”

Many say the roots of Lebanon’s political woes lie in the decision to share power through sectarian quotas after the end in 1990 of a 15-year civil war. This resulted in the emergence of a political class of warlords or “chiefs”, who divided power and influence between themselves along sectarian lines. The system produces coalition governments that typically take months to form with endless wrangling between rival factions.

After mass protests at the collapsing economy erupted in October, then prime minister Sa’ad Hariri stepped down. The parties agreed to put in place what they billed as a technocratic administration. But critics say that behind the scenes the old political figures retained their influence. 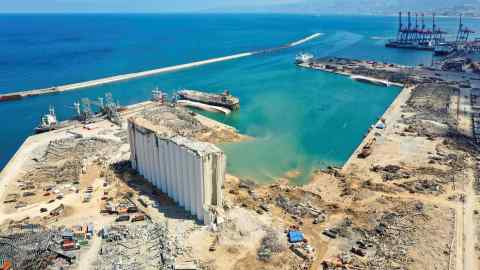 In the next election, Lebanon risks voting for the same confessionally aligned political blocs “that they hate now,” according to Yassine Jaber, an MP in the bloc of Nabih Berri, who has been parliamentary speaker since 1992.

Mr Jaber said parliament must first form a new government and agree to a new election law, which could overhaul or replace the confessional system. In any case, it will be at least six months before polls can take place, he estimated.

The existing political chiefs, who respectively claim to represent Sunnis, Shia and Christians, must “relinquish whatever they are holding back and allow these laws (reforms) to start being implemented,” Mr Jaber said.

The confessional system has had almost three decades to establish its hold on Lebanon’s politics. Many fear that even the blast that wrecked swaths of the capital, is not strong enough to dislodge it.

Mr Nehme said he doubted “very much” that parliament would even back elections, and if they do happen: “Frankly, I don’t think there will be a lot of change.”

“There will be a number of more independent people, but not enough to shift the power,” said Mr Nehme. He was brought into government by Lebanese president Michel Aoun, who occupies the executive post reserved for a Christian and leads the Free Patriotic Movement party.

Mr Nehme and other technocrat ministers in Mr Diab’s government argue that they inherited a rotten system. In his resignation address, Mr Diab accused the entrenched political class of impeding his government’s efforts at reforms, and blamed the explosion on “political corruption”. If a new technocratic government is formed, it could face the same challenges.

It’s not just potential donors who want change to the state — reiterated by French president Emmanuel Macron during a visit to Beirut last week — the demands are also domestic. “If we don’t get reforms, the country will fall,” said Georges Khoury, 57, supervising a bakery in Beirut’s winding Bourj Hammoud district.

The fear remains that the system cannot overhaul itself. Sitting on a plastic chair, a cigarette hanging from this mouth, one shopkeeper doubted real reform would come. “Changing the government won’t change anything,” he said.