Lebanon’s government resigned on Monday as the prime minister blamed “political corruption” for a massive explosion at Beirut’s port killed more than 160 people and devastated the capital.

“I discovered that the system of corruption is bigger than the state,” Hassan Diab, the premier, said in an address.

His resignation came amid mounting anger among Lebanese people with their leaders, whom many blamed for last week’s blast. The explosion was caused by more than 2,000 tonnes of ammonium nitrate, which can be used as a fertiliser but also for explosives, which was stored at the port for six years.

Public fury spilled over on to the streets over the weekend as thousands of people, some carrying effigies of their leaders, called for regime change. But many Lebanese are likely to question whether the resignations will bring genuine change to what they perceive to be a rotten political system.

Mr Diab took office in January after mass protests last year forced the resignation of the previous government. But his government failed to tackle Lebanon’s worst economic crisis in decades, with the financial sector in a state of disarray as food prices and poverty soar.

Sami Atallah, director of the Lebanese Center for Policy Studies, said he doubted that the resignations would usher in the political and social reforms Lebanese are demanding unless an effective transitional administration was appointed.

“This clientelistic and sectarian system breeds corruption and incompetence,” he said, adding that Lebanon’s old guard was “trying to throw the blame on this government and let it take the fall . . . so they distract the blame from them or their cronies”.

The roots of Lebanon’s political malaise date back to the end of its 15-year civil war in 1990 and the decision to share power through sectarian quotas. Critics say this has created an entrenched political class of warlords or “chiefs”, who divide power and influence between themselves along sectarian lines.

Mr Diab’s government was touted as a technocratic administration rather than one staffed with veteran politicians. But his ministers were appointed through the sectarian power-sharing system, undermining the administration’s credibility as it struggled to address the economic crisis that has been exacerbated by the coronavirus outbreak.

World leaders, led by French president Emmanuel Macron, have pledged to provide emergency assistance to Lebanon after the port explosion devastated much of Beirut, causing billions of dollars of damage. But they have insisted that there need to be urgent reforms before they commit further financial aid to help stabilise the economy.

Weeks of talks between the government and the IMF have foundered over Lebanese disagreements on the size of banking sector losses and lack of progress on reforms. 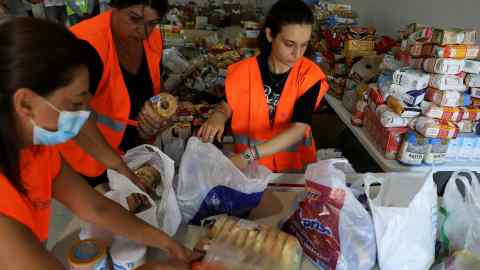 As pressure on the government intensified, Mr Diab had said on Saturday that he would call for an early parliamentary election in an effort to defuse the crisis.

The information, environment and justice ministers had all quit by Monday afternoon, in the wake of a harsh security crackdown on protesters who filled central Beirut on Saturday.

The suspected source of the ammonium nitrate is a shipment of 2,750 tonnes destined for Mozambique in 2013. The ship ran into technical problems during the voyage and docked at Beirut, where officials barred it from sailing further and the ammonium nitrate was impounded at the port.

The failures that led to the blast mostly preceded the current government, but the prime minister’s office has admitted that it was told about the ammonium nitrate store in late July. It passed the file on to the country’s Supreme Defence Council.