Mustapha Adib has been appointed as Lebanon’s prime minister to head a new government tasked with tackling a crippling economic crisis and steering Beirut’s recovery from a huge explosion that killed more than 180 people in the capital last month.

Mr Adib had served as Lebanon’s ambassador to Germany since 2013 and was previously an adviser to former prime minister Najib Mikati. His appointment was confirmed on Monday by President Michel Aoun, after he received the support of a majority of members of Lebanon’s parliament, including Hizbollah, the powerful Shia Islamist party and paramilitary group.

In his first address, Mr Adib pledged to rapidly form a government and to work with parliament to undertake “fundamental reforms quickly”, in co-ordination with the IMF.

The relatively unknown Mr Adib faces the challenging task of rebuilding public trust after decades of failed political leadership. Mass protests erupted across the country in October last year, and sporadic bouts of civil unrest have continued, including in the past four weeks following the blast.

Despite his low profile, some analysts were quick to question whether Mr Adib was far enough removed from previous administrations to win the public’s support.

While Mr Adib is not a political veteran, “he’s seen as more of a Mikati associate than an outsider to the system”, said Mohanad Hage Ali, a fellow at the Beirut-based Carnegie Middle East Center think-tank. Mr Mikati served as prime minister in 2005 and again from 2011 to 2014. The protest movement will probably consider Mr Adib’s appointment as “extending the hand of this political class — basically putting make-up on a dead body”, Mr Hage Ali said.

Mr Adib’s nomination came hours before French president Emmanuel Macron was scheduled to arrive in Beirut on Monday for a second time since the blast.

During his visit three weeks ago, Mr Macron urged the country’s leadership to reach a “new political pact” for the Lebanese people, making it clear that reform was needed if the country was to receive international financial support. Lebanese protesters have also clamoured for reforms and an end to official corruption, denouncing their veteran political leaders’ grip on power.

In response to the French initiative, Hassan Nasrallah, the head of Hizbollah, said on Sunday that his party would be “open to any dialogue”. 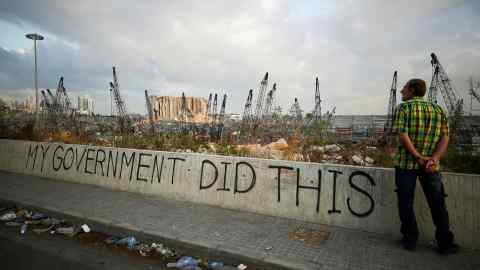 In a rare live televised appearance on Sunday night, Lebanon’s president, Mr Aoun, called for a shift towards a “secular” or “civil” state. The country’s political system has for decades been based on a sectarian power-sharing agreement that divides power between the country’s religious communities — a design that critics say has bred corruption and a lack of accountability.

France, which governed Lebanon from 1920 to 1943 after the fall of the Ottoman Empire, has taken the lead among the international community in pressing for reform, as well as drumming up international financial support. Mr Adib has studied and taught in France, according to his biography on the website of the Lebanese embassy in Germany.

Lebanon badly needs a bailout from the IMF, but talks have been blocked by internal disagreements over the extent of the country’s economic losses and who should bear responsibility. A third key member of Lebanon’s IMF negotiating team, Talal Salman, quit on Sunday.

The economic situation has deteriorated further due to the August explosion. An assessment by the World Bank, published Monday, estimated that the Beirut blast had caused damage costing up to $4.6bn and left businesses with as much as $3.5bn in combined losses.