Lebanon: a nation brought to its knees

It took 15 years of sectarian carnage in Lebanon’s 1975-90 civil war to destroy Beirut, and 15 years more to rebuild it. It has just been laid waste again in barely 15 seconds. The Lebanese have endured wars and invasions, occupation by Israel and by Syria, air strikes and car bombs. And now this.

Tuesday’s gigantic explosion in the port of Beirut shredded vast swaths of the heart of the city. The civil war left a number of shell-shattered hulks, like the old Holiday Inn, to scar the skyline of a rebuilt Beirut. This cataclysm has wrecked buildings all over the centre, shoreline and east of the city. At least 150 dead are accounted for, with many more expected, and some 5,000 wounded. Municipal authorities reckon 300,000 people have lost their homes.

While conspiratorial speculation persists about an attack, the likely cause is more horrifyingly banal. Some 2,750 tonnes of highly combustible ammonium nitrate — used to make fertiliser and explosives — was stored in Hangar 12 in the port, and probably set alight by a fire and blast in nearby Hangar 9.

Some Beirutis well inland from the explosion at first thought it was car bombs, perhaps related to a verdict that was due this week from an international court at The Hague, where four members of Hizbollah, the Iran-backed Shia paramilitary movement, were tried in absentia for the 2005 assassination of former premier Rafiq Hariri, by a huge truck bomb on Beirut’s waterfront.

But the second blast, blowing in windows and doors all over town and filling the streets with dazed and bleeding injured, was vast. And no car bomb makes the mushroom cloud that struck terror into all who saw it.

Beirut has had more than its share of trauma. Before Hariri, the prime minister who reconstructed postwar Beirut, was killed, Rene Mouawad, the president who was supposed to reunite Lebanon at the end of the civil war, was blown up by a huge car bomb in November 1989. In 1982, president-elect and Christian militia leader Bashir Gemayel had a building brought down on him.

Throughout the civil war, Saudis and Syrians, Iraqis and Libyans, Iranians and Israelis used Beirut as their address of choice to communicate by car bomb. Alarmed western powers led by the US and France blundered in, soon to be truck-bombed out: 241 US marines and 58 French paratroopers were blown up in 1983 near the airport in suicide attacks by Hizbollah, which also destroyed the American embassy on Beirut’s Corniche. But there were no mushroom clouds.

As the din of traffic chaos and roaring electricity generators kicking in for almost hourly power cuts is replaced as the city’s ambient noise by the ubiquitous sound of crunching glass that carpets the inner city, it is hard to imagine how Beirut bounces back from this. Or how Lebanon avoids becoming a failed state.

Enraged protesters pelted the justice minister with water bottles on Thursday and stoned the motorcade of Saad Hariri, the former prime minister who was forced to resign last October. When French president Emmanuel Macron visited a shattered neighbourhood of Beirut on Thursday, Lebanese paused from cleaning up debris off their streets to vent their fury with their leaders, chanting: “We want the fall of the regime,” the popular slogan used during mass protests last year that forced the resignation of the previous government.

“A corrupt political class, subservient policymakers and cronies have generated an unprecedented misery, an economic, banking, and financial meltdown,” says Nasser Saidi, a former economy minister and vice-governor of the central bank after the war. “Their endemic corruption, criminal negligence and incompetence have now delivered the Horses of the Apocalypse disaster on Lebanon and the Lebanese.”

When the guns fell silent in 1990, most militias in the shape-shifting conflict between and within Christian, Sunni, Shia and Druze communities had their own makeshift ports. Then Beirut port was rebuilt, becoming the busiest in the east Mediterranean. The project embodied by Rafiq Hariri, a Sunni leader backed by Europe and the Gulf, was to turn Beirut into the capital market and services entrepôt of the Middle East, with its city as regional playground and port as gateway to the Levant.

That vision ignored the dark side of Lebanon — from huge wealth disparities to the endemic corruption and feudal pattern of the sectarian dynasties dominating its politics. It all but evaporated with Hariri’s death, almost certainly ordered by Syria and Iran. And what little remained of it was vaporised this week.

From the 19th century, well before the fall of the Ottoman Empire, Lebanon played an outsized part on the Arab scene. Lebanese Christians, often in alliance with Muslims, were at the heart of the pan-Arab revival, from the printing press to the academy, from nationalism to medicine. Muslims and Christians made a national pact that brought Lebanon independence from France in 1943. Now, Lebanon as the mythic phoenix from the ancient Phoenician coast always able to re-emerge from its ashes is looking crushed.

READ ALSO  How to expose cover-ups in rural China

First, the country is collapsing from a compounded debt, budget, banking, currency and economic crisis. Lebanon is bankrupt. According to the finance ministry, its banking system has lent 70 per cent of its assets to the government, either directly or through the Banque du Liban, the central bank. Lebanon defaulted on its foreign debt in March, for the first time. But total losses in the banking system including the central bank are reckoned by the government to be roughly two and a half times the size of an economy shrinking too fast to measure.

A third of Lebanese are jobless and half live below the poverty line. The Lebanese lira has lost 80 per cent of its value since the crisis erupted with a revolt against the political elites last October. Hyperinflation is near. The middle class is sinking into poverty and the poor are being pushed into destitution. Even before the explosion, the IMF forecast a 13.8 per cent fall in Lebanese gross domestic product this year.

Second, the hollowing out of Lebanon’s institutions by sectarian leaders who treat the state as booty is almost complete. Hizbollah, bolstered militarily by Iran and its battlefield success in Syria’s civil war salvaging Bashar al-Assad’s regime from a mainly Sunni rebellion, has consolidated its power. In 2016 it installed Michel Aoun, leader of the largest Christian party, as president, and two years later, in alliance with the Aounists and rival Shia Amal movement, won a parliamentary majority ostensibly legitimising what it had won by force. With its powerful bridgeheads in the security services, it is a state above the state.

Third, Lebanon is host to an estimated 1.5m Syrian refugees, roughly one in four of the population.

Fourth, as if that were not enough, the Covid-19 emergency, though on official figures less deadly for now than in most neighbouring countries, has squeezed any remaining life out of the economy.

The superannuated warlords in suits, sectarian dynasts and billionaire oligarchs bear responsibility for the first two crises. They have also played a role in the other two crises, insofar as they habitually disdain to invest in public welfare or public goods — such as now overwhelmed state hospitals.

And then, the obliteration this week of so much of Beirut. Even before there is an official account of what caused the explosion, there are indications of negligence on a staggering scale.

Unloaded from an unseaworthy Russian vessel in 2014, the ammonium nitrate stockpile had been there for six years, despite six letters from port authorities to Beirut courts seeking its removal.

It has long been an open secret that Hizbollah controls sectors of Beirut’s port, as it does its airport and many border crossings, for the purposes of extracting revenue and smuggling — western and regional officials say it has accumulated an arsenal of hundreds of Iran-supplied missiles.

Indeed, as part of the now paralysed talks with the IMF on a rescue package, the fund and lead donors such as France insisted on a range of reforms including an end to Hizbollah’s extralegal control of the port.

Hassan Nasrallah, the Hizbollah leader, on Friday pugnaciously denied any responsibility for the disaster. Like most of Lebanon’s ruling class, he has been mute in the face of dire emergency — and the boiling anger of volunteers left to clean up the devastation by themselves.

After this week, rage against these political clans that treat their people not as free citizens but supplicant clients can only grow. No one trusts the government to investigate a tragedy in which powerful players are complicit. There are calls for an international inquiry to avert a cover-up.

Melhem Khalaf, the respected head of the Beirut Bar Association, told Al Jazeera the government was already launching a “pre-emptive attack to vilify the judiciary and muddy the waters”.

“This government was entrusted to do something on reform but the political system doesn’t want to do it”, says one international official. “It’s very difficult to see a solution if some of the key players remain in place.” 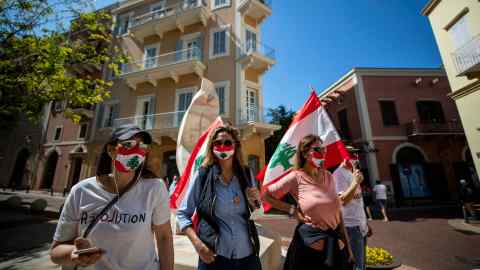 Mr Macron, who was warmly received on Thursday in the streets of Beirut, where almost no Lebanese politician would dare appear, insisted there would be no international bailout without real reforms.

“If reforms are not carried out, Lebanon will continue to sink,” he said. “What is also needed here is political change. This explosion should be the start of a new era.” He added that there needed to be a thorough audit of the central bank.

That requires the political clear-out called for by last October’s civic uprising — and rallying a nation that has been brought to its knees.