LCI Industries Is A Hold (NYSE:LCII) 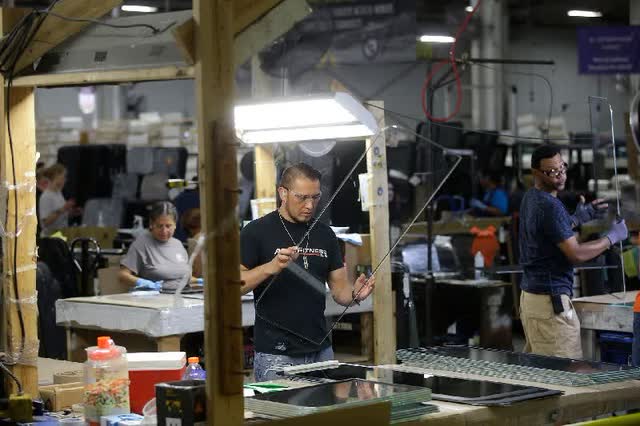 COVID-19 practically brought business activity to a halt in March and April. It hurt the RV industry in particular, as temporary shutdowns of manufacturing plants caused revenue to fall hard. LCI Industries (LCII) was negatively impacted by knock-on effects of COVID-19. The company reported revenue of $525.77 million, down 16% Y/Y. 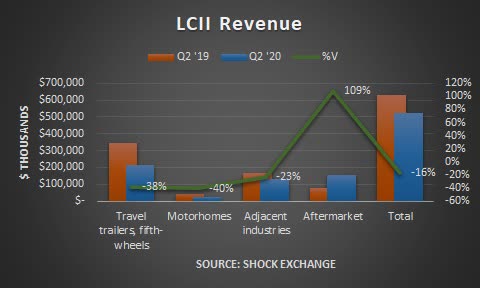 LCII supplies components and original equipment manufacturers (“OEMs”) for the RV industry and industrial products. Three of the company’s four main product segments experienced revenue declines. Combined revenue from Travel, Trailers, Fifth-wheels and Motorhomes fell 38% Y/Y to $237 million. RV shipments through July were down about 10% Y/Y. Shipments fell due to a disruption in manufacturing due to COVID-19. This hurt sales of Travel, Trailers, Fifth-wheels and Motorhomes during the quarter. They represented a combined 45% of revenue, down from 61% in the year earlier period. This revenue stream could bounce back if RV shipments continue to rise.

Management believes vacation via RV could become extremely popular over the near term:

“While a recent report from AAA said 97% of American vacations will consist of a road trip this year, many people are hesitant to stop off at restaurants, hotels and even restaurants while on the road. With an RV, all of these amenities are made available in the vehicle providing both safety and convenience that consumers are looking for.”

Acquisitions and the negative effects of the coronavirus created noise during the quarter, but overall, margins fell. Gross margin was 24.5%, up about 90 basis points versus the year earlier period. Gross profit of $129 million fell 13% Y/Y. SG&A costs were $108 million, up 30% Y/Y, primarily due to acquisitions. SG&A as a percentage of revenue was 21%, up from 13% in the year earlier period. As acquisitions become better-integrated, LCII should be able to garner efficiency gains.

EBITDA of $45 million fell 47% Y/Y. EBITDA margin was 8.6%, down 490 basis points versus the year earlier period. If revenue stabilizes, then LCII could be able to expand EBITDA margins into the double-digit percentage range again. The key could be management’s ability to rationalize costs borne from acquisitions.

LCII has $62 million and working capital of $387 million, down from $400 million at year-end. Free cash flow (“FCF”) through the first six months of the fiscal year was $88 million, down from $144 million in the year earlier period. The company cut capital expenditures for the first six months to $15 million versus $36 million in the year earlier period. Management was able to maintain positive FCF despite disruptions caused by COVID-19. If cash flow continues to rise, then LCII should be able to grow liquidity amid an uncertain economy.

LCII has an enterprise value of $3.2 billion and trades just under 14x last 12 months (“LTM”) EBITDA. The stock has likely benefited from the melt-up in broader markets, yet future growth from reopening the economy or from pent-up demand for RVs is likely priced in.

LCII is up over 15% Y/Y, yet the upside appears priced in. I rate LCII a hold.