There’s no better time to be monitoring up-to-the-minute economic data than the time we are in today, with the post COVID-19 crisis leaving perhaps more uncertainty and industry shakeout potential since the Great Depression, or at the very least since the “Great Recession”. For a company like Summit Materials, Inc. (NYSE:SUM), primary shareholder (with 97.2% of outstanding LP units) to Summit Materials LLC, these numbers (especially housing starts) are particularly interesting as they have experienced wild month-to-month swings as the lockdowns have taken effect, and then been relaxed, and then have been tightened in some places throughout the U.S. as we sit in the middle of a balmy (at least for me) July.

The first report I’ll highlight is the June 2020 Advance Monthly Sales For Retail And Food Services report, released on Thursday, July 16. The reason I bring this up is the shocking increase as it relates to Summit not only for May 2020’s incredible YOY increase, but also the YOY increase for June: 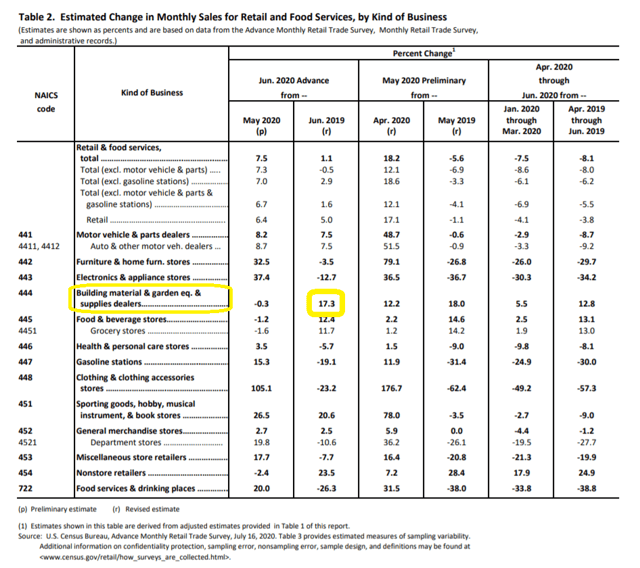 What this indicates to me is the “snap-back” phenomenon that some economists predicted in a “V-shaped” recovery, which while it most obviously hasn’t applied for many parts of the U.S. economy, it does seem to be characteristic of the events unfolding in industries such as building materials.

How much of that increase is due to garden equipment and how much can be attributed to building material is up to interpretation, but that’s where this next report comes in, the latest June 2020 Monthly New Residential Construction report, released also around the same time on Friday, July 27, 2020. 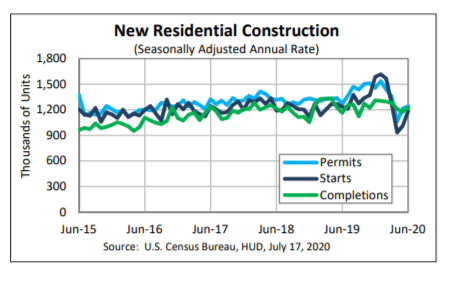 As it looks graphically, there was an obvious sharp decline during the lockdowns, but it appears that a return to the trend line isn’t any kind of impossibility.

Putting the following numbers into context: 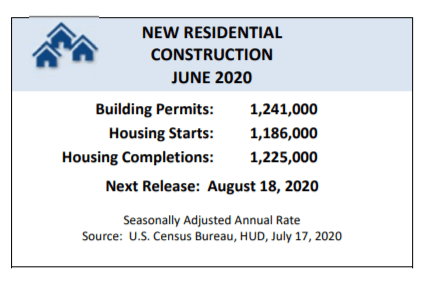 Comparing today’s latest numbers to previous highs and troughs, the peak for U.S. housing starts was over 2 million in early 2006, and the lows sat below 0.6 million at the end of 2009 (information sourced from the latest 10-K from VMC). The fact that housing starts never fell below 0.9 million units at the worst of COVID lockdowns and the fact that they’ve rebounded nicely since then is reason enough to be bullish on all sorts of companies (DHI, KBH, TOL, LEN, NVR, UFPI, WMS, MLM, USCR, EXP) that benefit nicely from a return to more building activity. 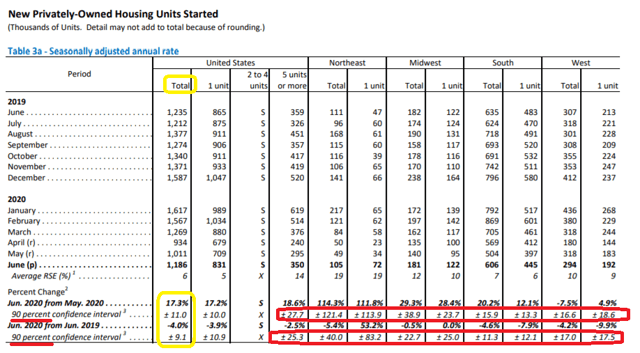 Tough luck here – the numbers are promising, but the confidence interval is so high that the real data could swing enough to wipe out many of these growth data points, making them insignificant. But let’s move on to housing construction.

A note about the confidence interval figures from the “Explanatory Notes” in the same report:

“All ranges given for percentage changes are 90 percent confidence intervals and account only for sampling variability. If a range does not contain zero, the change is statistically significant. If it does contain zero, the change is not statistically significant; that is, it is uncertain whether there was an increase or decrease.” More information here.

Here’s what we see for New Privately-Owned Housing Units Under Construction, which is more relevant to building materials companies like Summit especially when combined with the housing start data: 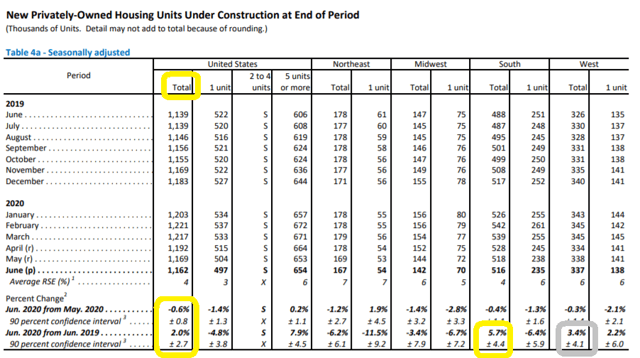 I’m looking this as strength in the South region, with the Northeast and Midwest still up in the air, and the West having a greater possibility than the Northeast/Midwest at having stronger YOY growth there.

I’m not going to link New Privately-Owned Housing Units Completed, because the confidence intervals are like the ones for new housing starts – very high indicating potential extreme variability in the actual results.

A brief refresher on the business model for Summit, with geographical segment representation displayed below: 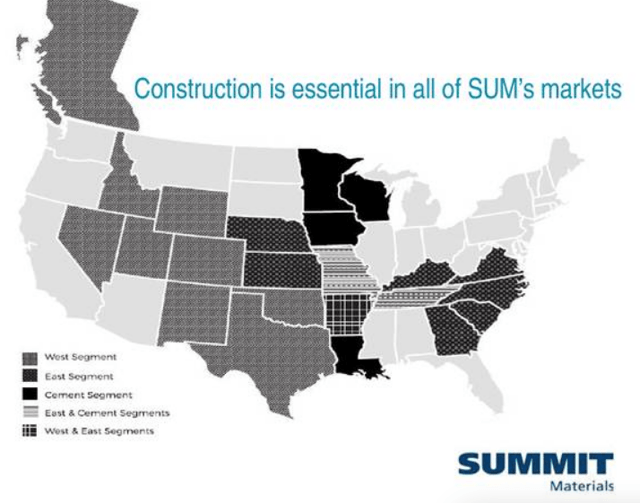 More specifically, the data (revenue as a percent of total revenue, 2019) as it pertains to each state:

Texas is considered the South region by the Census Bureau (source), which I hope you’ve realized is the one released the Housing Starts report as you’ve been following along (no hard feelings either way lol)… while Summit here considers it part of its West segment and it remains its biggest state in terms of revenue. Recall above that the South region was what I perceived as the strongest performer as it pertained to the June 2020 growth in construction statistics.

Going back to the three other largest states for Summit – Kansas, Utah, and Missouri – these are considered Midwest, West, and Midwest, respectively. That could mean that Utah could also be a tailwind as well, but this will require more monitoring on the West region as more data is released. As for the two Midwest states, no help there – it’s still anybody’s guess. Moving along.

Possible Political Developments Ahead of the Election

I really like this visualization as a representation and reminder of the core of the building materials/aggregates industry, as shared in the Summit 10-K:

READ ALSO  The Reckitt Benckiser share price is cleaning up! Here’s what I’d do right now

It becomes most helpful when you consider the possible political impact to building materials companies like Summit, which surged on July 16th on predilections that a Trump administration-led infrastructure plan could be on the way.

Keeping in mind the differences in the various businesses within the industry helps to determine just how impactful such a bill could be. In other words, the payoff won’t necessarily be equal even if a rising tide lifts all ships.

A great comparison of this is that while Summit Materials has 38% of its revenues from public infrastructure and the rest from private construction, its competitor, industry leader and S&P 500 component Vulcan Materials estimates a 44% contribution to its aggregates demand from public (infrastructure) construction. At a higher base for Vulcan of $4.98B in revenues (compared to Summit’s $2.26B), this represents a greater coverage, and perhaps potential, in respect of sheer size and scale.

Both companies estimate that the U.S. Aggregates Industry is highly fragmented, with the top 10 companies only making up about 33-35% of total market share. This could be for two reasons:

2) The industry could still be in a growth phase in the sense that there are still many acquisitions to be made of regional players, for reasons such as #1.

Which brings us to one of the stealthy competitive advantages for Summit, and that is its strategic placement alongside the Mississippi River. More specifically, the company transports much of its concrete by barge through there, as shared in the annual report:

“Our dry process cement plants in Hannibal, Missouri and Davenport, Iowa were commissioned in 2008 and 1981, respectively. These low-cost cement plants have efficient manufacturing capabilities and are strategically located on the Mississippi River and complemented by an extensive network of river and rail fed distribution terminals. Our terminal network can accept imported cement to supplement our internal production capacity as demand and market conditions dictate. Due to the location of our Hannibal and Davenport plants on the Mississippi River, in 2019, approximately 63% of cement distributed to our terminals and customers was shipped by barge, which is generally more cost-effective than truck transport.”

Sure the cement segment is a smaller contributor for Summit right now, but an advantage like that could always produce growth in more ways than one.

Next I will utilize a reverse DCF to attempt to estimate the assumptions that are built into the market’s current valuation of Summit, and then make a general comment on whether it sounds reasonable or not. For free cash flow estimations, I will use two different formulas and present both (since the calculation for FCF can vary depending on who you’re talking to).

READ ALSO  SE: Breaking Up Google May Not Be the Right Answer, Says Rep. Ken Buck

Note that as it pertains to Summit and the building material industry in particular, acquisitions are a key feature of these businesses and so FCF estimations can be wildly incorrect depending on assumptions. Remember that valuation isn’t a black box (hat tip to Professor Damodaran).

A few comments on the two stages of this reverse DCF valuation model: for this case I’m going to project a 10-year Growth Stage (at varied rates) and a 10-year Terminal Stage (at 3% CAGR).

Estimating FCF at $1.61 per share (2019 estimate) means that at $18.26, the current share price for Summit, Wall Street could be projecting 6% growth and discounting it at 12%, both of which I believe are very conservative and would be a bullish signal if true.

With a lower FCF per share, I lowered the assumed discount rate from 12% to 9%, which is still conservative by most standards, and was able to keep the projected growth rate at 6%. Still seems to be a bullish signal at these assumptions.

For this final FCF estimation, I kept the FCF variable. Meaning, I kept the discount rate at a reasonable 9%, and pushed the growth rate estimation to 10% (to match recent trends in operating profit growth over the last several years), and inputted it into my reverse DCF model to see how low FCF could go to arrive at today’s Wall Street value of $18.26. That’s bullish, again, assuming that FCF can be confidently estimated at $1.00 per share or higher.

There are a wide variety of reasons you can be bullish on Summit Materials, and I’ve presented many here today. While I won’t be personally buying shares in the company, as I’ve restricted myself to only buying dividend paying stocks, I still found the analysis worthwhile and enlightening – and I hope that you have too.

Disclosure: I am/we are long UFPI. I wrote this article myself, and it expresses my own opinions. I am not receiving compensation for it (other than from Seeking Alpha). I have no business relationship with any company whose stock is mentioned in this article.