The trade war between China and the United States shows no sign of abating. After Huawei, the Chinese telecommunications equipment supplier, it is now the turn of the main semiconductor manufacturer which could be targeted by the U.S. Commerce department on security grounds. Hence, SMIC (Semiconductor Manufacturing International Corp. (OTCQX:SMICY)) could be the next on the list.

SMIC has up to now denied that it poses a security threat. The company has insisted that its product offerings included chips and services are only for civilian use.

However, this denial had little impact on the financial markets.

Thus, on September 7, within hours of some sources mentioning that the U.S. is probing potential ties between SMIC and the Chinese People’s Liberation Army, SMIC’s stock quoted on the Hong Kong stock exchange lost more than 20% of its value.

There were other collateral damages too.

Hence, chip equipment stocks like Lam Research (LRCX) sunk 5.3% while Applied Materials (AMAT) was down 6.7% and finally, KLA (KLAC) underwent a 6.7% downside after the news. This followed a wider rout encapsulating the wider tech industry the week before.

Figure 1: The way U.S. actions against Huawei and the pandemic impacted chip equipment stocks, compared to the tech sector (XLK) and S&P 500.

The reason for so many semiconductor equipment manufacturers suffering as a result of a Chinese manufacturer “possibly being impacted” is a cause for concern for investors who have invested hard-earned cash in the hope of seeing an increase in demand resulting from digital transformation trends.

It is therefore important to explore the root cause of this concern and for this purpose, I analyze the supply chain for semiconductors (semis).

The supply chain and stakeholders

First, SMIC is one of the leading semiconductor producers in China. As such, in case there is a ban preventing Lam Research to export equipment or services to the Chinese company, this would seriously undermine the latter’s activities.

The company would no longer be able to use vital equipment it currently uses to manufacture and test its chips. The reason is that despite the fact that SMIC has already purchased machinery for making chips, it still needs the US company for software updates, maintenance and spare parts.

Furthermore, according to the South China Morning Post, SMIC is highly dependent on at least ten U.S. suppliers followed by some Chinese ones for silicon chips production equipment. There are also others from Taiwan, South Korea and Japan who, as political and economic allies may also follow the U.S. lead to ban exports of chip-making gear to China, in case such a ban materializes.

Looking further, Lam Research derives as much as 34% of revenues from China and 1.1% of revenues from SMIC and is one of the Chinese company’s biggest suppliers. Shortfalls could amount to $30 million according to Q2-2020 revenue figures.

However, there are other suppliers in the same boat including AMAT, KLA and Holland-based ASML N.V. (ASML). 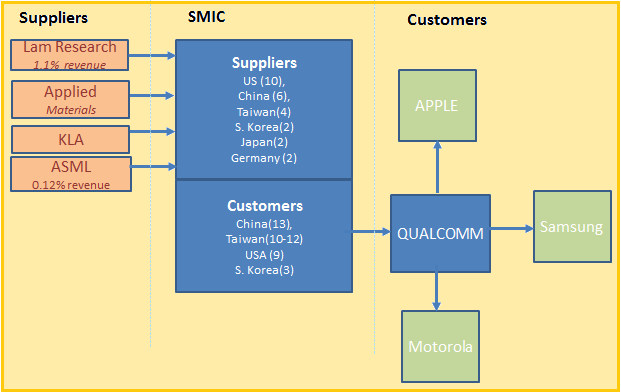 Moving further along the line to customers this time, SMIC’s clients also include the likes of Qualcomm (QCOM), a huge American based chip designer with a $125 billion market cap.

Qualcomm has been working with SMIC in connection with 28nm process technology and wafer manufacturing services in China since 2014 for its famous Snapdragon processors which are purpose built for mobile devices.

Hence, I checked whether Qualcomm’s stock had been impacted in the same way as the semiconductor equipment manufacturers.

This has not been the case and the reason for this may lie in the company’s ability to work towards finding alternative chip manufacturers.

Alternatives include Taiwan’s foundries including TSMC (TSM), United Microelectronics (UMC) and Vanguard International Semiconductor and there has been reports that Qualcomm’s executives have approached these three companies for potential orders shifts.

This means that these companies will in turn have to boost production capacity and one of the solutions could be acquisition of capital goods from the likes of Lam Research.

In this context, back in June this year, TSMC announced that it would be investing in a semiconductor manufacturing plant in Arizona. At that time, the move was seen as crucial to keep chip manufacturing capability within the U.S. The possibility of the project requiring subsidies has also been invoked.

At that time, expectations were of TSMC to spend about $12 billion between 2021 and 2029 on plant and production lines.

UMC has also purchased equipment (in 2016) for its 12-inch wafer fab both from Lam Research and Tokyo Electron (OTCPK:TOELY).

This means that Lam Research has competitors not only in the U.S. but internationally.

Starting from the strategic perspective, the semiconductor industry is anticipated to reach a market value of $417 billion in 2020, up 1.2% year-on-year amid the COVID-19 outbreak.

Equally important, there were about 209,000 manufacturing jobs in the industry in 2019 with employee productivity now figuring in the agenda to be more competitive.

In this case, Revenue per Employee, obtained by dividing total revenue for the last twelve months by the current number of full-time employees is at $889K for Lam Research. More importantly, net income per employee is more than the second best contender, KLAC by 30%.

This signifies that Lam Research has the best labor productivity among peers.

Next, Cash per Share of $46 is also the highest among peers but so is the Debt to Equity ratio of 115, with the exception of KLAC. This said, these two U.S. based manufacturers enjoy higher operational efficiency. 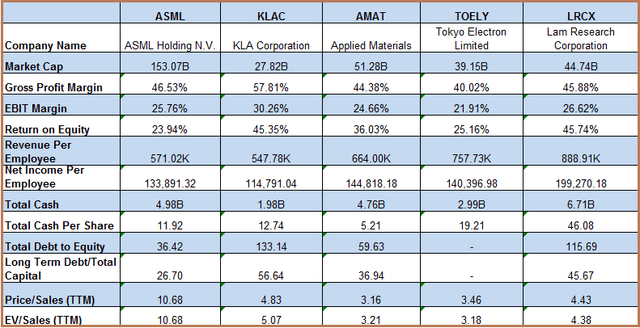 Looking across the industry, Lam Research’s recent strategic agreement with VELO3D, a digital manufacturing innovator pertaining to the use of metal additive manufacturing (“AM”) applications is an important positive.

The new manufacturing technique starts with a CAD (computer aided design) file engineers produce as a result of product design. With AM, the metal parts of the equipment being manufactured are produced using lasers to fuse fine metal powder, layer by layer similarly to a 3D printer. Investors can envision the metal printer seamlessly printing out complex designs that are too difficult or costly to manufacture using conventional methods. 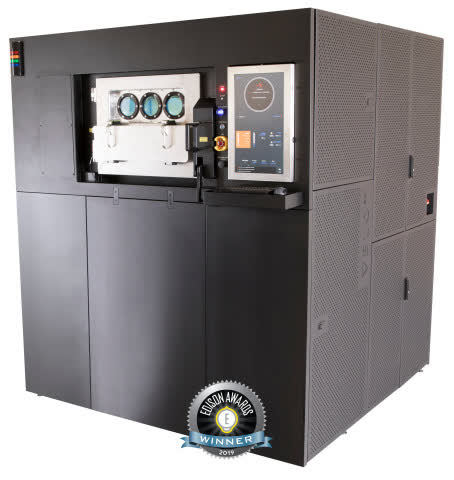 Finally, in terms of costs, this signifies a reduction in amount of raw materials used to fabricate the same capital equipment with the potential to augment Lam Research’s competitive advantage meaningfully.

Given the intricacies of the supply chain, it is improbable that the ban on SMIC will materialize until U.S. companies have secured their supply chains.

The reason is that semis are the very ingredients which enable the development of new technologies like 5G and IoT which in turn form the basis of new areas of growth for the economy.

Hence, the Department of Commerce is unlikely to initiate any drastic move that may affect designers and producers of integrated circuits in the US where a large portion of the stakeholders are located.

Furthermore, Huawei as a supplier of finished goods and SMIC as one which manufactures components used in many electronic devices are two distinctive propositions altogether.

Hence, the aim behind these “ban warnings” on SMIC could be a well-elaborated strategy aimed at ensuring that U.S. companies are taking necessary measures to review export and sourcing policies.

As a matter of fact, new rules requiring licenses for U.S. companies to sell certain items to companies in China that may support the military were brought in April this year.

Also, in the worst case scenario that the US authorities do implement a ban on transactions with SMIC, demand in other sectors, namely increase in video resolution for 5G is likely to offset shortfalls from China by increasing demand for NAND storage content as a result of remote work and entertainment.

Hence, according to the executives, “a 2x resolution improvement in mobile video drives roughly a 70% increase in NAND storage content and newer server architectures are expected to have over 30% more memory channels versus prior generations”.

Still, in the absence of an exact time frame and with companies from China constituting up to 34% of Lam Research’s revenues in Q2-2020, it is important to look for additional guidance.

In this context, some researchers at McKinsey have different scenarios for semis taking into consideration the evolution of the coronavirus threat and postponement of some investments because of the uncertainty factor.

They look ahead to 2021 for most end markets to recover except for some bright spots constituted by the likes of wired communications which, according to them “could exceed pre-COVID-19 forecasts due to continuous remote work and homeschooling”.

Others are more bullish.

Hence, analysts from Stifel are “incrementally more positive” on wafer fab equipment spending for the next year and see “more upside when all is said and done” despite the near-term uncertainties.

Furthermore, Stifel, citing valuations after the recent selloff has upgraded Lam Research with a $352 target together with other semiconductor equipment companies.

However, adopting a more realistic stance based on Lam Research’s lower trailing Price to Sales ratio of 4.43 compared to KLAC’s 4.83, I come up with a price target of $345-347 and this, stretching over a period of 6-9 months.

I further support my bullish position in this uncertain environment by stressing on the fact that two of the guarantors of success are quality of human resource and ability to use innovation for further improvement of operational efficiency.

In this case, Lam Research possesses both and additionally, cash position of $6.7 billion as of June 30 is more than eight times those currently generated from quarterly operations.

The company which also offers a dividend yield of 1.65% is a buy with a potential 9% upside but do expect volatility along the way.