Kyrgyz president offers to resign after Russia warns of ‘chaos’

Kyrgyzstan’s president has offered to resign to end a constitutional crisis in the central Asian country that regional power Russia warned had descended into “chaos”.

Sooronbai Jeenbekov’s hold on power has been in doubt since opposition groups this week claimed to have seized control of key ministries and security agencies and declared his position illegitimate.

The opposition’s move followed mass protests against the results of Sunday’s parliamentary election that observers said was rigged.

“I am ready to resign from the presidency as soon as the current situation is brought to a legal basis, all government agencies and the government are given authority, and the country is on the right path,” Mr Jeenbekov said in a statement on Friday.

The unrest has unsettled Moscow, which is acutely sensitive to popular protests and political turmoil in post-Soviet states within its sphere of influence. In Kyrgyzstan, which borders China, two presidents have been toppled by popular revolts since 2005.

While Kyrgyzstan’s cabinet resigned this week and the country’s election authorities annulled the results of Sunday’s poll, opposition factions have squabbled over how to form a new administration, leaving the country — which hosts a Russian military base and a major Canadian-owned gold mine — with a power vacuum.

Mr Jeenbekov’s offer to stand down appeared to end speculation that he had fled the country or gone into hiding following the unrest, in which protesters defaced his office, and freed his predecessor from jail.

Kyrgyzstan is a member of the Eurasian Economic Union and the Collective Security Treaty Organisation, two Moscow-led trade and defence pacts.

The country’s political upheaval is the third major crisis to erupt in Russia’s neighbourhood in recent weeks, following mass protests in Belarus against the continued rule of Alexander Lukashenko and the outbreak of war between Armenia and Azerbaijan, both allies of Moscow.

President Vladimir Putin’s spokesman on Thursday said the Kremlin was “deeply concerned” at what it saw was “a messy and chaotic situation”, and reiterated Moscow’s position as the region’s de facto mediator. 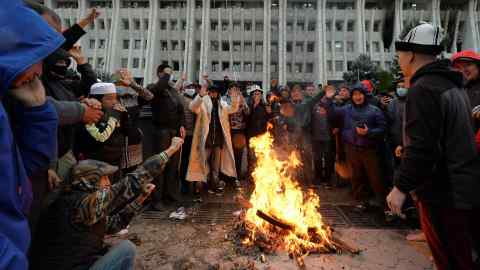 Eleven opposition parties rejected the results of Sunday’s election, in which the majority of votes were declared in favour of parties close to Mr Jeenbekov. Observers said the poll was marred by allegations of vote-buying.

In a sign that the political impasse could be easing, two competing candidates for the post of prime minister said they had reached a power-sharing deal, local media reported on Friday.

“The political situation in the country has become tense,” Mr Jeenbekov said in his statement. “I urge political parties not to divide the people and not to disrupt society.”

Previous PostAlberto of the Antarctic – Argentina doubles in size, or so it claims | The AmericasNext PostUS layoffs still high, but so is skepticism on jobless data