The emir of Kuwait, one of the Middle East’s elder statesmen, has died aged 91, state television announced on Tuesday.

Sheikh Sabah al-Ahmad al-Jaber al-Sabah, who died in a US hospital after a long illness, had ruled the Gulf state since 2006. Previously foreign minister for almost 40 years, he was a widely respected diplomat on the global stage, helping to mobilise an international coalition against Iraqi occupation in 1990.

Sheikh Sabah’s half-brother, Crown Prince Nawaf al-Ahmed al-Jaber al-Sabah, is expected to be announced as the new emir of the oil-rich state.

Sheikh Nawaf, 83, who has held a variety of government and military positions, took over government responsibilities in July when Sheikh Sabah flew to the US for medical care following surgery. Challenges facing the new emir include the struggle to contain the coronavirus pandemic and a ballooning deficit and liquidity squeeze amid lower crude oil prices.

The appointment of the next heir apparent in the coming weeks will be keenly followed by Kuwaitis looking for a change of direction under a new generation of leaders as the country grapples with a range of issues, including a series of corruption scandals. 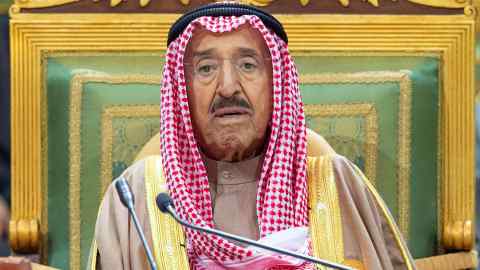 “This should give momentum towards changes in leadership that have been on the cards for several years,” said Theodore Karasik of Gulf State Analytics, a US-based research firm. “Governance is increasingly focusing on how to reverse these scandals. The emir’s passing is a motivator to institute necessary laws.”

Kuwait has the Gulf’s freest political system, and parliamentary elections are scheduled to take place in late November. The fractious relationship between elected lawmakers and appointed ministers has hampered policymaking in recent years, restraining economic development.

READ ALSO  Insider Weekends: Director Of Selecta Biosciences Purchases Over Half A Million Dollars' Worth Of Stock

While sitting on vast sovereign wealth, the country is facing a liquidity squeeze by the end of 2020 as it burns through reserves to sustain public spending.

Last week, rating agency Moody’s downgraded the country, citing delays in passing a new law allowing the budget to be funded by debt or the ringfenced $550bn sovereign wealth fund.

Sheikh Sabah’s government career harked back to Kuwait’s era as a British protectorate. After independence in 1961, he was appointed foreign minister, developing a reputation as a mediator in regional and international disputes.

He was instrumental in defusing tensions between Oman and the United Arab Emirates in 2011 over an alleged Emirati spy ring in Muscat.

In 2017, he refused to follow the lead of Gulf heavyweights Saudi Arabia and the UAE when they led a trade and travel boycott against Qatar over accusations of support for Islamist extremism. Instead, he attempted, with little success, to mediate the ongoing dispute that has divided the Gulf states amid growing tensions with rival Iran.