Kuka Doesn’t Have What It Takes To Outperform Its Industry (OTCMKTS:KUKAF)

I have written several articles on robotics companies over the past couple of months, and I plan to continue until I find “A Few Good Men” worth my investment. I am very bullish on the robotics industry, and for this reason, I am determined to invest in a couple of robotics companies. KUKA AG (OTCPK:KUKAF) is the fourth robotics company that I have analyzed. Out of these four companies, I am only bullish on Yaskawa (OTCPK:YASKY).

Kuka has the same risks as most robotics companies do. Risks like geopolitical risks, exchange rate risks, and for the ones traded on the OTC markets, liquidity risks. That being said, Kuka is owned by Midea Group, which is a Chinese company. I am concerned with what could happen to Kuka if the over two-year-long trade dispute between China and the United States ends on a negative note.

As I mentioned above, I have written several articles about companies in the robotics industry, and I would encourage you to read the one on Fanuc to get a very detailed understanding of the industry.

From 2013 to 2019, the CAGR for new robotics installations is estimated to be 15.5%. As the International Federation of Robotics (aka IFR) has not yet released the number of installations for 2019, the CAGR could increase or decrease by 10 to 20 basis points according to my estimates. In IFR’s 2019 executive summary for industrial robots, they provided us with an estimated growth rate for the industry. This growth rate (CAGR of 12%) did not take into consideration the adverse effects of COVID-19, so I had to use past data to estimate these effects. 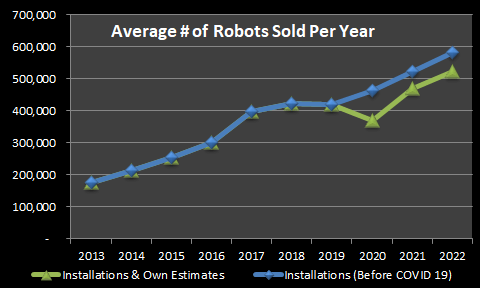 As seen in figure 1, I attempted to use historical data from the financial crisis of 2008 to predict what could occur this year and in the subsequent years. Using these estimates, I arrived at a CAGR of 7.5% for the period 2019 to 2022.

The industry has always been overly dependent on the automotive industry and the Asian market. Nowadays, the robotics industry is more diversified throughout various sectors and has expanded beyond Asia, Europe, and the United States. Also, as automation technologies improve, small- and medium-sized companies that have hardly any automation are beginning to use automation, according to Kuka’s 2019 Annual Report. As smaller companies began to use automation, installations should increase exponentially, in my opinion.

My Take On The Industry

Up until 2018, companies in the robotics industry were very profitable due to the significant growth in sales. Only that during this period of high demand, the companies overgrew their corporate structure for whatever reason. I believe that a majority of companies in this industry got too enthused with demand growth, and they exaggerated their organizational structures. It reminds me of my time in the Army, where I saw recruits buying 30 to 50 thousand dollar vehicles because they were overenthusiastic with the fact that they now had money. The difference here is that my guys were 18 to 19 years old and were not 40- to 60-year-old executive directors of large corporations.

Overview Of Kuka And Its Operations

2019 was not a good year for Kuka due to the geoeconomic uncertainties (China and US trade dispute). According to their 2019 Annual Report, around 50% of KUKA’s total sales revenue is generated from the automotive market. Since the automotive industry took a hit due to these trade tensions, so did Kuka.

At the beginning of the year of 2019, Kuka introduced its new organizational structure called KUKA Business Organization (aka KBO). KBO has five business segments: KUKA Systems, KUKA Robotics, Swisslog (Logistics Automation), Swisslog Healthcare (Healthcare), and China. Under KBO, the individual divisions were given greater responsibility. I had a little Dejavu when I read this in their annual report because it seems a lot like what ABB began doing in 2018. In my opinion, there is still a resemblance of a regional structure under the KBO plan.

System Division: This division makes custom made solutions for automation in the automotive industry.

Robotics Division: Is responsible for products for automating production processes. This division is also responsible for 30 KUKA colleges that customers attend technical training.

China Division: This division is comprised of all the business activities of the company (system, robotics, Swisslog, and Swisslog Healthcare). Its products are produced at the Shanghai or Shunde location. 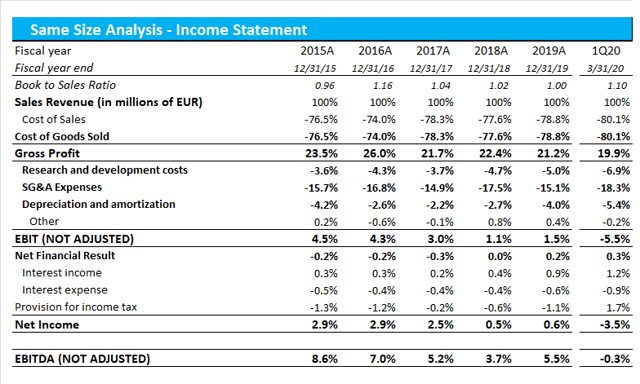 The company’s average gross profit was less than 22% during the 2017 to 2019 period. In 1Q20, their gross margin fell below 20%, causing me to question what the cause behind this is? After reading through the financials, I came to the following conclusions about why their gross margin fell. Material costs as a percent of sales decreased from 53.1% to 50.9%, which would have increased Kuka’s gross margin if it wasn’t for the increase in personnel costs, depreciation, other expenses, as seen in Figure 3.

Figure 3 – Breakdown of Cost of Sales

The company’s R&D costs as a percent of sales also increased over the past years. Personnel expenses are almost 90% of the R&D costs, and the rest is material costs and depreciation. R&D expenses are essential for companies in the robotics industry and, in my opinion, should be the last expense a company adjusts.

SG&A expenses as a percent of sales showed signs of improvement in 2019, maybe as a result of their reorganization. Then, in 1Q20, the company’s SG&A as a percent of sales increased by 200 bps. It is hard to tell why this occurred and if it is permanent or the result of layoff expenses. Only in 2Q20 will more light on this subject be shown.

I am not yet convinced that Kuka would be an excellent long-term investment. The company, in my opinion, does not seem to be agile enough. This is probably due to high fixed costs, which is why I believe expenses as a percent of revenue continue to increase. I am currently neutral on KUKAF because I am looking for a company that can outperform the industry.