Krugman Should Really Stick to Geography 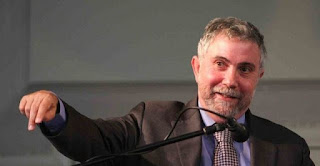 Few are aware but Paul Krugman was essentially awarded his Nobel Prize for economic geography. His thinking was not exactly about the structure of society. He can not be exactly described as Hayekian in his thought.

From the Nobel committee:

He should have stuck with that, though he probably peaked when thinking about Mount Everest and it has all been downhill from there.

The latest, in Krugman’s series of economic absurd commentaries, comes to me via his private letter.

Right out of the gate he writes as though half of what he should be considering has never entered his mind.

There’s no good reason to believe that the current budget deficit is doing significant harm.

What did do a lot of harm was the deficit hysteria that dominated establishment discourse the last time we had a deficit this big, which also happened to be a period during which the economy was deeply depressed, and the stimulus from deficit spending was actually a good thing. It should have been obvious that obsessing about deficits in 2012 was a huge mistake. What’s relatively new — and something I couldn’t get into at length in the column — is the realization that government debt isn’t much of a problem even at full employment.

It’s as if he is writing from the top of Kangchenjunga and is air deprived.

The idea that government deficits and debt don’t matter is absurd.

Every dollar borrowed by the government is a dollar that can’t enter the private sector, possibly to fund capital purchases. Every penny lost to the funding of capital is another step in the direction of a shrinking general standard of living.

Unless of course, you think government borrowing to pay for bombs that are used on tiny countries, or you think money funneled to the government created poor, is a sound use of money.