KORU Is Getting Tailwind From A Shift Away From IV And The Pandemic (NASDAQ:KRMD)

Our investment thesis for KORU Medical Systems (NASDAQ:KRMD) is really quite simple, the company is benefiting from a secular shift away from IV treatment towards subcu (home infusion) treatments for which the company has developed a number of solutions that patients can administer themselves in the safety of their home.

Subcu treatment doesn’t tax the medical system nearly as much as IV treatment, so insurers are on board as well, and in the present pandemic times, when medical systems are heavily burdened and patients scared to go, these advantages are compounded.

The number of medicines which can be administered via subcu rather than IV is expected to increase, giving the company the characteristic of a compounder.

We introduced KORU Medical Systems on January 27 of this year, and the stock has been up quite a bit since (+69%, to be precise). Obviously, things are going well.

Indeed, the company has done well, revenue keeps on rising and operationally, the situation is also improving with the company once again being GAAP profitable in Q1:

In our previous article, we introduced the main products. For easy reference, we add these here:

The company produces easy to use infusion systems, including the Freedom Integrated Infusion System like the FREEDOM60 and FreedomEdge Syringe Drivers, Precision Flow Rate Tubing, and HIgH-Flo Subcutaneous Safety Needle Sets. The company also offer a line of rescue and ambulatory equipment known as the RES-Q-VAC Hand-Held Medical Suction.

We also discussed the addressable market, which is the global IG or immunoglobulin market with IG therapies treating neurological conditions, blood disorders, and immune disorders.

There are two categories of indications where KORU’s products are used, PIDD (Primary Immunodeficiency Diseases) and CIDP (Chronic Inflammatory Demyelinating Polyneuropathy). Both of these categories have numerous diseases; in the case of PIDD, hundreds with a combined addressable market of $300M in the US alone.

There is a slide we previously used from the LD Micro Conference Presentation which gives a nice overview of the SC (subcutaneous or “subcu”) treatments available or in development or possible development, so we reproduce that here as well. : 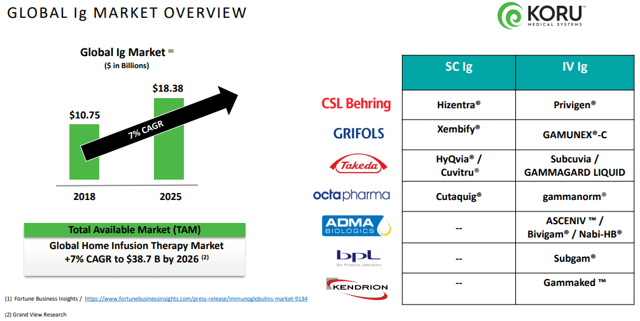 Drugs are usually administered through IV, but this is the market that KORU is setting out to change with its Freedom systems. Not all 11 existing IV IG drugs are equally suitable for SC treatment, but a subset of these in the slide above contains the 7 that are suitable for SC use.

The Q1 earnings deck gave a nice overview of their strategic approach: 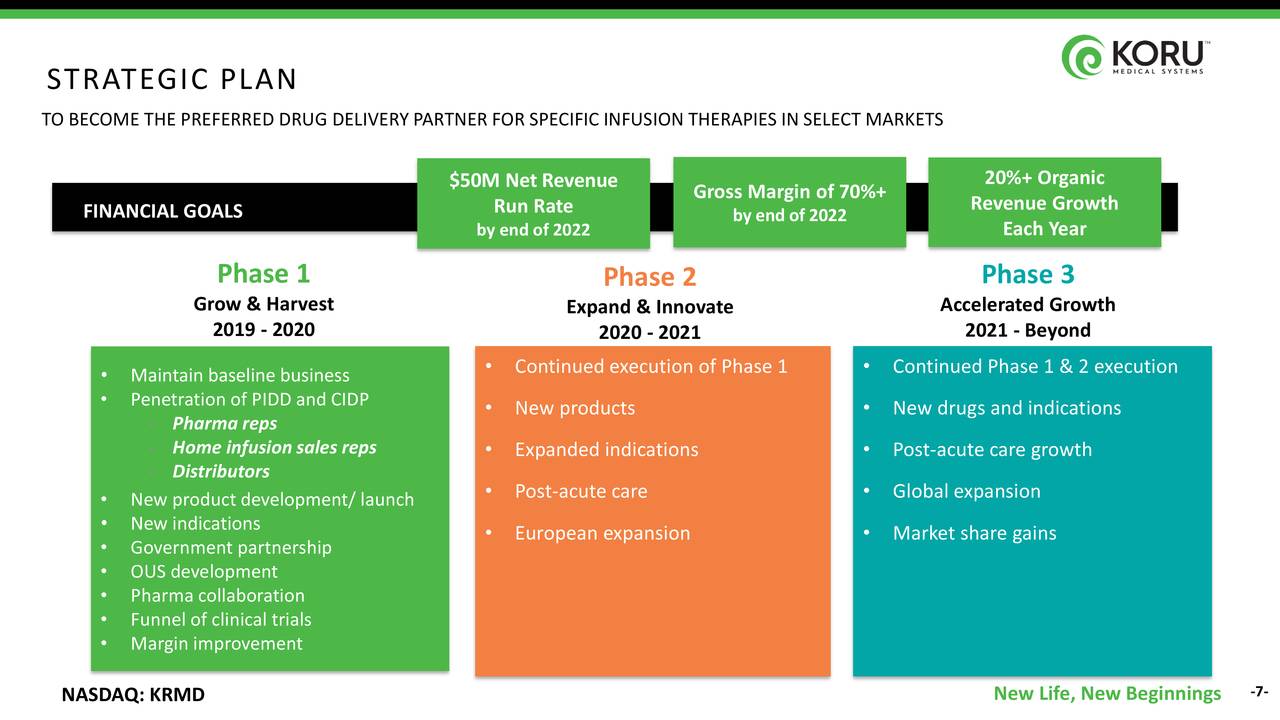 The main drivers for the growth are:

A main driver of sales for now is Hizentra (a CIPD treatment), but at the end of 2019, Grifols launched Xembify, and the uptake is actually faster than that of Hizentra and Grifols is a market leader in the IVIG market, so for them to shift to SC is a pretty big deal.

The company’s Freedom system is involved in multiple clinical trials for additional drugs using SC. The most furthest advance is a drug in the area of hematology which has just completed a Phase III trial.

Management expects commercialization of that drug in the next 12 months. Some of these other trials could experience some delays due to the COVID-19 pandemic. Speaking of which…

The company is considered essential, and it’s not facing supply chain disruptions, but there are some other issues to consider, from the earnings deck: 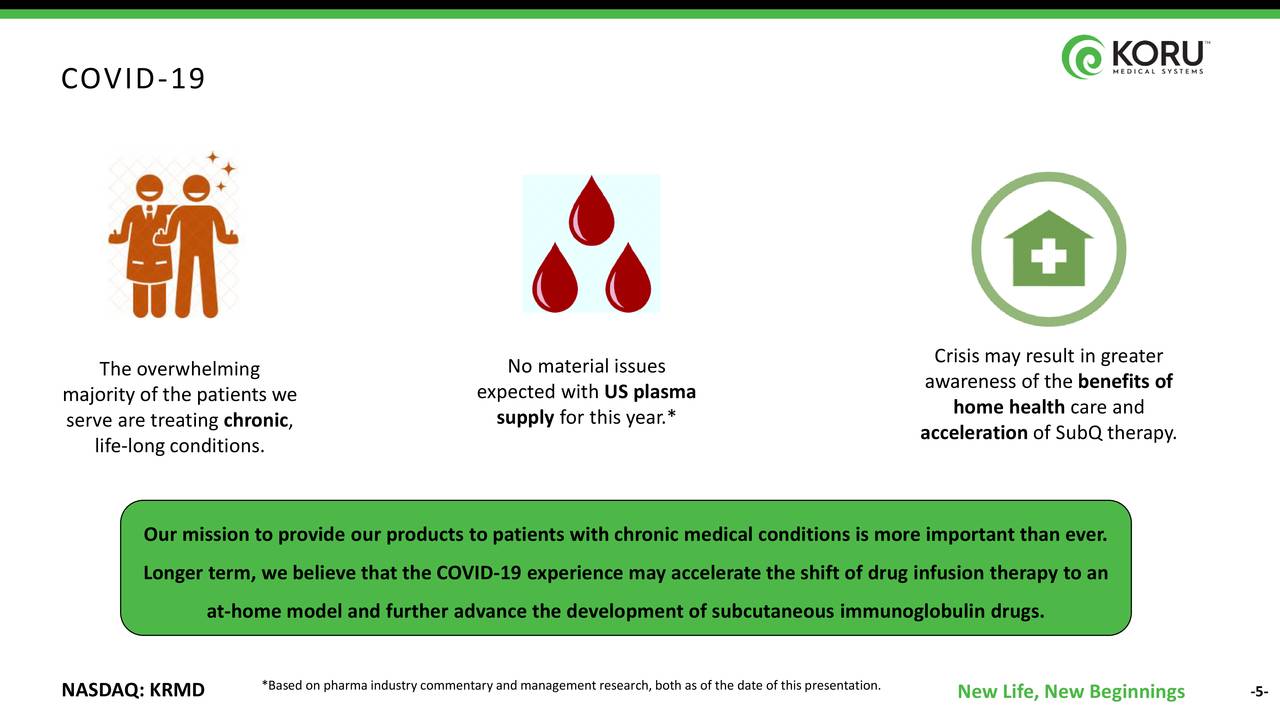 In fact, the importance of the ability that the company’s Freedom systems afford patients treatment in their own home has only increased, which is why the company has experienced higher demand for their products since the pandemic began from late March onward.

They also sell most of their product through distributors which shields them from depending on in-person sales calls to drive revenue. Their products are used by people suffering from chronic conditions, it’s not a discretionary item on which they can save money.

On the other hand, new PIDD and CIDP diagnoses can be delayed, although (Q1CC) “it can take more than 10 years in multiple physician visits to secure these diagnoses in the first place. So we do not currently view this as a long-term impediment to industry growth.”

And a new needle set (their high flow Super 26) which they were supposed to have launched already has been postponed to later this year as a result of the pandemic, but the financial impact of this isn’t material. 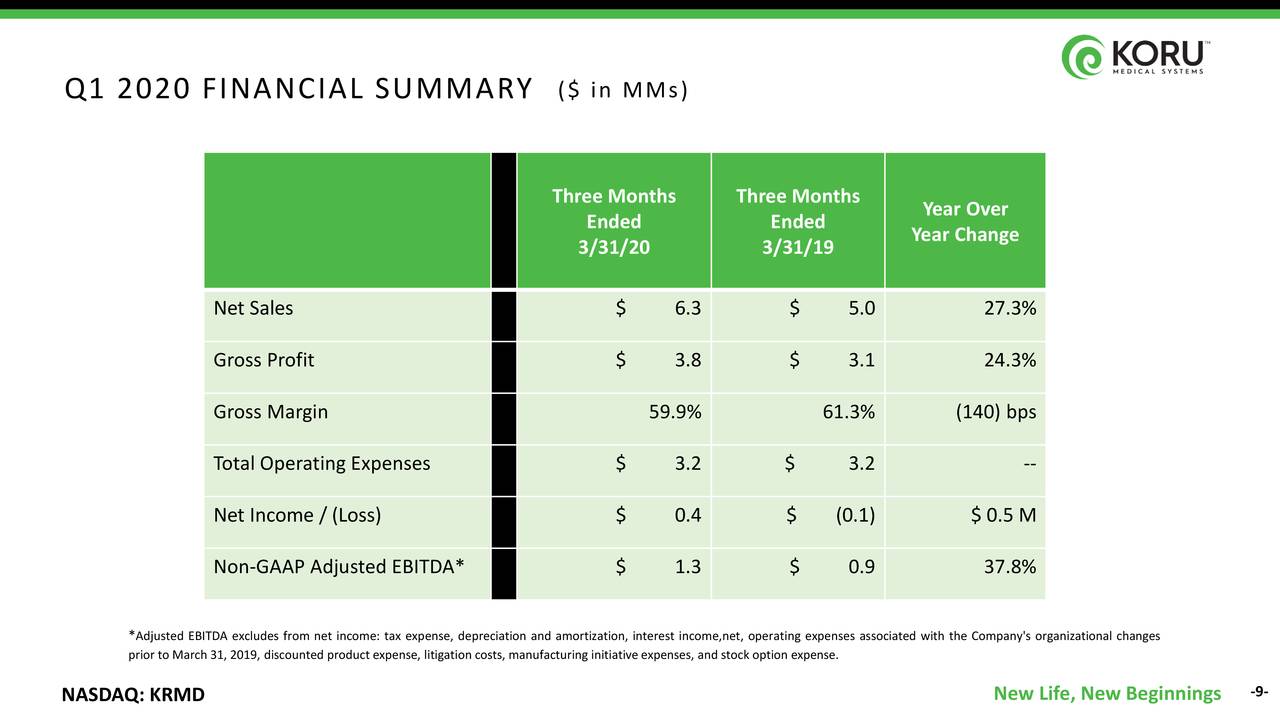 Gross margin declined a couple of points as the result of starting up a second production line and a $100K non-cash obsolescence reservation. The company has hired a consultant to improve manufacturing efficiency to move margins towards their longer-term goal of 70%+.

Cash has turned positive again, and the company has $7.4M in cash and equivalents, and no debt. The net increase in cash was entirely due to the company drawing down $1.5M of its credit line, and on April 14, they signed a new $3.5M line and draw that in full as well as a safeguard against the pandemic.

Management obviously doesn’t like to be unprepared because they filed for a mixed $100M shelf on May 14 (2020). There are 44.2M fully diluted shares, dilution has been very moderate to date:

We see little room for valuation multiple expansion, but we said that in our January article also. Obviously, the market had a different opinion. Analysts expect an EPS of $0.09 this year rising to $0.16 in 2021.

While the shares are expensive, the company does have rather unique capabilities in enabling SC treatments for some diseases that had to administered through IV in a clinic.

The shift in direction from market leader in IV Grifols, reinforcing a trend, and the increased importance of at home treatment brought forward by the pandemic have given the shares another lift.

Business wise, the sky seems to be pretty clear as adoption of existing SC administered drugs increases and new ones arrive on the horizon. Financially, there is also room for improvement through economies of scale, operational leverage, and improving production efficiencies.

While we are bullish on the shares, given the fairly stretched valuation multiples, we don’t see a whole lot of immediate upside.