Kodak, the fallen giant of the photography industry, is pivoting to make the ingredients used in generic drugs to fight coronavirus.

The Trump administration on Tuesday said it was extending a $765m loan to Kodak, as the US government tries to expand domestic manufacturing across medical supply chains to reduce dependence on foreign countries, particularly China.

“It could be Covid applications, but not only. It is a long term play to ensure that America has the starting materials it needs to supply its people,” he told the Financial Times.

Mr Continenza said the loan would be paid back in full. “This ain’t charity, this is a business and we’re here to move at Trump time. We’ve got to move fast,” he said.

Peter Navarro, the president’s trade advisor, said in a statement: “If we have learned anything from the global pandemic, it is that Americans are dangerously dependent on foreign supply chains for their essential medicines.”

Shares in Kodak, which failed to adapt to the rise of digital photography and filed for bankruptcy protection in 2012, soared to their highest level in about two and a half years on the news, tripling to close at more than $7.94 a share.

The loan will be granted by the US International Development Finance Corporation (DFC) under the Defense Production Act, which Donald Trump has invoked to purchase N95 masks and speed up the making of ventilators.

The president issued an executive order in May authorising the DFC to make loans or purchases that would strengthen US manufacturing capabilities in the fight against Covid-19. The DFC said the Kodak project would mark the first use of that authority.

The Trump administration has pushed to repatriate production of medical supplies and pharmaceuticals as concerns rise over the dependence on China and other foreign manufacturers, with the Food and Drug Administration estimating about 80 per cent of active pharmaceutical ingredients are made outside the country.

Many generic drugs were in short supply before the pandemic but during the height of the crisis many hospitals struggled to obtain drugs including sedatives and anaesthetics, vital for patients on ventilators. 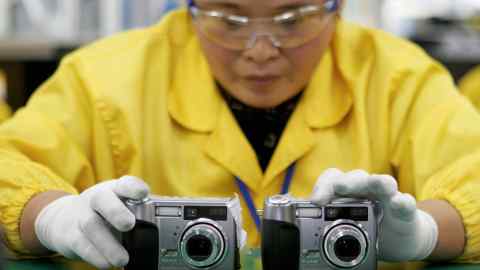 There have also been spikes in demand for hydroxychloroquine, an antimalarial treatment touted by Mr Trump but which studies now show is not effective for Covid-19, as well as for dexamethasone, a generic steroid that an Oxford study found was effective for patients with severe Covid-19.

Mr Continenza said the company was “proud” to be a part of strengthening America’s self-sufficiency. “By leveraging our vast infrastructure, deep expertise in chemicals manufacturing, and heritage of innovation and quality, Kodak will play a critical role in the return of a reliable American pharmaceutical supply chain,” he added.

The DFC said its $765m loan would accelerate the launch of Kodak Pharmaceuticals by supporting the cost of repurposing and expanding existing Kodak facilities in Rochester, New York, and St Paul, Minnesota.

Those facilities are expected to build capacity to produce up to 25 per cent of the active pharmaceutical ingredients used in generic pills, but not complex biologics. The project will support 360 direct jobs.

This is the not the first new change of tack for Kodak, which said in 2018 it would launch a blockchain business to secure the ownership rights of photographers.