Kinder Morgan (KMI), as a major pipeline and midstream services firm, is one of the most interesting companies on the market. Because of the nature of the industry and the history of the company, investors expect to see reliable, consistent cash flows. Sadly, even a high-quality enterprise like Kinder Morgan is not immune to the recent economic turmoil created as a result of the COVID-19 pandemic. The end result for the company and its shareholders is a necessary and unfortunate recalibration of expectations, but even with these changes, the picture for the company long-term is incredibly attractive.

Kinder Morgan, as a pipeline and midstream services firm, is a stable company, but even it has its limits. The sudden and violent drop in global oil demand has hurt it. As an example, we need only look at the firm’s financial results for the first quarter of its 2020 fiscal year. According to management, revenue during the quarter totaled $3.11 billion. This represents a decline of 9.4% over the $3.43 billion seen the same quarter last year. The company generated a net loss of $306 million compared to a gain a year earlier of $556 million, but on an adjusted basis earnings per share of $0.24 was nearly the same as last year’s $0.25.

Even though natural gas volumes were up 8%, the company suffered from some products like gasoline seeing reduced volumes. Another problem was low pricing. Kinder Morgan is not completely immune to the price at which fossil fuels trade at. As a result of all of this, the company ended up seeing its DCF (distributable cash flow) drop from $1.37 billion in last year’s first quarter to $1.26 billion now. On a per-share basis, this comes out to a decline from $0.60 to $0.55. Adjusted EBITDA was also down, having fallen from $1.95 billion to $1.85 billion.

Given that the greatest impact of the COVID-19 pandemic so far has occurred toward the end of the first quarter and presently now in the second quarter, investors should be prepared for the environment to worsen for most firms. To prepare, Kinder Morgan is taking some drastic steps. The first of these relates to its dividend. Despite the fact that the firm will have excess cash after their first quarter’s distribution of $664 million, they do not wish to underestimate the severity of the current downturn. Because of this, instead of paying out $1.25 per share on an annualized basis, management has decided to reduce this to $1.05, or $0.2625 per quarter. This is still up from last year, but only to the tune of 5%. Management said that if normal economic activity comes back, they will revisit this decision in January of next year for the firm’s fourth quarter payout.

Beyond just reducing the size of the increase to its distribution, Kinder Morgan is taking some other big measures. They claim that new planned expense and maintenance capex reductions will save shareholders more than $100 million for the year. In addition, the company intends to cut their expansion capex by $700 million from $2.4 billion to $1.7 billion. Naturally, this will negatively-affect the company’s growth prospects some, but investors shouldn’t be buying Kinder Morgan for its growth. They should buy because of its high distributions and low share price.

Originally, the company planned for its budget this year to generate $5.1 billion, or $2.24 per share, in the form of DCF (distributable cash flow), and $7.6 billion in the form of EBITDA. Recent changes and management’s own assumptions about the near future have resulted in the company forecasting that DCF will come in about 10% lower compared to expectations, while EBITDA will come in about 8% lower. This implies DCF of $4.6 billion per year, or $2.02 per share, and EBITDA of $7 billion. Even with this change, DCF minus expansion-related capex will be about $200 million higher this year versus prior expectations.

Even though Kinder Morgan is going to be hit some by this, not everything is bad. While the firm’s net leverage ratio for 2020 will likely end up at about 4.6 versus the prior expectation of 4.5, the company is still buying back stock. In March alone, management bought back $50 million worth of stock for about $13.94 per unit. That translates to 3.6 million shares. In addition to this, even taking into consideration how much lower DCF per unit will come in at, shares of the company, at $14.62 as I type this, are trading on the cheap. The current market cap / DCF ratio today works out to 7.2. This is not the territory of deep value, but it’s not too far off. In addition, the yield is an attractive 7.2% and if investors buy now and the distribution gets increased to $1.25 next year, this will move up to 8.5% on an annualized basis. 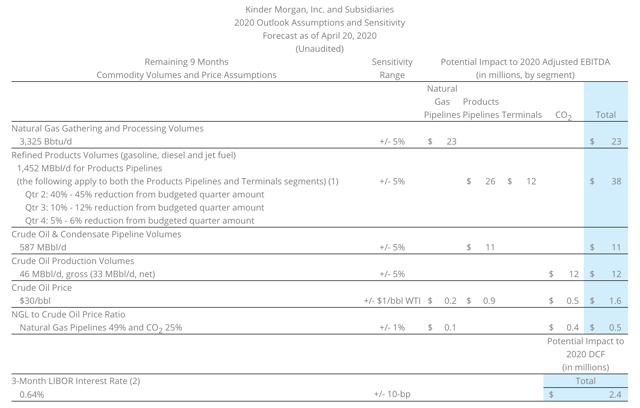 One thing I really appreciate about Kinder Morgan is how transparent management is. In the image above, you can see a range of scenarios and what those scenarios would mean for the company’s EBITDA and its DCF. Their current model assumes oil that’s priced at $30 per barrel, but even if oil goes down to $10 and stays there (which is very unlikely), the impact would only be $1.6 million for the year to EBITDA per $1 per barrel, or $32 million on the whole. Another big impact could come from reduced volumes that the company deals with. A 5% change to management’s expectations could impact EBITDA by $38 million annually.

Right now, the picture facing Kinder Morgan may not look great in the eyes of investors and prospective investors, but when you really boil the figures down, things don’t look bad at all. The business is still a cash cow and so long as the energy environment doesn’t worsen a great deal, the business will continue to thrive. It could very well pay out more per share than it plans to at the moment, but it’s nice to see management make the wise decision to play things from a prudent angle. This should make investors even more optimistic regarding management’s ability to steer the ship.

Crude Value Insights offers you an investing service and community focused on oil and natural gas. We focus on cash flow and the companies that generate it, leading to value and growth prospects with real potential.

Subscribers get to use a 50+ stock model account, in-depth cash flow analyses of E&P firms, and live chat discussion of the sector.

Sign up today for your two-week free trial and get a new lease on oil & gas!