Over the past six months, beverage company Keurig Dr Pepper (KDP) has seen its shares rise by 7.3%. While that’s a nice gain, it trails the increase of both beverage giants the name is competing with. The smallest name of the three also trades at a discount to its peers, despite a decent growth profile for the next two years. Today, I’ll explain how I think the name can regain some favor with investors, and it starts by raising the dividend.

Keurig Dr Pepper shares currently pay a quarterly dividend of $0.15 per share, a rate we’ve seen for more than two years now. The company is not in the S&P 500 right now, although it could be added at any time. I bring up the popular index because the current annual yield of 1.99% wouldn’t even put the name in the top 200 of those 500 names in terms of yield. Beverage giants Coca-Cola (KO) and PepsiCo (PEP) have significantly higher annual yields as the chart below shows. 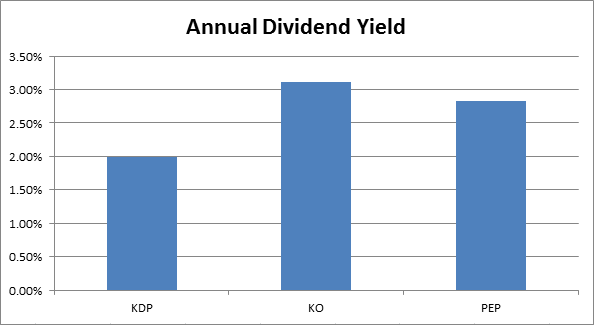 The one headwind to dividend growth that’s most evident is the balance sheet. As the company’s latest 10-Q filing shows, there was less than $200 million in cash at the end of September against almost $14 billion in debt. The company has brought that debt pile down by over $530 million this year, and after a $1.75 billion maturity in May 2021, there isn’t a lot of debt due right away. I think that borrowing can easily be refinanced at a decent coupon in this low interest rate environment.

However, at the moment, it’s not really a matter of poor cash flow that’s limiting the dividend. Last year, the company produced free cash flow of over $2.14 billion, and cash dividend payments were just $844 million. That’s a payout ratio that didn’t even hit 40%. So far this year, free cash flow is down a few hundred million through the first nine months as compared to the prior year. Even if we project out the last quarter as a similar story, the payout ratio only rises to about 48%. That leaves plenty of room for the dividend to grow as well as for further debt reduction over time.

Let’s next look at some financial comparisons in the table below, showing current street estimates for the next two years along with their associated valuations on a P/E basis. The thing that stands out the most is valuation. Keurig shares trade at a significant discount to the two larger beverage giants. While expected revenue growth does come in last of the three, earnings per share growth is the best of the three over the two-year period.

I believe there are two ways for the valuation to get closer to that of its peers. The first is to be added to the S&P 500, which should spark some nice buying, but that’s not something the company can really control right now. The second is increasing that dividend a bit, which could be done right away. If Keurig shares averaged just a 10% discount to the P/E average of the other two names and we applied current 2022 earnings estimates, Keurig shares would be valued at just under $35, or about 16% upside from current levels.

So, what could a potential dividend raise look like? Well, I’ve detailed that in the table below. At this point, almost any raise would give the annual yield a 2 handle, which may be a key threshold for some investors. My personal opinion for a raise would be in yellow, with a 20% raise to $0.18 per share being the best idea. This would result in annual dividend payments of a little less than $1.02 billion, which is more than covered by current free cash flow with plenty of room to spare. 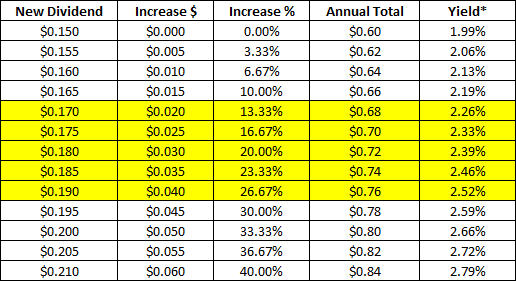 *As of Thursday’s close.

With shares of Keurig Dr Pepper trailing its major rivals in the past six months, I think a nice dividend increase could help unlock some value. The name is poised for decent revenue and earnings growth moving forward, yet it trades at a significant discount to both Coca-Cola and PepsiCo. Part of that in my opinion has to do with a much lower annual dividend yield, and current free cash flow generation certainly allows for a larger payout. Throw in S&P 500 index inclusion over time as well, and I think this name has some decent upside possible.