Dorcas Mazune was walking home through Kawangware, the low-income neighbourhood in Nairobi where she works, when her phone pinged.

It was a notification about a $20 loan she had taken out last year from Branch International, a Silicon Valley-based personal credit start-up, when she was short for her rent. “Dorcas, we will report you to the CRB tomorrow unless you pay Ksh 1,103 . . . by midnight TODAY,” it said, in a reference to Kenya’s Credit Reference Bureau.

Later her boyfriend said he received a surprise call from a debt collection agent who said he should urge his girlfriend to pay back the money. Ms Mazune, 21, who earns about $100 a month, had not told Branch about her boyfriend or given anyone his number. 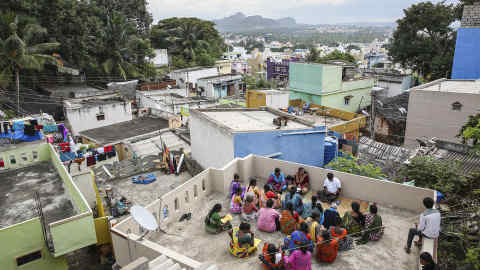 “That was really weird,” Ms Mazune said, sitting in a red swivel chair at the barbershop where she works. “I paid it and then deleted the app.”

Four other borrowers in the Kenyan capital also said that collection agents had pursued them to recover Branch loans, either by informing their friends and family using contact information scraped from their phone or, in two cases, by threatening to tell their employers.

These tactics, known as debt-shaming, have become highly controversial in Kenya, where a flood of small loans, once championed as a way to lift people out of poverty and enable hard-working borrowers to fund businesses or cover unexpected costs, has also created a market for unscrupulous debt collection. Kenya’s banking regulator says the practice has already led to at least one suicide.

“They said: ‘We will come, we will come and get you, no matter how far you are and how hidden you think you are’,” said Victor Anzel, 29, a mechanical engineer, who said he was chased by Skywave, a Kenyan debt collection agency, when he was eight weeks late on repayment of a $200 Branch loan. “We will come and auction your stuff, we will track you through your boss, we have your details,” the Skywave agents said, according to Mr Anzel.

He shared several intimidating text messages with the Financial Times, including one in which Skywave warned him not to “push” the agency to contact his employer. “That’s when I thought this can’t be the right way to collect debt,” he said.

Branch — which says its lending in emerging markets is intended to “spur human potential” — said it did not engage in “any aggressive practices to seek repayment of loans” and that it had granted extensions on loans during the coronavirus pandemic. “We don’t ever shame, share contacts or add calendar reminders for loan repayment purposes,” the company said.

It confirmed it used debt collection agents to chase unpaid loans but said this was common practice in the lending industry, adding that it vets its agents carefully and monitors their activity weekly. Skywave did not respond to emailed questions regarding the allegations. When contacted by telephone a Skywave representative declined to comment.

But interviews with former employees at Branch and two collection agencies suggested that debt shaming tactics like those described by Ms Mazune and Mr Anzel were often used by collection agents, who are generally paid only with a percentage of the loans they recoup.

Branch is one of more than 100 digital lending platforms operating in Kenya. The sector, an evolution of the microfinance industry often championed as a “silver bullet” to end poverty, has ballooned in the past five years, fuelled by the country’s vibrant technology start-up scene — worth an estimated $1bn — and the penetration of the Kenyan mobile money service, Mpesa, used by more than 25m citizens — almost half the population.

Since 2016, Branch said it had processed over 15m loans to 2m Kenyans. Its app, which offers loans of between $2 to $700 at annual interest rates of between 22 per cent and 240 per cent, analyses a borrower’s smartphone to judge creditworthiness.

With offices in India, Kenya, Mexico, Nigeria and Tanzania, Branch is one of the world’s leading digital microlenders. The company has raised $250m in investment since it was founded in 2015 from blue-chip venture capital firms such as Andreessen Horowitz, as well as from Visa and the World Bank’s international finance corporation, which promotes “responsible debt collection in emerging markets” and stipulates that lenders should not outsource unethical practices to other debt collectors.

Some of Branch’s debt collectors are also used by other lenders such as Tala, another Silicon-Valley funded app, and Opesa and Okash, owned by the Norway-headquartered software company Opera. In June, Branch, Tala and more than dozen other digital lenders in Kenya issued a public statement singling out Opesa and Okash for allegedly using customers’ contact lists to shame borrowers into making repayments, and sought to distance themselves from the practice. Opesa and Okash both denied the allegations.

Branch’s borrowers give consent for the Branch app to access their contact list, call and SMS logs, Facebook friends, location and photo library, among other things. In Kenya, as the app works by transferring credit into a borrower’s M-Pesa account, it can also see the user’s balance and how they have been using it.

Collection is challenging, so sometimes, because you really want the commission, you have to figure out a way to get a customer to pay

Branch denies using that data to then chase a borrower’s friends, family or employer, if that borrower fails to repay the loan. “Branch only shares basic information for debt collection purposes: customer name, phone number and loan information,” it said.

But a former employee at the collection agency Nimble Group Kenya said it was still possible for a collection agent working on a Branch loan to track down family members, since borrowers are often registered on several apps, enabling agents to retrieve contact information from lenders that did share borrowers’ address books.

“If I have a phone number that has borrowed [from] Branch, Tala and Opesa, the [debt agency’s] system has three accounts linked to the same phone or ID number,” the former Nimble employee said, asking not be identified. “Collection is challenging, so sometimes, because you really want the commission, you have to figure out a way to get a customer to pay.”

One Branch borrower who requested to remain anonymous said he was contacted by Nimble regarding an outstanding Branch loan of $180 in May 2019. In a text message, seen by the FT, Nimble threatened to begin “skip trace and field recovery” — an industry term meaning to locate someone’s whereabouts. The collection agents went on to contact his mother, even though the borrower said he had never provided her telephone number to Branch.

According to the former Nimble employee, Branch knew that some of the Nimble collection agents were using such methods, since it introduced a system in December 2018 to punish Nimble for over-aggressive collection practices by lowering its fee. Nimble did not respond to a request to comment on the allegations.

Branch was also aware of similar collection practices at least one other of its collection agencies. Branch held a meeting with that agency, Skywave, in 2017, following customer complaints and told the company to cease the aggressive tactics, according to a former Branch employee who said they attended the meeting.

Branch declined to comment on the specific allegations relating to Skywave and Nimble, saying that it did not publicly discuss business matters involving third parties. “We take serious measures including termination or suspension if agencies participating in debt collection practices are not aligned with our values,” Branch said.

In April, with public outrage building over the conduct of digital lenders, the Central Bank of Kenya ended the access of app-only lenders like Branch to the country’s Credit Reference Bureau database. A new law under review in the Kenyan parliament would also require digital lenders to seek approval from the central bank for changes to interest rates or to launch new products.

“People have suffered,” the central bank governor, Patrick Njoroge, told the FT. “People who have gotten a phone call from their local priest deep in their rural areas asking them why they haven’t paid . . . It’s never too soon to do the right thing and that’s what we intend to do.”