Kenosha thrust into spotlight in debate over police violence

When riots broke out last month on 22nd Avenue in Kenosha, after a black man was shot seven times by a police officer in the Wisconsin city, Kammi Hively could see the smoke rising from her house less than a mile away.

A day later, a few blocks away from Ms Hively’s home, Kyle Rittenhouse, a resident of the neighbouring US state of Illinois and a Donald Trump supporter, allegedly shot and killed two protesters.

“I never thought this would happen,” she said, adding that the violent unrest in her home town has upended her assumption that these types of things happen in cities far larger than Kenosha. She was so unnerved by the chaos that she briefly sent her three children away to stay with friends and family.

The events of the past two weeks have thrust Kenosha — a city of 100,000 on Lake Michigan in southeastern Wisconsin — into the national spotlight and turned it into a focal point in the rancorous debate over race relations and police violence in the US.

Earlier this week Mr Trump visited the city, which is about an hour’s drive from Chicago along the Interstate 94 highway. The US president made the trip despite pleas from some local politicians, who urged him to stay away for fear that his trip would stoke tensions further.

On Thursday his Democratic rival Joe Biden will also visit Kenosha, where he is expected to meet the family of Jacob Blake Jr, the man who was shot and partly paralysed in the police shooting.

Even if the city had not become a flashpoint in America’s reckoning with police violence against black people, it was always the kind of place where the presidential election in November would be lost or won.

Kenosha County is among the most tightly contested counties in the fiercely competitive swing state of Wisconsin: in 2016, Mr Trump won here by 238 votes and carried the state with 47.2 per cent of the vote compared to Hillary Clinton’s 46.5 per cent.

Although the city tilts heavily Democrat, the surrounding suburbs and rural areas are more Republican. Lori Hawkins, the Democratic party chair in Kenosha county, said “the road to the White House goes through Wisconsin”.

Kenosha was a manufacturing centre during much of the 20th century. Until the 1970s, the five largest employers — including the mattress manufacturer Simmons and carmaker American Motors — employed 85 per cent of the city’s residents. American Motors was sold to Chrysler, which shut its main plant in 1988 and its engine plant in 2010.

Today the county is largely a “bedroom community”; 45 per cent of residents commute outside of Kenosha County for work, according to 2014 US Census data. For the most part, those who work inside the county are employed in education or healthcare, which pay lower average wages than manufacturing. Amazon is the largest employer, with 3,000 workers.

If you want to tear up something, tear up the police station

The county’s population breaks down as 86 per cent white and 7 per cent black. And as with most parts of America, black residents are more likely to be poor: about a third live below the poverty line, compared with 11 per cent of white residents.

Kenosha, like nearby Milwaukee and Racine, has a higher proportion of black residents than other parts of Wisconsin, and spends a greater share of its budget on policing compared with the state’s seven other largest cities, according to the non-profit news outlet Injustice Watch.

The Kenosha Police Department — which has come under intense scrutiny for both the shooting of Mr Blake and the circumstances surrounding the Rittenhouse shooting — has always been a problem, according to Ms Hively.

A little more than a decade ago, Ms Hively, who is white, used to manage a Burger King, and would drive her employees home when their shifts ended in the early hours of the morning. She said she was routinely stopped by police, “because I was a white woman driving black men”.

Her two daughters are biracial, and she hates that they must contend with racial injustice.

Initially, Ms Hively kept her children away from the first nights of febrile protest, but has since taken them to quieter demonstrations. She said one of her daughters became frightened when she saw armed law enforcement officers patrolling the county courthouse.

The shooting of Mr Blake has deeply affected the black community. “We’re getting tired,” said Michael Flowers, who described Kenosha as a “prejudiced town”.

Mr Flowers lives in the Uptown neighbourhood, where about six businesses were torched along with the 110-year-old lodge for the Danish Brotherhood fraternal organisation. The blazes consumed a music store, an employment office, a beauty supply shop and the Good Taste Ice Cream Shoppe. A hand-painted sign in front of Rodeo’s, a camera shop that also succumbed to the flames, read “Gone in a flash”. 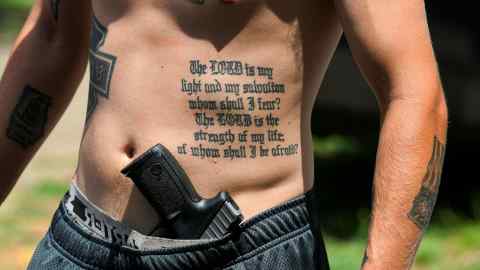 Mr Flowers did not think much of the rioters’ targets. “If you want to tear up something, tear up the police station,” he said, referring to the police station that was burnt in Minneapolis after a police officer killed George Floyd in May.

Now 22nd Avenue is mostly boarded up, with cheerful murals splashed across the plywood. Some of the paintings have hashtags, such as #KenoshaStrong or #UptownStrong.

Another quotes the Bible — “God is still here” — while nearby there is a memorial to one of the men allegedly killed by Mr Rittenhouse, Anthony Huber, “Huber the Hero”.

And just below the mural honouring Huber, someone has inscribed the words that have become the rallying cry of every protest march in America this summer: “No justice, no peace.”