Keep An Eye On The Soybean Crush Spread (NYSEARCA:SOYB)

The soybean futures market has been making lower highs and lower lows throughout 2020. Last week, the May futures contract rolled to July. On April 21, the price fell to $8.1850 per bushel, below the mid-March bottom on the July futures contract at $8.29.

We are at a time of the year where uncertainty over the 2020 crop tends to rise as the primary determinate of bean production is a function of the weather conditions across the fertile plains of the United States. The US is the world’s leading producer and exporter of soybeans. However, the deflationary spiral that has pushed many commodity prices lower has done the same to the oilseed futures.

Soybeans are another victim of the decline in energy prices. Since corn is the primary ingredient in ethanol in the US, the decline in gasoline and ethanol prices pushed the coarse grain to its lowest price since 2016 at just over $3 per bushel. As the price of corn declines, farmers are planting more soybeans, leading to more hedging and selling in the soybean futures market. Moreover, soybean meal is the primary ingredient in animal feed. The price carnage in cattle and hog futures has put additional pressure on the price of the oilseed. The Teucrium Soybean Fund (SOYB) follows the price of a portfolio of soybean futures higher and lower.

On March 31, in an article for Seeking Alpha, I suggested the at below $9 soybean offer value as bottlenecks at ports in South America could cause shortages. Meanwhile, the soybean crush spread has moved lower, which is a sign that demand for oilseed products is not supporting the price of soybean futures.

A processing spread compared the prices of a raw material that is the primary ingredient in the production of another product. Processing spreads often serve as a real-time indicator of demand for the raw material. In the world of soybeans, processors crush the oilseed into two products; soybean oil and soybean meal.

In a Japanese restaurant, edamame is boiled or steamed immature soybean, which accounts for a small percentage of demand for the oilseed. However, the bulk of soybean production each year winds up in consumer products that require the oil or the meal. Therefore, the crush spread is a barometer of demand for soybeans. When the crush moves higher, it often translates to higher soybean prices and vice versa.

The crush peaked in late March

The synthetic soybean crush spread reflects the economics of crushing a bushel of soybeans into soybean meal and oil. 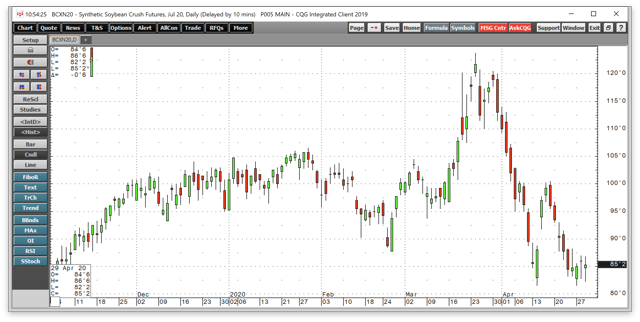 The chart of the July synthetic soybean crush spread highlights that the processing spread rose to a peak of $1.2375 per bushel on March 24. The continuous futures contract reached a high of $1.4275 on the same date. The spread moved higher as the demand for soybean meal caused the price of the product to rise.

The chart of July soybean meal futures shows that on March 25, the product of soybeans hit its peak at $326.50 per ton. Both the crush spread and the price of soybean meal moved lower since late March.

The price of soybean futures followed the crush spread like an obedient puppy since late March. 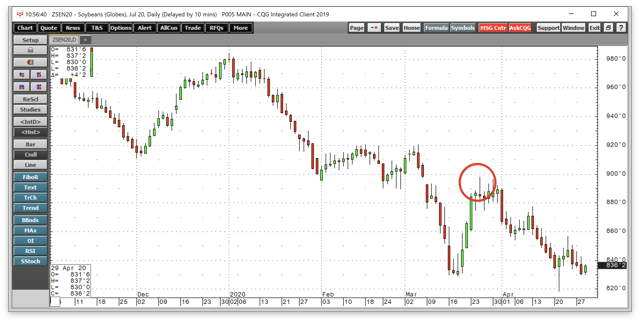 July soybean futures rose to $8.98 per bushel on March 25 and have been falling with the crush spread over the past weeks. The price of soybean meal hit a low of $286.50 on April 25, the same day that bean futures on the CBOT fell to the most recent low of $8.185 per bushel.

At times, the product prices and crush spread lead the soybean futures market, and others, the oilseed takes the leadership role. However, changes in the product prices or crush spreads can alert traders and investors to the potential for price volatility. There are often periods where the product or raw commodity makes the first move. I view the crush spread as a critical indicator of the overall price path of the raw oilseed futures.

Soybean meal is a primary ingredient in cattle and hog feed.

READ ALSO  Russia approves drug to treat Covid-19, hospitals to use in June 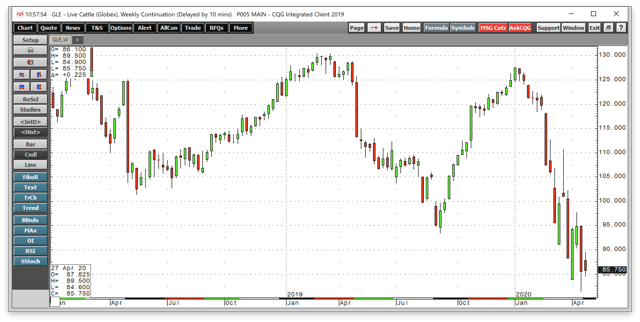 The weekly chart of live cattle futures shows a steady decline in the price of beef in 2020. Live cattle prices recently traded to the lowest level since 2009. 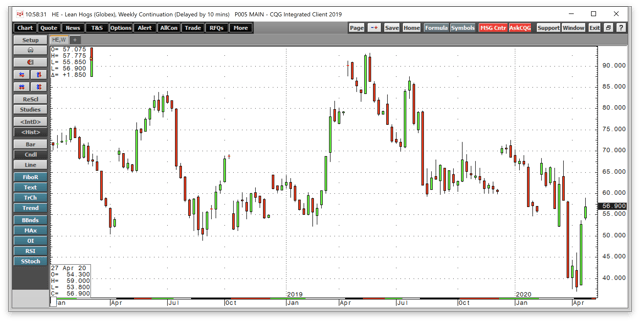 Lean hog futures also declined in 2020, sending the price of pork to its lowest level since 2002. The falling prices of animal proteins have weighed on the demand for soybean meal and soybeans.

Farmers have a choice when it comes to the crops they plant on acreage each year. Many agricultural producers choose between soybeans and corn. Since corn is the primary ingredient in ethanol production in the US, the price of corn is highly sensitive to gasoline and crude oil prices, which has tanked. The price of nearby June gasoline was trading at just below 78 cents per gallon wholesale on April 29 compared to around the $2 per gallon level last year at this time. 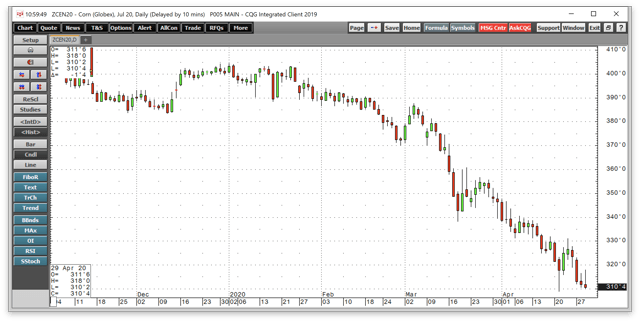 The price of corn for July delivery at $3.1050 per bushel on April 29 was close to the lowest level since 2016 and 2009. With corn at the lowest price in years, soybeans offer a better return for farmers.

Weakness in soybean meal and corn continues to weigh on soybean prices, but it will be the weather across the fertile plains of the US agricultural belt that determines if the 2020 crop is sufficient to meet worldwide demand later this year. Hot and dry conditions that threaten crop development could cause a sudden rally in the soybean futures market over the coming weeks and months. We are at a time of the year when uncertainty tends to lead to increased price volatility.

SOYB is the soybean ETF product

The most direct route for a risk position in the soybean market is via the futures and futures options on the CBOT division of the CME. The Teucrium Soybean Fund (SOYB) provides an alternative for market participants looking to take price risk in the oilseed without venturing into the futures arena. The fund summary and top holdings of SOYB include: 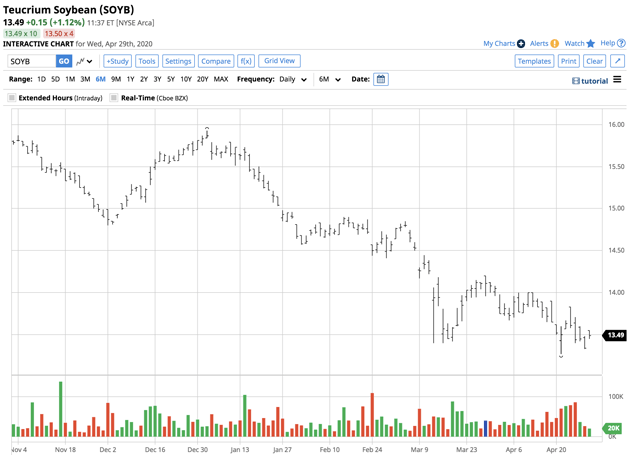 Keep an eye on the crush spread when considering a risk position in the soybean futures market. Over the coming weeks and months, changing weather forecasts could cause lots of price variance in the agricultural commodity. I continue to believe that the uncertainty of the crop in 2020 could cause a recovery in the soybean futures market, but so far the crush spread has not signaled that product prices support a rally in the raw oilseed.