In an interview with CNN’s State of the Union, Ms Harris said she believed Moscow would attempt to interfere in the 2020 presidential election in the same way that US intelligence agencies say it did in 2016.

“I am clear that Russia interfered in the election of president of the United States in 2016. I serve on the Senate Intelligence Committee,” Ms Harris told CNN.

“We have published detailed reports about exactly what we believe happened. And I do believe that there will be foreign interference in the 2020 election, and that Russia will be at the front of the line.”

Pressed to answer if Russian interference could cause the Democratic ticket to lose the election, Ms Harris responded: “Theoretically, of course, yes.”

I think that we have learnt since this pandemic started, but really before that, that there’s very little that we can trust that comes out of Donald Trump’s mouth

The Democratic vice-presidential nominee alleged Mr Trump’s frequent attacks on the electoral system as rigged and rife with fraud could also impede a fair result.

“We have a president who is trying to convince the American people not to believe in the integrity of our election system and compromise their belief that their vote will actually count. There will be many obstacles that people are intentionally placing in front of Americans’ ability to vote,” she said.

Trump administration officials say they are most worried about US election interference in 2020 on the part of China — which they say favours Mr Biden — not Russia.

“We know the Chinese have taken the most active role,” Robert O’Brien, Mr Trump’s national security adviser, told reporters on Friday. Mr O’Brien added that Beijing had “the most massive programme to influence the United States politically”, followed by Tehran and then Moscow.

William Barr, the attorney-general, has also asserted that China poses a bigger threat to US election security than Russia.

A report released by the director of the National Counterintelligence and Security Center in August found Russia was using “a range of measures” to hurt Democratic presidential nominee Joe Biden, while China was considering taking more active measures to hurt Mr Trump. The report did not publicly classify Beijing as the bigger threat.

Ms Harris also accused Mr Trump of trying to rush out a coronavirus vaccine ahead of the November election for political purposes. 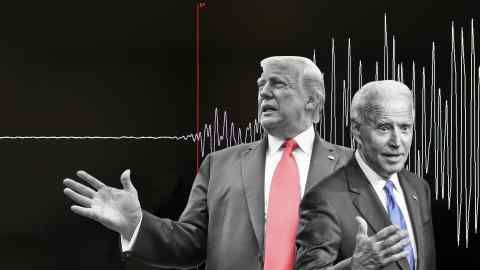 As the two presidential campaigns head into the final post-Labor Day election sprint, Mr Biden and Ms Harris have been attempting to turn the conversation back to Mr Trump’s handling of the coronavirus pandemic.

In her TV interview, Ms Harris accused Mr Trump of misleading the public about the virus and its effects.

“I think that we have learnt since this pandemic started, but really before that, that there’s very little that we can trust that comes out of Donald Trump’s mouth. From the beginning of this pandemic, he has called it a hoax. He has muzzled the public health experts. He has minimised the seriousness of it. He has created false expectations for the American people and American families,” Ms Harris said.

READ ALSO  The first presidential debate: five things to watch out for

She said she would not trust the president if he told the American people to take the vaccine.

“It would have to be a credible source of information that talks about the efficacy and the reliability of whatever he’s talking about. I will not take his word for it. He wants us to inject bleach,” she said, referring to Mr Trump’s comments earlier this spring at a press briefing when he suggested that injecting people with disinfectant might kill the virus.

Dr Scott Gottlieb, a former US Food and Drug Administration commissioner, on Sunday said the likelihood of a vaccine for widespread use this year was “extremely low”.

“I don’t think politics should get in the way at all. And I don’t think it will,” he said on CBS’ Face the Nation.

Dr Gottlieb warned the virus could spread aggressively in the autumn and winter in the US.

“Typically in the summer you see viruses spread that are spread through food, things that are ingested. In the wintertime, you see respiratory pathogens spread more aggressively, in part because people are indoors more.”