Sitting at a desk with an American flag behind him, Joe Biden removed his face mask and spoke into a laptop screen: “You ready to go to work?”

“Oh my God, I am so ready to go to work,” Kamala Harris’ voice answered back.

The video capturing the apparent moment that the Democratic presidential nominee asked the California senator to be his running mate underscored how campaigning has changed during the coronavirus pandemic.

But it also illustrated how, with less than three months to go until the US presidential election, Mr Biden and Ms Harris have a lot of work ahead in their quest to defeat Donald Trump.

While Mr Biden currently enjoys a comfortable lead in all big national opinion polls — and is trending ahead of the president in battleground states such as Florida, Michigan and Pennsylvania — Democrats acknowledge the former vice-president will face significant tests between now and November.

Those include three head-to-head televised primetime debates with Mr Trump and an advertising battle that will see both candidates spend hundreds of millions of dollars on ads in an effort to reach voters in the midst of the Covid-19 pandemic.

But on Wednesday, the party seemed to agree that Ms Harris — the first black woman and the first south Asian woman to be on a major party’s presidential ticket — was the right person to be by Mr Biden’s side.

“She has all of the tools you need. She is a barrier breaker, for sure, but she had been vetted in her run for president, she is reasonably well-known, she is practised as a national politician, and she’s extraordinarily smart and capable,” said Matt Bennett, co-founder of Third Way, the centrist Democratic think-tank.

He said Ms Harris’ “mainstream” political views gave her broad appeal throughout the Democratic party, which has in recent years seen ideological tussles between left-leaning progressives such as Alexandria Ocasio-Cortez and centrist establishment figures like Nancy Pelosi.

“I don’t think that she is easy to pigeonhole as a moderate or a super liberal,” Mr Bennett said. “I think the reason that people spanning the spectrum from me to Bernie Sanders have applauded this pick is because she does a pretty good job of remaining in the mainstream of Democratic thought.”

Ms Harris, who abandoned her own presidential primary bid last December, will join Mr Biden on Wednesday afternoon for a speech in the former vice-president’s hometown of Wilmington, Delaware, before co-hosting a virtual fundraiser.

Democrats say fundraising is one of the senator’s strengths, dating back to her early days in politics. Ms Harris was district attorney of San Francisco before being elected California’s attorney-general, a post she held until she was sworn into the US Senate in 2017.

While running for district attorney in 2003, she attended more than 100 house parties and sent flowers to each of her hosts, according to Jim Stearns, a political consultant who worked on the campaign.

Mr Trump himself, a former Democrat, donated $6,000 to her attorney-general bid in 2014, according to state records. His daughter, Ivanka Trump, also previously donated to Ms Harris.

The president on Tuesday described Ms Harris as “nasty” and the “meanest” and “most horrible” senator.

Ms Harris raised just shy of $40m for her presidential campaign, with more than half coming from “large” contributions of more than $200, according to the Center for Responsive Politics, which tracks money in US politics.

However, she suspended her campaign two months before the Iowa caucuses after failing to break through in a crowded field, saying she lacked the money to continue her bid.

At the time, many attributed her lack of success in the primary to her inability to articulate a clear policy vision compared to progressives like Bernie Sanders and Elizabeth Warren and more centrist candidates such as Mr Biden. In one instance, she raised her hand on a debate stage in support for Mr Sanders’ Medicare for All platform, which would effectively eliminate private health insurance in the US, before rolling that back the next day. 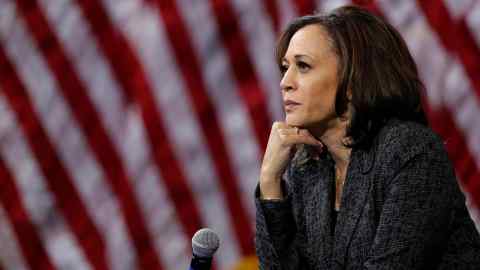 But Mr Bennett, who worked on both of Bill Clinton’s presidential campaigns, said Ms Harris’ ideology was a “secondary question” now that she was Mr Biden’s running mate.

READ ALSO  Business to Biden: prepare for a fight over tax and minimum wage

Jon Henes, a partner at law firm Kirkland & Ellis who was national finance chairman for Ms Harris’ presidential bid, said Mr Biden’s pick was warmly received by big business, including those wary of a Democratic ticket tilting too far to the left.

“The number of texts that have I received over the last 12 hours is more texts than I think I have received in the last 12 years, people asking how they can get involved, how they can give,” Mr Henes said. “You have got the titans of industry that know who she is and believe in her and Joe Biden to get the country back on track.”

Mr Bennett agreed. “What corporate America is looking for after three-and-a-half years of total chaos and unpredictably and bedlam at the top are steady hands,” he said. “She seems very steady.”