Kaixin Auto Holdings (KXIN) has been attracting significant investor interest lately and was even featured in Bloomberg a few days ago in an article named “China’s Kaixin Nears 1,000% Annual Gain on Electric Vehicle Rally”. It’s an obscure company that hasn’t published financial results for a while, so I was interested to see what the big fuss was about. After some digging, I don’t like the prospects of Kaixin one bit and I think the company could be worthless.

What you need to know is that Renren ventured into the used car sales business in 2017 and launched the Kaixin Auto brand in 2018. Kaixin Auto Holdings was born in 2019 when this operation was merged with a Cayman Islands-based special-purpose acquisition company (SPAC) named CM 7 Star Acquisition. Renren ended up owning 71.7% of the new company.

On its website, Kaixin Auto Holdings claims that it has a network of 14 dealerships and focuses on selling high-end cars under several renowned brands such as Audi, BMW Mercedes Benz, and Porsche.

Relations with partners seem rocky as the company announced in August 2020 that it initiated legal proceedings against non-controlling shareholders of three of its dealerships due to disputes over operating issues. These three dealerships accounted for the majority of its revenues in 2019, so this is a significant development.

On November 5, Kaixin announced that it inked an agreement for a merger with Haitaoche, which is a Chinese firm that owns an e-commerce platform for imported cars. Under the agreement, Haitaoche’s shareholders will get a 51% stake in Kaixin and Haitaoche will become a wholly-owned subsidiary. However, this merger is still in the term sheet phase, so it’s not a done deal.

There are very few details on the deal with Haitaoche and Kaixin’s financials aren’t better. The latest results of the latter are from Q4 2019 and they paint an ugly picture. Somehow, the company managed to lose $46.1 million in 2019 on sales of just $334.7 million. Even the gross margin of Kaixin is negative and motor vehicle distribution isn’t supposed to be such a loss-making endeavor.

Looking at the balance sheet, Kaixin had assets of $54.4 million and equity of just $2.5 million as of December. And this is before the COVID-19 pandemic hit. This is an excerpt from the company’s August news release about the legal proceedings:

COVID-19 pandemic has a material adverse impact on Kaixin’s used-car dealership business and the Company has experienced a significant loss of revenues.

Looking at Kaixin’s ownership structure, Renren held 79% as of May 2020 and Japanese conglomerate SoftBank Group (OTCPK:SFTBY) owns 38.2% of Renren as well as 42.6% of the votes. The remainder of the voting power at Renren is in the hands of its founder Joseph Chen and he also owns 32.5% of the shares.

Also, as part of the deal through which Kaixin got majority control of its dealerships, the company is obligated to make certain payments over a six-year period. Renren has agreed to bear the obligation to make these payments and its minimum payment obligation is 4.2 million Kaixin shares. This means that Renren’s stake in Kaixin will drop to 51%.

Here’s a nice graph of the whole group. 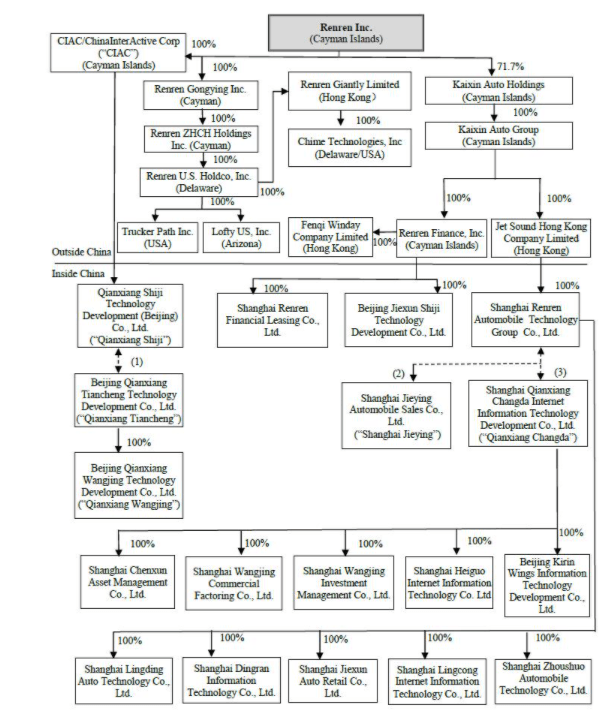 Haitaoche says it’s looking to partner with electronic vehicle manufacturers in China. There seems to be irrational exuberance on the market in relation to electric vehicle companies at the moment and the news about the merger with Haitaoche seems to be attracting significant investor interest in Kaixin.

However, it’s worth noting that shares of the company soared by 2,381% between October 14 and 19, which is several weeks before it was made public. The management’s comment was that the share price movement in October was a surprise.

Looking at the deal itself, there’s no information on Haitaoche’s financials and it’s unknown if its e-commerce platform is even profitable. This is a significant red flag and it’s unclear whether receiving a controlling stake in the combined entity is justified.

Haitaoche is based in the Cayman Islands and I can’t find its e-commerce platform. This is due to the company’s name – search haitao on the Internet and you get over 2.6 million queries. The term refers to cross-border e-commerce. Che, in turn, means vehicle in Mandarin.

Haitaoche was founded in 2015 by Mingjun Lin, who also took over as CEO of Kaixin on November 3. He’s also the founder of SUV.cn, which is a Chinese online media focused on SUV customer communities.

Kaixin is a troubled Chinese car dealer, which is locked in a legal battle with the non-controlling shareholders of its main outlets. To say that the company’s financials and shareholder structure are questionable would be an understatement.

READ ALSO  NRA files for bankruptcy, says it will reincorporate in Texas

Kaixin is owned by a failed social media company, whose main shareholder is SoftBank. However, the presence of the Japanese group does little to counter the presence of several red flags.

Kaixin gained significant investor interest shortly before news with Haitaoche was released, which raises significant questions about the transparency of information. The deal itself is shrouded in mystery, as is Haitaoche itself.

Overall, I think Kaixin could be worthless and the buying frenzy for its shares is unlikely to be sustained. Sell this one, but carefully.