We’ve finally begun the Q3 earnings season for the Gold Juniors Index (GDXJ), and several gold producers have started announcing their production results for the quarter. K92 Mining (OTCQX:KNTNF) is one of the most recent names to pre-announce, and the company reported quarterly production of ~22,300 gold-equivalent ounces (GEOs), which was below the trailing twelve-month production average of ~22,400 GEOs. However, it’s important to note that Q3 was an aberration from the trend due to deliberately lower grades while the company completed its Stage 2 Expansion. Based on K92 Mining’s industry-leading organic growth profile and exceptional margins, I would view any dips below US$4.80 as low-risk buying opportunities.

K92 Mining released its preliminary Q3 results last week and reported quarterly production of 22,300 GEOs, a 16% increase from the same period last year. It has finally completed its Stage 2 Expansion at its Kainantu mine in Papua New Guinea (PNG) after some minor delays. This has increased the processing capacity at Kainantu from 200,000 tonnes per annum to a whopping 400,000 tonnes per annum. Given that K92 Mining is a bonanza-grade gold producer, this will dramatically affect annual gold production, catapulting the company closer to the 150,000-ounce per year mark for FY2021. Let’s take a closer look at the results: 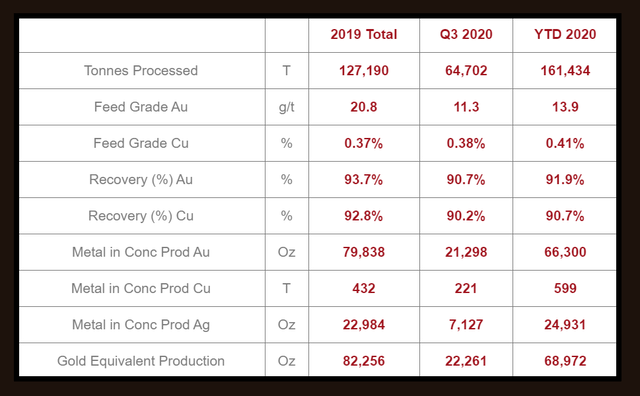 If we dig into the production results in a little more detail, it’s important to point out that this should have been a record-breaking quarter for K92 Mining. This is because mill throughput surged to 64,700 tonnes in Q3, a 31% increase sequentially and an increase of more than 102% year over year (Q3 2019: 32,000 tonnes). However, feed grades fell by more than 40% year over year to 11.3 grams per tonne gold, which more than offset the higher throughput.

Generally, it would be alarming to see grades trending materially lower as they have in the past three quarters, as is visible in the chart above. However, Q4 2019 was an unusually strong quarter with a feed grade of 25.2 grams per tonne gold, and the company purposely lowered its feed grades during Q3 to avoid the potential for gold losses during the commissioning of the Stage 2 Expansion. This means that the drop in grades in Q3 was deliberate and has nothing to do with negative grade reconciliation. The chart below confirms this, as K92 Mining is a gold producer with a very positive reconciliation between its resource model and grade control. Given that grades will increase materially in Q4 and throughput should jump to above 80,000 tonnes, we should see a blowout quarter with the potential for quarterly production of over 31,000 GEOs.

As noted by the company in its prepared remarks, this was the second full quarter of long-hole stope, which positively impacted operational flexibility. K92 Mining also mentioned that it is on track to deliver its new nameplate capacity of 1,100 tonnes per day of 400,000 tonnes per annum by year-end. Assuming the company can meet these targets, we could see annual production soar to 140,000 GEOs next year. Relative to FY2019 production of 82,200 GEOs, this would translate to a compound annual production growth rate of over 30%. This growth rate dwarfs most of the average production growth rate in the sector, which is at low-single digit levels. Besides, the growth isn’t done here, based on results from the most recent Stage 3 Expansion PEA.

If we look at the chart above, K92 Mining hopes to complete its Stage 3 Expansion in late FY2023, which would lead to a more than 100% increase in gold production from Stage 2 levels. The expectation is that Kainantu will produce an average of 318,000 GEOs per year starting in FY2024 through to FY2031, with modest initial capex of US$125 million that can be fully funded by the company. K92 Mining expects to achieve this production growth by doubling mill capacity to 800,000 plus tonnes per annum, with all-in sustaining costs expected to fall to the industry’s lowest levels (below US$400/oz). It’s hard enough to find gold producers growing production over the next few years organically, but K92 Mining being one with this type of growth combined with margin expansion makes it a rare breed in the sector. 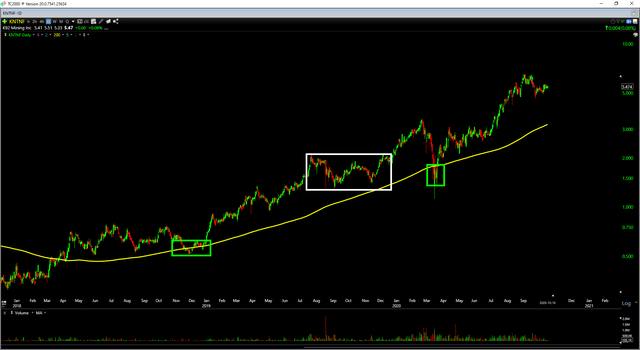 Just because the stock does not have a low-risk setup currently does not mean it is an outright sell. In my most recent article, I noted that it would make sense to take some profits if the stock went above US$5.50 before October, but there is nothing wrong with holding core positions. However, unless we see the long-term moving average play catch-up or the stock pull back to this moving average, I simply do not see a low-risk area to add more exposure. The current valuation of ~US$1.18 billion corroborates this view currently.

As we can see from the table above, K92 Mining has a current resource of 4.8 million GEOs, but most of this resource is in the inferred category (3.7 million GEOs of 4.8 million GEOs). At the company’s current market cap of ~US$1.18 billion with 215 million shares outstanding and a share price of US$5.50, it is currently trading at a valuation of US$245.83/oz based on predominantly inferred ounces. This is quite a high valuation given that K92 Mining is in a Tier-3 operating jurisdiction, and the Saracen Minerals (OTCPK:SCEXF) merger occurred at a valuation of US$256.47/oz in the #1 ranked mining jurisdiction worldwide: Australia.

While K92 Mining deserves a small premium for its high-grade ounces and industry-leading margins, the company’s resource is 77% inferred. This compares unfavorably to Saracen, whose resource is less than 50% inferred and was acquired for just below US$260.00/oz. I would argue that the fair value for K92 Mining’s ounces is US$220.00/oz vs. a current value of US$245.83/oz, which suggests the stock is no longer cheap here. This does not mean the stock can’t go higher or that it must drop 10% to trade at fair value; it merely means that on a valuation basis, it is no longer undervalued. 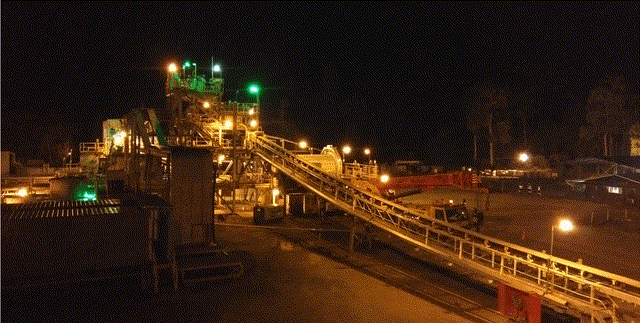 K92 Mining is on track for a strong Q4 with grades set to improve and throughput expected to jump meaningfully on a sequential basis. Meanwhile, the company has an industry-leading organic growth profile, and it could be one of the lowest-cost miners worldwide by FY2024 if its PEA projections are correct, suggesting that investors would be wise to sit tight if they are holding core positions and have already booked some profits. However, given that the stock still remains a little extended relative to its long-term moving average and its valuation is slightly above my fair value, I see no reason to add exposure to the stock above US$5.50. If the stock were to pull back below US$4.80, I believe this would be a much better buying opportunity.