Jumia Technologies Price Is Detached From Its Fundamentals (NYSE:JMIA)

Jumia Technologies AG (JMIA) is an e-commerce platform that’s 100% focused on Africa. Moreover, I’d argue that the company is still in its infancy, which carries with it several risks and opportunities. Naturally, JMIA could benefit from the vast population growth that will occur in Africa. And if the company becomes Africa’s Amazon (AMZN), this could indeed be a generational multibagger investment. However, for now, the underlying fundamentals seem detached from its valuation. In my view, the stock’s fair value is just $7.51 per share, which represents a substantial potential downside from current levels. Thus, I consider JMIA only fit for very speculative investors. Everyone else should pass up on the stock for now.

As it’s customary for e-commerce platforms, JMIA’s business model depends on: 1) its marketplace, 2) logistics, and 3) payments. These three pillars are critical for any e-commerce operation, and JMIA is no different. For instance, its market place essentially connects sellers and consumers. Then, its logistics make sure that consumers get their packages conveniently. And lastly, JMIA has made great efforts to facilitate payments in its ecosystem through its platform. Overall, an easy way to understand Jumia is to picture its first two pillars as something Amazon would implement, and the third (payments) as something akin to Alibaba’s (BABA) Alipay. 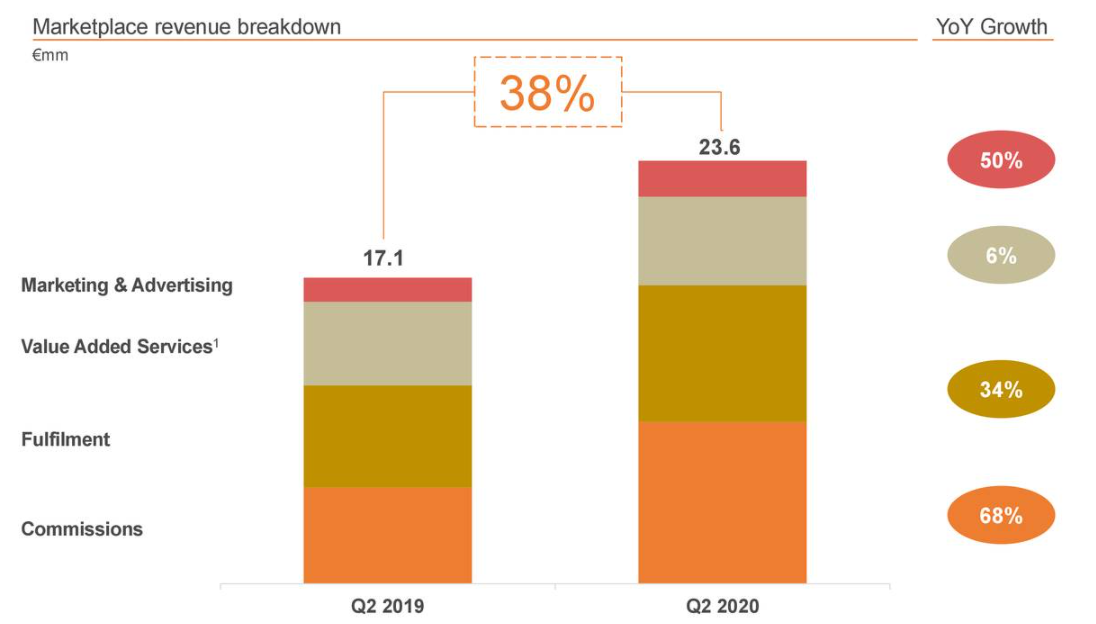 So, I don’t think there’s anything complicated about JMIA. And candidly, we all know that e-commerce will grow massively over the long term. Plus, the ongoing pandemic will only accelerate that growth. After all, more and more retail transactions are transitioning towards online purchases, and this trend shows no signs of slowing down. In my view, virtually everything will likely be bought and sold through the internet in the future. If so, then e-commerce platforms like JMIA, AMZN, and BABA will become incredibly valuable.

However, as promising as that sounds, the reality is that JMIA isn’t AMZN or BABA. The critical difference is that JMIA is structurally unprofitable as of today. Moreover, I’d argue that there are no signs of this slowing down. For context, the company currently has an enormous cash burn rate of roughly $167.8 million per year (based on its TTM figures). And most of these negative free cash flows are due to JMIA’s massive operational expenses required to run its business. In particular, the company’s SG&A expenses, which are primarily marketing expenditures, amount to $272.7 million (TTM). This is what swings JMIA’s gross profits of $96.1 million into a profound loss.

Naturally, bullish investors would justify this by saying that the company is still in its growth stage. Thus, it’s normal to see operational losses as long as there’s revenue growth. Such future revenue growth will then be monetized at scale, which would make up for the losses of the growth stage. However, in JMIA’s case, the reality is that there’s not that much growth in the first place. You see, since 2017, the company’s revenues have increased by approximately 22% CAGR. This is a healthy growth rate, but it’s not good enough to justify a P/S ratio of roughly 6 (depending on how you measure it). At that stage, Amazon was growing much faster. Also, have in mind that JMIA’s revenues don’t even have positive margins!

And besides, the African market is still tiny compared to AMZN or BABA’s respective countries. As you might imagine, Africa might be experiencing explosive population growth, but their per capita income is nothing compared to America‘s or China‘s per capita figures. So, even if JMIA’s long-term thesis has merits (which it does to some extent), it’s going to take many years (likely decades) to materialize. Plus, the US and China have much more political and social stability than Africa, which investors need to contemplate as well. This is especially true if you’re making a multi-decade bet on the continent.

But on the flip side, if Africa becomes the next China and Jumia retains its commanding position, the upside is substantial. This is because the current population forecasts predict that by 2050, the continent will have approximately 2.4 billion people. To put that figure in perspective, the US’s current population is just 331 million. And even China, which houses the world’s largest population, has only 1.44 billion people. So, it’s undeniable that Africa’s demographics can act as a generational secular tailwind for JMIA. This, in turn, could make the stock a great long-term bet.

Ultimately, prudent investors might like a good growth story, but they must also turn their attention to the company’s fundamentals. And here, as I’ve previously mentioned, is where JMIA’s bullish thesis crumbles. You see, I think it’s reasonable to treat the company as a speculative bet on future African growth. However, at the current valuation, you’re just banking on everything working out correctly over the next decade or so. And at that point, I believe the stock’s investment proposition goes from speculative to almost gambling. 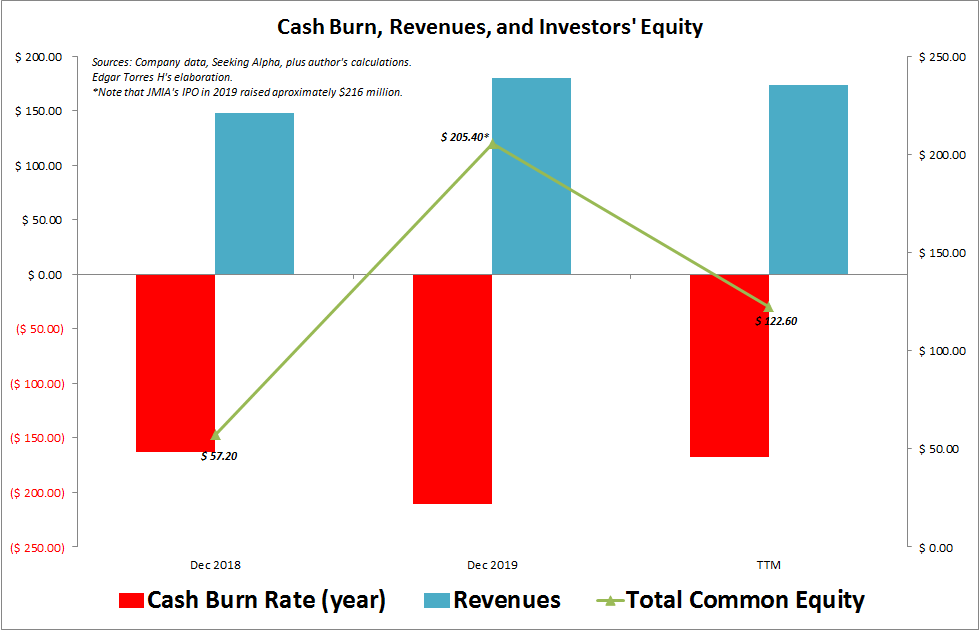 It’s worth mentioning that pricing a company with no profits (and has never been profitable) is challenging in and of itself. Usually, I’d turn to its FCF for a valuation estimate. However, even then, JMIA’s FCF turns out to be negative. Thus, I believe the only fair proxy for a valuation model in this stock is through its revenues. And as you might expect, valuing sales is much more difficult. This is because, as investors, we have to make two key assumptions. First, JMIA’s future revenues growth, and second, its eventual margins.

For this, we must turn to its historical growth rate and compare it with similar successful companies. First, since 2017, the company has increased its sales at a healthy 22% CAGR. Then, I multiply that figure by 3 (which is an optimistic input) and add it to a baseline PS ratio of 1. As for JMIA’s eventual hypothetical margins, I assume it’ll do at least 15%. This is again another very optimistic assumption. For instance, AMZN’s net margins are much lower at roughly 5%. With this, I built my valuation model for JMIA.

READ ALSO  JNUG Could Rally By 90% Over The Next Year (NYSEARCA:JNUG) 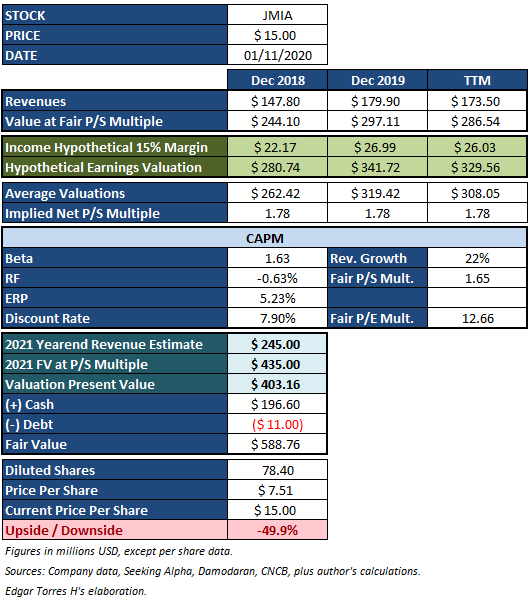 As you can see, even under these very optimistic propositions, the stock appears to be considerably overvalued. Concretely, my fair value estimate per share for JMIA is just $7.51, which implies a 49.9% downside potential. However, please note that the stock’s 52-week low is $2.15, which occurred in March of this year! So, my price target is undoubtedly not out of the question. This is why I consider JMIA an incredibly risky stock at these prices.

JMIA is a promising stock on paper. I deem a small position in the company could make sense for some speculative investors but at a much lower valuation. As of today, the shares are so detached from its underlying fundamentals that I don’t think they’re worth chasing it for now. Plus, I’d argue that purchasing JMIA at these levels can only be justified if you consider it’ll become Africa’s Amazon. And while this can very well happen, it’s also possible that Amazon or Alibaba eventually set their sights on Africa and dethrone JMIA. It’s simply too early to tell. Thus, from an investment perspective, I think it’s better to be prudent and pass up on JMIA for now.

Thank you for reading, and good luck.