Julius Baer will withhold millions of francs in bonuses from its former chief executives Boris Collardi and Bernhard Hodler, as a result of a South American money-laundering scandal dating to their times leading the Swiss wealth manager.

The bank is seeking to withhold more than SFr2.5m ($2.8m) of Mr Collardi’s total deferred pay after an internal probe deemed that he failed properly to oversee the private bank, which has SFr400bn in assets, according to people familiar with the decision.

Mr Collardi left for rival Pictet in 2017 after eight years as chief executive of Julius Baer. The amount to be withheld has not been finalised and is set to include a deferred cash component of about SFr1.3m, the people said.

Because Mr Collardi left to join a competitor, he had already given up all of his deferred pay in shares. The ultimate forfeit represents only a fraction of his earnings from Julius Baer. For example, he earned SFr6.5m in 2016 alone.

Mr Hodler — the former chief risk officer who succeeded Mr Collardi before himself being replaced last year — is expected to lose a similar amount. The duo’s penalties would have been greater but, owing to company rules, had to be limited to a certain percentage of their pay in specific years, the people added.

“Boris is fighting it . . . more on principle than anything else,” said one source. Another added: “Obviously he is very unhappy and embarrassed about this.”

Mr Collardi and Mr Hodler were not the only senior employees probed over the scandals, which prompted top shareholders to demand the bank withhold pay wherever possible, some of the people familiar with the decisions said.

The leadership of the Latin American business and compliance staff involved were also examined and some of their pay was held back too, albeit on a smaller scale than the top executives, the people added.

In February, Julius Baer was sanctioned by Switzerland’s Financial Market Supervisory Authority (Finma) for falling “significantly short” with its anti-money laundering controls between 2009 and 2018, leading to multiple high-profile incidents.

Two years ago, a former Julius Baer banker based in Panama was convicted in a Miami court of helping launder $1.2bn embezzled from Venezuela’s state energy company, Petróleos de Venezuela.

Julius Baer is also in talks with the US Department of Justice to potentially pay tens of millions of dollars to resolve a money laundering and corruption case linked to international football’s governing body, Fifa.

The wealth manager has been banned from making any significant acquisitions until Finma deems its compliance and controls have been improved. The regulator has also said it is examining whether to commence proceedings against any individuals involved, including executives in supervisory positions.

Julius Baer chairman Romeo Lacher said in a letter to shareholders in April that the board was taking “further preventive measures . . . to ensure an appropriate assessment of the impact on the deferred compensation of senior managers earned during the respective years of service” and that some of their actions were “not representative of today’s risk culture”. 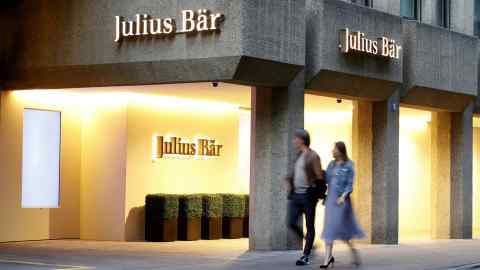 During Mr Collardi’s tenure, Julius Baer was at the forefront of a push by Switzerland’s private banks to manage the wealth of the world’s new ultra-rich, embarking on an aggressive and acquisitive expansion across Asia and other emerging markets.

Whilst elevating the company into the top ranks of Swiss wealth managers, the pace of Julius Baer’s growth led to questions about the robustness of its compliance checks on clients’ sources of earnings. It has since closed the offices where the scandals originated, including in Panama, Peru and the Bahamas, and reduced the number of countries in which it operates.

Philipp Rickenbacher, Julius Baer’s current chief executive, has sought to move it on from the damaging regulatory probes and ended its strategy of rapid asset gathering, instead focusing on doing more business with its most profitable existing clients.