In most countries, judges take on the mafia. In Kyiv’s district administrative court, some of the justices are the mafia, say anti-corruption investigators.

Even by the standards of Ukraine’s notoriously corrupt justice system, the allegations stemming from intercepted phone calls released by Ukraine’s anti-corruption bureau, known as NABU, are extraordinary. The recordings were made during an investigation into Judge Pavlo Vovk, the head of the administrative court in the Ukrainian capital.

NABU alleges that Mr Vovk, whose name means wolf, conspired with several fellow judges to gain influence over other courts and government bodies by issuing rulings for purposes of blackmail, as political favours or for kickbacks. The allegedly corrupt judges have been dubbed “the wolves” by local media.

The case highlights how far Volodymyr Zelensky, a former comedian elected president last year on promises to “break the system” of graft in the country, is from fixing it. Judicial corruption is a linchpin of oligarchic influence, allowing wealthy business owners and politicians to trade favours, protect their interests and take down enemies. Tackling graft among judges is a top priority for the IMF, the EU and international investors.

In one 2019 phone call, a voice resembling Mr Vovk’s is heard conspiring with a judge to potentially bring down the government by ruling that its coalition in parliament no longer existed.

“Did you doubt our political prostitution?” the voice said before adding: “We have been waiting for this moment for such a long time. Should I remind you of everything?”

In another phone call that year, a voice that NABU alleges is Mr Vovk’s derided senior officials before boasting: “If they knew what processes we are behind I think they would shut the f*** up.”

NABU accuses Mr Vovk and a handful of other judges at the court, which specialises in hearing appeals against government decisions, of “seizing power” throughout the judiciary, sometimes initiating the required court hearings themselves using accomplices. 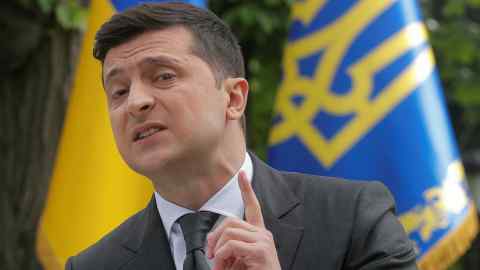 “The participants of the criminal organisation, led by the Kyiv district administrative court’s head, in fact took over functions of other authorities and made . . . decisions in the interests of political elites and business circles, as well as in their own interests, interfering in any state processes,” NABU said.

Last week, NABU released another statement which included a recording of a voice it claims is Mr Vovk’s bragging about the influence he held over members of Ukraine’s High Council of Justice. Hours later, the council, which is responsible for disciplining judges, declined a request by prosecutors to suspend Mr Vovk and other judges under investigation.

Responding to a request for comment from the Financial Times, Mr Vovk said the “recordings made public contain doctored parts of phrases and conversations of people, the voices of whom are to a degree similar to my voice and the voices of my colleagues”.

Mr Vovk added: “However, I can confidently affirm that there were no such conversations by me and my colleagues. This is without doubt a falsification.” Pledging to defend himself, Mr Vovk accused NABU of “creating an illusion” in order demonstrate its effectiveness in the fight against corruption.

Daria Kaleniuk, head of Kyiv’s Anti-Corruption Action Centre, an NGO, said Mr Vovk was “controlling” and “firing and hiring” judges and members of judicial oversight bodies. His influence was exploited by politicians to “craft politically useful decisions for them”, Ms Kaleniuk said.

Activists and judicial experts have called upon Mr Zelensky to meet IMF conditions by submitting legislation to shut down the court by transferring its authority to the Supreme Court. A person close to the president said he was considering whether to shut down Mr Vovk’s court. But in a Facebook post two weeks ago Mr Zelensky’s office suggested he had no right to interfere in the judiciary.

NABU, which was set up with western backing, has come under political attack. Late last month, the constitutional court upheld an appeal brought by dozens of pro-Russian MPs who claim that the appointment of Artem Sytnyk as NABU director in 2015 was unconstitutional. Mr Sytnyk has held on to his post because there is no mechanism to remove him. The court is expected to rule shortly on another case claiming NABU itself was set up illegally.

Mr Sytnyk said attempts to disband his bureau were intended to halt corruption probes, including the case of Mr Vovk.

The formation of NABU was a significant success of the anti-graft campaign of Mr Zelensky’s predecessor, Petro Poroshenko, alongside the creation of a new anti-corruption prosecutor’s office, a rebooted Supreme Court and mandatory asset declarations by public servants.

Thousands of judges have been made to reapply for their positions subject to evaluation of their qualifications and their low salaries have been increased. But the process ceased last year after Mr Zelensky’s ruling coalition adopted legislation which ousted members of a vetting commission.

Formation of a new anti-corruption court was completed in the first months of Mr Zelensky’s presidency. But little has been done to further reform courts whose rulings are often swayed by pay-offs and political patronage.

Sergii Koziakov, a law professor who led the now suspended judicial vetting commission from 2014-19, said: “Together with halting of the vetting of judges, the situation in recent years around the Kyiv district administrative court — which holds extraordinary powers in hearing disputes involving state bodies — has negatively affected the judiciary over the past year, radically hampering judicial reform.”

Mikheil Saakashvili, the former Georgian president who is advising Mr Zelensky on reforms, has proposed a revolutionary judiciary overhaul with wider use of jury trials, currently rare in Ukraine.

“The president himself wants to change the system,” he said, pointing to “huge resistance from vested interests”.

Another informal working group is separately drafting court reforms for the president, according to a person involved.

But the inability of authorities to reign in Mr Vovk has prompted activists to suggest Mr Zelensky lacks political will and could be an accomplice.

“Zelensky should dissolve this court. However, his silence protects Vovk,” Ms Kaleniuk said.