Boris Johnson had previously called it “a nuclear deterrent”, warning that to impose a second national lockdown to tackle Covid-19 in England would be a “disaster” and would inflict “misery” on the public. But on Saturday he hit the red button.

The decision, taken at a bleak cabinet meeting at lunchtime on Saturday, will cause further economic destruction and has left the prime minister struggling to contain the political fallout.

If the mood among Tory MPs opposed to tighter restrictions that evening was already “nuclear” — in the words of one — it soured even further on Sunday as Cabinet Office minister Michael Gove conceded that the month-long lockdown could turn out to be open-ended.

“Colleagues are very irritated at the way this was done. Most ministers and cabinet ministers are apoplectic. A second lockdown will aggravate the economic pain,” said Robert Syms, MP for Poole. 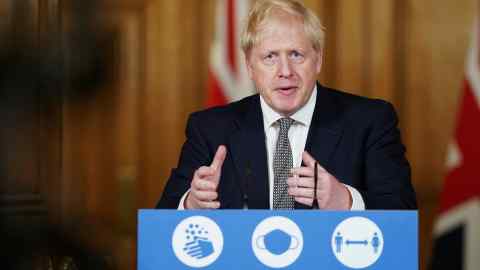 Mr Johnson had raised expectations back in July when he heartily predicted a “return to normality” by Christmas.

Instead he is plunging England back into a new lockdown described by Graham Brady, chairman of the influential 1922 Committee of backbench Tories, as a “catastrophic blow”. “We should all worry that, like the first lockdown, the second could grow to something that might drag on for months,” he said.

Mr Johnson is likely to face hostile questions from his own side when he sets out the detailed plans in parliament on Monday.

Then on Wednesday he faces a rebellion by some Tory MPs when the new restrictions are put to a House of Commons vote — although he should win easily with Labour support. The opposition party’s leader, Keir Starmer, called for a national circuit breaker two weeks ago.

The scale of any uprising will be measured against an earlier vote on October 13 when 42 Conservative backbenchers refused to back a 10pm curfew for pubs.

Some senior Conservatives believe the prime minister’s popularity is souring among grassroots members, who question the wisdom of the second lockdown. A major rebellion would dent his authority further.

Tim Montgomerie, a former adviser to Mr Johnson in Downing Street, was among those asking how long the leader would remain in power. One MP said: “My members are all asking me who is going to be the next party leader.”

The prime minister was first advised by his scientific advisers five weeks ago to carry out an immediate “circuit breaker” lockdown. Then a few weeks later he ignored calls from Labour to implement the idea.

But reluctantly, eventually, Mr Johnson bowed to the merciless reality of the pandemic.

Gove saying that it could go on much longer has changed things, backbenchers on the WhatsApp groups think it’s a disaster

Although he prefers to talk about the introduction of “tougher national measures” that come in on Thursday, the new policy is in reality the circuit-breaker advocated by Labour that he previously denounced.

One cabinet minister said the decision to put the whole of England into a second lockdown was taken by “consensus” after new evidence suggested the NHS would be overwhelmed by early December.

But the mood among Mr Johnson’s cabinet, gathered for a Zoom call on Saturday, was said by one member to be “dismay”.

Former Brexit minister Steve Baker — who fears the economic and wider health consequences of the lockdown policy — is among the sceptics who could still be won over.

READ ALSO  Stocks rally as dollar and Treasuries pull back

Chancellor Rishi Sunak had been seen by Tory MPs as their bulwark against tougher national restrictions, but he ultimately bowed to warnings from Chris Whitty, chief medical officer, and Patrick Vallance, chief scientific adviser, that a health catastrophe was approaching. 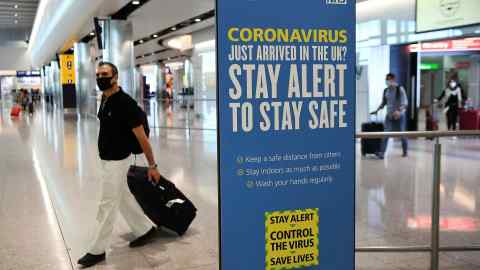 Mr Sunak was left scurrying to produce the latest of several upgrades to his “winter economic plan” — set out on September 24 — to increase furlough support during the lockdown. This week he is expected to deliver yet another overhaul of that plan, this time to help the self-employed.

The chancellor’s allies said there had been a “collective” decision to impose the lockdown, but Mr Sunak was lying low and his Twitter feed spoke about “the PM’s announcement on further restrictions across the country”.

Mr Sunak had been the leading advocate of the “balanced approach”, which saw the government attempt to contain the virus using a series of regional lockdowns — a strategy that is now in tatters.

For weeks Mr Johnson and Mr Sunak ratcheted up their “regional” approach to tackling the virus — and the economic support needed to sustain the policy — but in the end Covid-19 overwhelmed it.

Labour and the Liberal Democrats were quick to argue that Mr Johnson should have accepted reality — and scientific advice — earlier, but the prime minister said he still “passionately believed” it was right to try the regional approach. 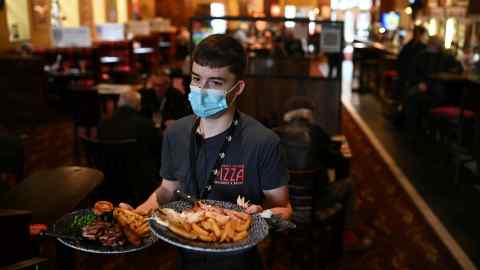 In an attempt to limit the economic damage, Mr Sunak insisted the new lockdown, scheduled to end on December 2, must be time-limited and less open-ended than the first lockdown introduced on March 23.

But the cabinet also agreed that the new tough lockdown measures could be retained as part of a “regional approach” after December 2, under a newly-created “tier 4”, if infection rates remained high.

Those reassurances given to Mr Sunak looked less robust on Sunday when Mr Gove explained that the lockdown could continue beyond December 2 after all.

“If government said that December 2 was the limit of the lockdown they could have contained the discontent,” said one rebel MP. “Gove saying that it could go on much longer has changed things, backbenchers on the WhatsApp groups think it’s a disaster.”

England’s new coronavirus lockdown will be in place for a minimum of 27 days starting on Thursday. Here are the measures announced by prime minister Boris Johnson on Saturday: