Joe Kennedy learns this is not his grandfather’s Democratic party

When Ed Markey was first sworn in as a member of Congress in 1976, he was a young Democratic upstart who had come out on top of a 12-candidate primary contest.

More than four decades later, Mr Markey is a 74-year-old US senator from Massachusetts facing one formidable primary challenger: Joe Kennedy III, a 39-year-old Democratic House member who is also the grandson of Robert F Kennedy, and the great-nephew of John F Kennedy.

It is a primary contest that has sharply divided Democrats in both New England and Washington, DC, exposing ideological and generational fissures in a party at pains to unite heading into November’s presidential election.

Democratic speaker of the House Nancy Pelosi and the late congressman and civil rights leader John Lewis threw their weight behind Mr Kennedy, while Mr Markey is backed by progressives such as Elizabeth Warren and Alexandria Ocasio-Cortez.

When Mr Kennedy, a popular public figure, first announced he was challenging Mr Markey last September, many in Massachusetts — a state long associated with the Kennedy family — wrote off the senator’s chances. Critics questioned whether the relatively low-profile septuagenarian should bow out gracefully and retire, after a Suffolk University poll gave Mr Kennedy a 14-point lead.

But as Democratic primary voters head to the polls on Tuesday — or mail their ballots in an election year tainted by coronavirus — the standings have switched, with Mr Markey leading in three recent polls, including by a 10-point margin in the latest Suffolk survey.

READ ALSO  What exactly is a ‘lockdown’?

David Paleologos, director of the Suffolk poll, said the shift was a “sign of the times”.

If Joe Kennedy III comes up short this week, he will be the first in his family to lose a primary in Massachusetts. He comes from a long line of Democratic politicians, including not only his grandfather and great-uncle, but also his father, Joe Kennedy II, who was a congressman in the eighties and nineties. His great-uncle, Edward “Ted” Kennedy, was a US senator for nearly half a century, until his death in 2009.

Peter Ubertaccio, a political-science professor at Stonehill College in Easton, Massachusetts, said Mr Markey had “flipped the script” by attracting the support of millennials following an endorsement from Ms Ocasio-Cortez.

She became the youngest congresswoman in US history in 2018 after defeating an older, white male incumbent in a Democratic primary, and formed an unlikely alliance with Mr Markey in Congress on the Green New Deal, sweeping legislative proposals that would cut greenhouse gas emissions and invest heavily in infrastructure.

Left-leaning groups who are associated with the congresswoman, including Justice Democrats and Sunrise Movement, have also backed Mr Markey.

“Alexandria Ocasio-Cortez is a rock star in Democratic party circles, young, progressive activist circles,” said Mr Ubertaccio. “She and others who coalesced around Ed Markey helped to give his candidacy a new look.”

“Ed Markey really did find his voice,” he added. “He went from being well-regarded but somewhat unknown to a very aggressive and eloquent champion of his causes . . . I think the degree to which he aggressively pushed back against the Kennedy campaign took a lot of people here by surprise.”

Mr Paleologos agreed, saying: “None of us expected it.”

The veteran pollster compared Mr Markey to Clark Kent, Superman’s alter-ego, saying the senator had unbuttoned his shirt and “there is a big P on his chest for policy, and suddenly he is this superhero”.

“It has been a stunning transformation . . . he is nearly unrecognisable in this version from the Ed Markey everybody has known here for a long time.”

Kennedy supporters push back on suggestions that the congressman is not a progressive, pointing to his record on race relations and economic issues. Mr Kennedy, who was first elected to the House in 2012, draws much of his support from lower-income voters and people of colour.

“A centrist does not spend their time in the poorest communities in Massachusetts, and that is what he has done. That is where his support is,” Ms Marsh said.

People close to Mr Kennedy also bristle at the Markey campaign’s focus on his extended family, saying the congressman has always been reluctant to leverage the lineage.

Mr Markey earlier this month released an attack ad that riffed off JFK’s famous inaugural address — “Ask not what your country can do for you” — and in one heated debate, repeatedly went after the Kennedy family’s wealth. 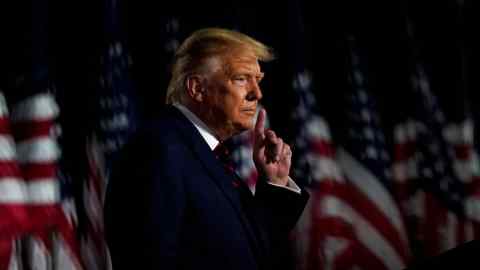 Fernand Amandi, a Democratic pollster who describes Mr Kennedy as a friend, said the congressman has “never utilised or engaged in the type of entitled attitude that one might expect the scion of a heralded political family might have”.

“He has understood that he has had to work for everything he has ever gotten in politics, while at the same time acknowledging that he is privileged in some of the opportunities that he has had,” he added.

Most in Massachusetts expect Mr Kennedy to stay in politics even if he fails in this week’s primary, noting that another Senate seat could open up as soon as this winter, if Joe Biden wins the presidency and taps Ms Warren for a cabinet post.

Mr Ubertaccio cautioned that any future Democratic primary would not be a “clear field” for Mr Kennedy, given the aspirations of politicians such as Ayanna Pressley — a progressive black congresswoman and ally of Ms Ocasio-Cortez — or Seth Moulton, another Democratic House member who briefly ran for president last year.

But he added that, even if he loses, Mr Kennedy remains “well liked and well regarded”.

“He is young enough to assess this campaign, figure out what went wrong, and to make another shot at it when another Senate seat opens up,” Mr Ubertaccio said. “He still has a political future ahead of him if he chooses it.”

Previous PostNation is on course to top 20 rank in business environmentNext PostKey Events This Week: Summer Is Over; PMIs And Payrolls