Joe Biden made no secret of his distaste for what he described as Donald Trump’s “love affair” with autocrats as he campaigned against the US president and vowed to make human rights a priority for his administration.

The president-elect warned that there would be no more blank cheques for Mr Trump’s “favourite dictator”, a reference to Egyptian leader Abdel Fattah al-Sisi. And Mr Biden promised to reassess Washington’s relationship with Saudi Arabia, which he called a “pariah” after the murder of journalist Jamal Khashoggi by Saudi agents two years ago. He said his administration would “make sure America does not check its values at the door to sell arms or buy oil”.

In recent weeks, the Egyptian regime detained three senior staff members of one of the country’s most respected human rights groups, charging them with belonging to a terrorist organisation after they hosted a meeting with western diplomats. Last week Saudi Arabia transferred the trial of one of the kingdom’s most prominent women’s rights activists, Loujain al-Hathloul, to a court that typically hears terrorism-related cases.

Human rights activists say Mr Sisi and Saudi Crown Prince Mohammed bin Salman were sending a message to Mr Biden. They “are basically threatening to call his bluff and setting up the perfect game of gathering chits. They arrest them and can turn around and release them when there’s pressure for reform, then turn around and arrest five more people,” said Sarah Leah Whitson, executive director of Dawn, an advocacy group for rights in the Arab world.

But people close to the Biden team expect that the president-elect will follow up on his rhetoric.

I’m not optimistic that something will happen in the way we hope — public, vocal and immediate

Tony Blinken, Mr Biden’s pick as secretary of state and a former board member of the US advocacy group Human Rights First, has previously signalled that a Biden administration would take a firmer stand against abuses in Saudi Arabia, Turkey and India, which have close security relationships with the US, as well as China and elsewhere.

In his last public comments before he was nominated, Mr Blinken tweeted about the Egyptian arrests: “Meeting with foreign diplomats is not a crime. Nor is peacefully advocating for human rights.”

Nick Burns, a former senior state department official who advised Mr Biden during his campaign, said supporting democracy and human rights would be “early priorities” for the incoming administration.

Rob Berschinski at Human Rights First, who worked with Mr Blinken during the Obama administration, said if the Biden team’s comments were taken at face value, “they’re laying out a pretty aggressive agenda in terms of promoting and protecting human rights”.

Former US officials and analysts said any punitive action could include suspending military assistance to Egypt and halting arms sales to Saudi Arabia, one of the biggest buyers of US weaponry, as well as targeted sanctions for human rights abuses. Washington provides more than $1.4bn in aid to Egypt every year, almost all of which is for purchases of US military equipment.

The Obama administration suspended arms sales for two years after Mr Sisi led a 2013 coup that toppled Mohamed Morsi, the Muslim Brotherhood leader who was Egypt’s first democratically elected president. But human rights activists argue Mr Obama stopped short of calling the overthrow “a coup” in part to avoid impeding US aid. He later restored the assistance, while the Egyptian authorities continued their crackdown.

People briefed on the Biden camp’s thinking said there was debate about how far to risk foreign partnerships by making US aid contingent on human rights practices.

Human rights activists lobbied Biden transition officials for the president-elect to issue a statement on this month’s detentions in Egypt, but one was told that this would not be possible due to “demands and priorities”. Mr Biden has made it clear he will abide by the principle of “one president at a time”, meaning he is unlikely to weigh in publicly on foreign policy matters until after inauguration on January 20.

The fear among some activists is that the desire to maintain sound relations with longstanding Middle East partners will ultimately trump concerns about rights. The United Arab Emirates, an important US ally, has drawn criticism from American lawmakers for its role in the Yemen war as part of a Saudi-led coalition and its involvement in the conflict in Libya. But it boosted its credentials in Washington by agreeing in August to normalise relations with Israel.

Prince Mohammed, the Saudi crown prince, held a secret meeting with Israeli prime minister Benjamin Netanyahu, in a sign of Riyadh’s warming — if covert — relations with the Jewish state. 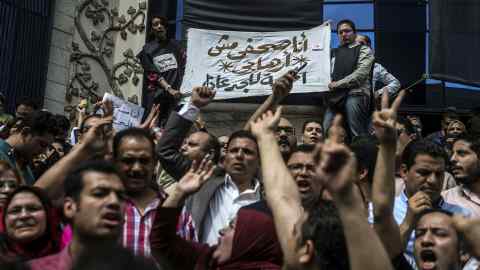 Mr Biden indicated last year that he would not sell more arms to Saudi Arabia. But scepticism remains. “I don’t think he [Biden] is going to move to suspend or cut arms sales to Saudi Arabia and certainly not to Egypt. We can expect more vocal advocacy with respect to detentions but don’t expect consequences for abuses,” Ms Whitson said. “The pressure from the military industrial complex, plus Israel, which now sees Saudi and United Arab Emirates as allies that should not be touched, will make it harder for Biden to take any proactive steps.”

Hala al-Dosari, a US-based Saudi activist, doubted a Biden administration would improve human rights. “It’s very difficult to predict because we saw during the Obama administration that he wouldn’t aggressively raise these issues,” she said. “So I’m not optimistic that something will happen in the way we hope — public, vocal and immediate.”

Still, Mohamed Soltan, a US-based Egyptian rights advocate, whose father — a former member of the Morsi government — has been in prison for seven years, was comforted by the choice of people in the Biden team.

“They understand the issues and are not ideologues,” he said. “It’s also refreshing to have the conventional channels of communication be restored to be able to formally raise and press these issues.”

Previous PostCan Poland & Hungary Crash The European Plan?Next PostExxon tries to put the worst behind it with $20 billion writedown