Joe Biden has said he would form a bipartisan commission to study court reform if elected, as Republicans moved forward with confirming Donald Trump’s third US Supreme Court justice before the election.

The Democratic presidential candidate said in an interview set to air Sunday on the 60 Minutes television programme that the US court system was “getting out of whack, the way in which it’s being handled”.

“It’s not about court packing,” Mr Biden said, referencing proposals to add new seats to the nine-member US high court. “There’s a number of other things that our constitutional scholars have debated, and I’d looked to see what recommendations that commission might make.”

The release of his comments on Thursday came as all 12 Republicans on the Senate judiciary committee voted to send Amy Coney Barrett’s nomination to the floor of the Senate for a final vote next week. Democrats boycotted the committee’s proceedings.

Court reform has become an election issue this year after the death of Ruth Bader Ginsburg, the late liberal justice, in September allowed Mr Trump to nominate a third conservative to the Supreme Court.

Ms Barrett’s expected confirmation by the full Senate will give the court a 6-3 conservative majority just in time to rule on any potential election disputes. Earlier this week, the court declined to block an extension to voting deadlines in Pennsylvania in a 4-4 split decision.

She is set to be confirmed just days before November 3, even though in 2016 Republicans had blocked Barack Obama from filling a Supreme Court vacancy months before polling day. 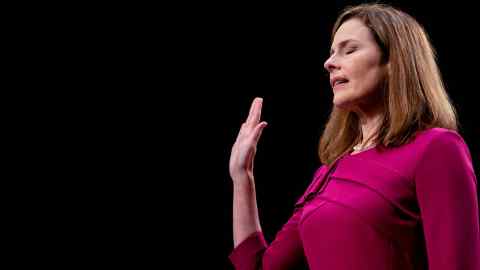 Progressive activists have pushed Mr Biden and Democrats to back court packing, a manoeuvre last attempted by Franklin Delano Roosevelt in the 1930s. The unpopular move failed but is regarded as having successfully pressured the Supreme Court to back down from its opposition to Roosevelt’s New Deal reforms.

Mr Biden has said he is “not a fan” of the idea, but has not firmly ruled it out. Some Senate Democrats have adopted a similar posture, saying they would be open to the idea if Republicans moved ahead with Ms Barrett’s confirmation.

Other possible court reform measures include jurisdiction-stripping, where a Democratic-controlled Congress would pass laws that explicitly state that the Supreme Court cannot review them, and term limits that would force justices to leave the high court and take up a position on the lower appeals courts after a number of years.

Previous Post‘We can do this!’ — Merkel’s famous words five years on after refugee influx to GermanyNext PostBeijing promises response to ‘political oppression’ after US designates six Chinese media outlets as foreign missions