Democrat Joe Biden has named Kamala Harris as his vice-presidential running mate, making the senator from California the first African-American woman on a main US party’s presidential ticket.

Mr Biden, who served as vice-president in the Obama administration, announced his pick on Tuesday.

“I have the great honor to announce that I’ve picked Kamala Harris — a fearless fighter for the little guy, and one of the country’s finest public servants — as my running mate,” he said on Twitter.

The Democratic candidate, who enjoyed a close personal relationship with former president Barack Obama, previously said he was looking for a running mate who was “simpatico with me, both in terms of personality as well as substance”.

On Tuesday, Mr Biden referenced Ms Harris’s friendship with his late son, Beau Biden, who died in 2015 from brain cancer. The younger Biden was attorney-general of Delaware from 2007 until shortly before his death in 2015.

“Back when Kamala was attorney-general, she worked closely with Beau,” he said. “I watched as they took on the big banks, lifted up working people, and protected women and kids from abuse. I was proud then, and I’m proud now to have her as my partner in this campaign.”

Mr Biden and Ms Harris are expected to appear in-person together at a campaign event in Wilmington, Delaware, on Wednesday.

Mr Biden’s announcement comes just days before the Democratic National Convention, when the former vice-president, 77, will formally accept his party’s nomination for president.

Ms Harris will also speak at the virtual convention, which will be broadcast from multiple locations around the country, rather than a crowded convention centre, due to the Covid-19 pandemic. Ms Harris will debate the current vice-president, Mike Pence, in October, ahead of November’s election.

Mr Biden currently leads Donald Trump by 7.2 points nationally, according to the Real Clear Politics polling average. The margins are closer in battleground states that are key to winning the Electoral College, but recent polls show the former vice-president with a significant advantage in crucial states such as Florida, Michigan and Pennsylvania. While vice-presidential picks have typically not had a significant effect on election outcomes, analysts have eagerly anticipated Mr Biden’s selection, given he will be the oldest president in US history if he wins.

Ms Harris, 55, was elected to her first term in the US Senate in 2016. Before that, she was attorney-general of California, and previously served as district attorney of San Francisco.

Ms Harris is the first South Asian-American senator in US history and the second African-American woman to be sworn into the upper chamber.

She launched a bid for the Democratic presidential nomination last year to much enthusiasm, with some 20,000 people attending her kick-off event. She earned plaudits for strong debate performances, including one appearance in June 2019 when she went after Mr Biden for opposing mandatory school busing, a policy intended to integrate black and white students.

But she failed to break through in a crowded field and suspended her campaign in December, two months before the Iowa caucuses, saying she had not raised enough money to keep running.

A graduate of Howard University, a historically black college in Washington, she earned her law degree from the University of California, Hastings, and started her career as a county prosecutor. 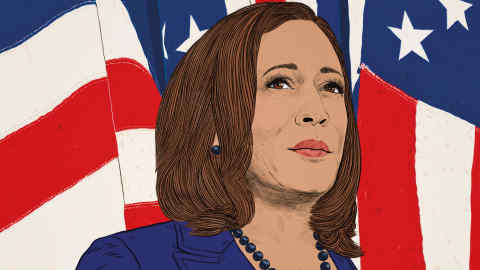 In 2014, Ms Harris married Douglas Emhoff, a partner at DLA Piper, the global law firm, and became stepmother to his two children.

Democrats had pushed Mr Biden to select a black woman as his running mate in light of the widespread protests following the killing of George Floyd earlier this year.

However, her record as a prosecutor, including her reluctance as attorney-general to get involved in cases involving police violence, is expected to put her at odds with the Democratic party’s more progressive wing, which has endorsed defunding police forces across the country.

Ms Harris is the third woman to be a US vice-presidential candidate, after Geraldine Ferraro ran with Walter Mondale on the Democratic ticket in 1984. The pair was defeated in a landslide by Ronald Reagan and his running mate and future president George HW Bush. In 2008, Sarah Palin ran alongside John McCain, who lost to the Obama-Biden ticket.