JinkoSolar Is Likely To Rebound (NYSE:JKS)

We think the shares of JinkoSolar (JKS) can make a comeback after the COVID-19 induced selloff that will stump solar market growth and ASPs this year.

But the Chinese market, the biggest in the world, is likely to make a comeback towards the end of the year and the present shake-out ultimately favors Tier-1 players like JinkoSolar.

Then there are the secular tailwinds of the ever more favorable economics of solar power versus other sources of electricity production, the increasing viability of energy storage, and the opportunity that countries will invest themselves out of the COVID economic slump through green new deals.

There was a time when polysilicon, the crucial ingredient for producing silicon based solar panels, was expensive due to capacity shortages and alternative technologies for solar panels like First Solar’s (NASDAQ:FSLR) CdTe based thin film technology used to have a cost advantage (albeit not a conversion efficiency advantage) over companies like JinkoSolar which produced silicon based panels.

But those days are gone, and JinkoSolar is now the biggest solar producer in the world and a cost and technology leader. However, the pandemic has a negative influence on the sector and that’s clearly visible with the shares falling steeply, and they have yet to recover:

Nevertheless, we think there are several reasons for seeing a bright future for the company. First up, a number of general trends creating a favorable background for the industry as a whole:

But there are also some reasons more particular to JinkoSolar:

At first sight, the last five years have been pretty good

Revenues have grown pretty spectacularly and the company has been profitable and generating substantial amounts of EBITDA during most of the times.

One thing to keep in mind is that the market for solar panels remains cyclical, that is, it goes through bouts of overcapacity followed by price destruction and industry rationalization. This is quite visible in the quarterly revenue growth figure:

But it’s also clear that periods of negative growth have been pretty brief, especially after the major solar slump in 2012.

With revenue up more than 6-fold since the start of 2013 after that slump ended, and with most of the last five years producing fairly solid earnings, at first sight, it might seem a bit curious that the share price, after recovering from the 2012 slump, hasn’t really been doing better:

Apart from the cyclical nature of the industry, we think the main reason for this disappointing long-term share price performance has to do with cash flow and balance issues, the product of continuous capacity expansion, which we will discuss below.

First, we’ll propose what can solar companies can do to limit the impact of the cyclical nature; in our view, there are several ways:

We would argue that all of these apply to JinkoSolar. For instance, they have their high efficiency N-type mono-crystalline cells and their new Tiger Pro series module which can generate a maximum output of 580 watts, setting them apart in the industry. From the earnings deck: 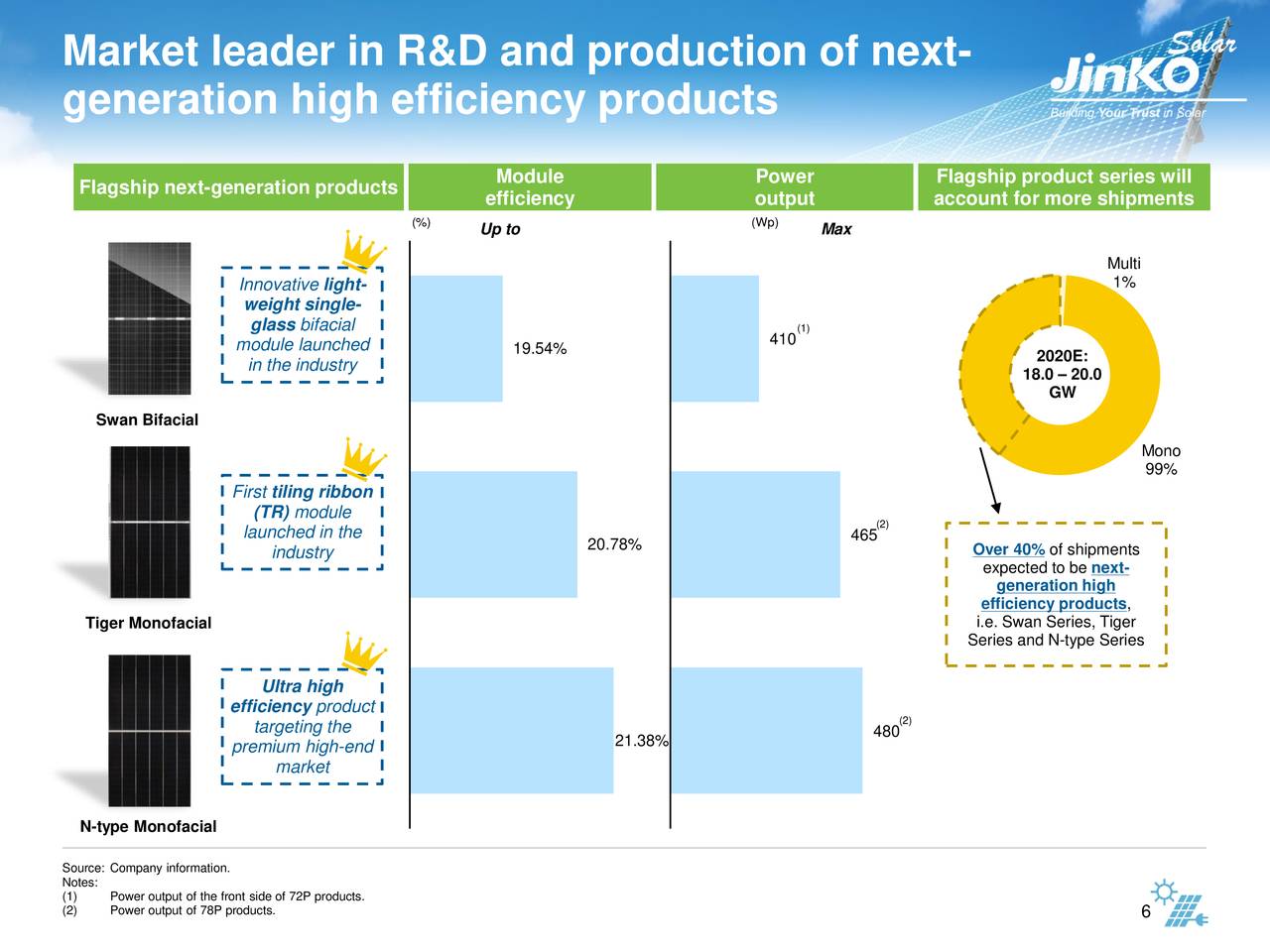 The company also produces dual-glass modules, and while demand for it is increasing in China, it’s from a low base (5% of sales). Then there are the bi-facial modules, like the Swan module:

“The Swan module represents the next iterative development in bifacial power generation as it gradually becomes a mainstream technology. By combining high-efficiency mono PERC Cheetah bifacial cells and clear DuPont Tedlar film for backsheets, Swan modules can achieve power output of up to 400W on the front side and up to 20% energy gain from the rear side. Leveraging the transparent backsheet, Swan bifacial panels can produce the same power output levels and rear-side energy gain as dual-glass bifacial modules, weigh less, are easier to install and include a 30-year power warranty.”

These bi-facial modules are a rapidly growing premium part of the market and JinkoSolar has broken the world convergence efficiency record in this segment.

There have been previous bouts of consolidation in the industry with the sector increasingly dominated by a few big names like JinkoSolar, Canadian Solar (CSIQ) and First Solar (FSLR), especially after the bankruptcy of former market leader Suntech Power (STP). Others, like Trina Solar (TSL) and JA Solar have been taken private.

Management also argued that Chinese authorities heavily promote ultra-high voltage projects that favor Tier-1 players such as JinkoSolar and there are a few other policy changes (Q1CC):

“According to the latest policy from China’s NDRC, each province is required to set the lowest non-hydro renewable generation ratio ranging from 5% to 25%. In addition, reforming policies in electricity trading and distributed power trading plants will also improve solar power utilization efficiency, accelerating the diversification of China’s energy mix.”

The CC also mentioned a raft of other beneficial policy changes around the world in places like the Netherlands, Germany, Vietnam and others that emphasize the increasing role of alternative energy in general and solar power in particular.

That consolidation is supposed to make the industry less cyclical with less violent downturns, but nevertheless, the industry is now going through another downturn as a result of the pandemic, which has complicated shipping, sourcing and constructing unevenly around the world.

The upshot, though, is that management estimates that the pandemic will reduce installations by 25% this year and this has a predictable effect on ASPs.

READ ALSO  Everything We Assume Is Permanent Is Actually Fragile

These started declining at the end of March, beginning of April and have dropped almost 10% from roughly $0.30 per watt in Q1. It’s no surprise that declining prices and market volumes are a bit of a challenge for any company, so this is the main reason for the relatively soft Q2 guidance and the slump in the share price.

Q1 results were still pretty good, though. From the earnings deck: 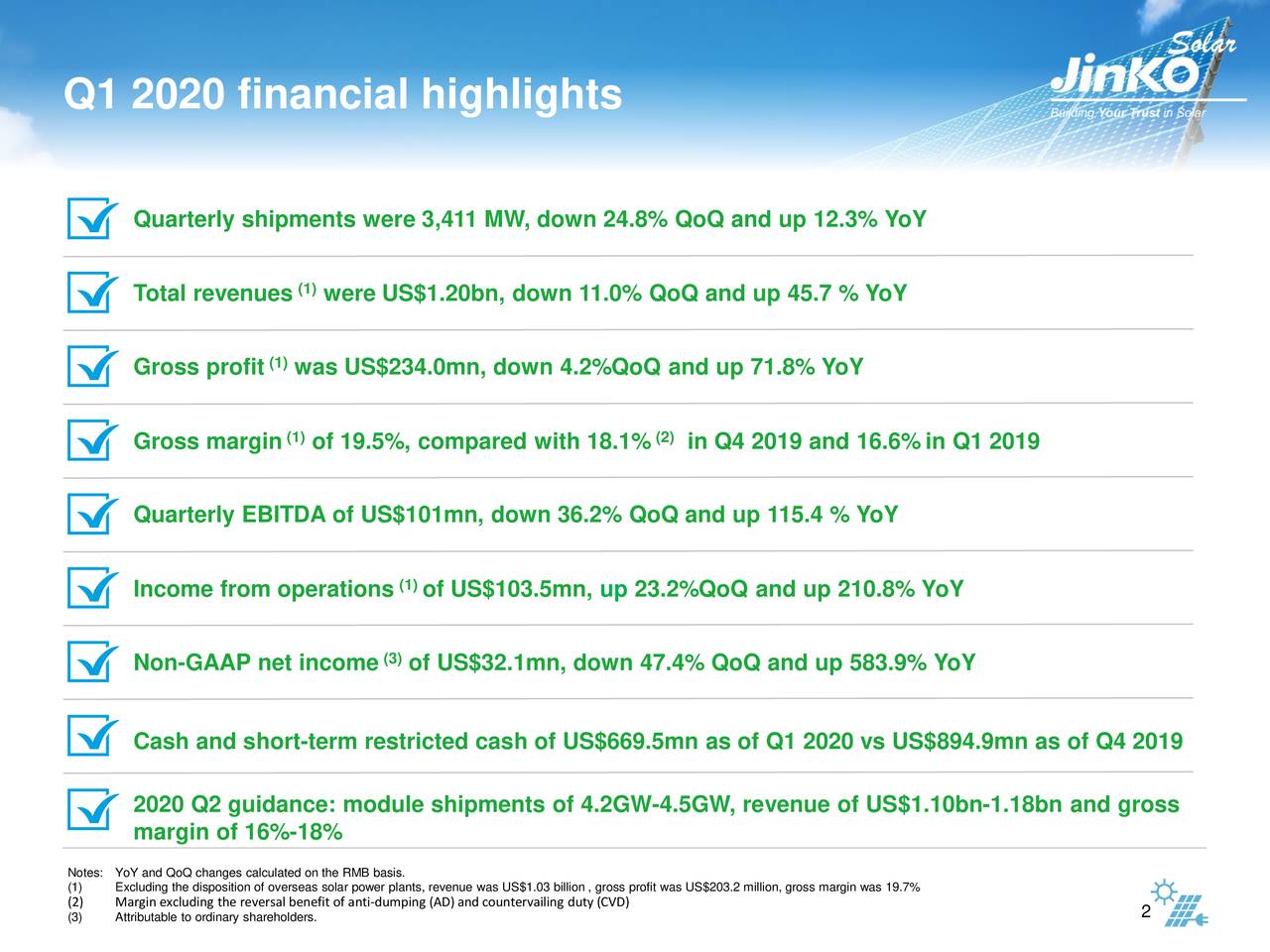 These results conform with expectations; the disappointment was in the guidance. 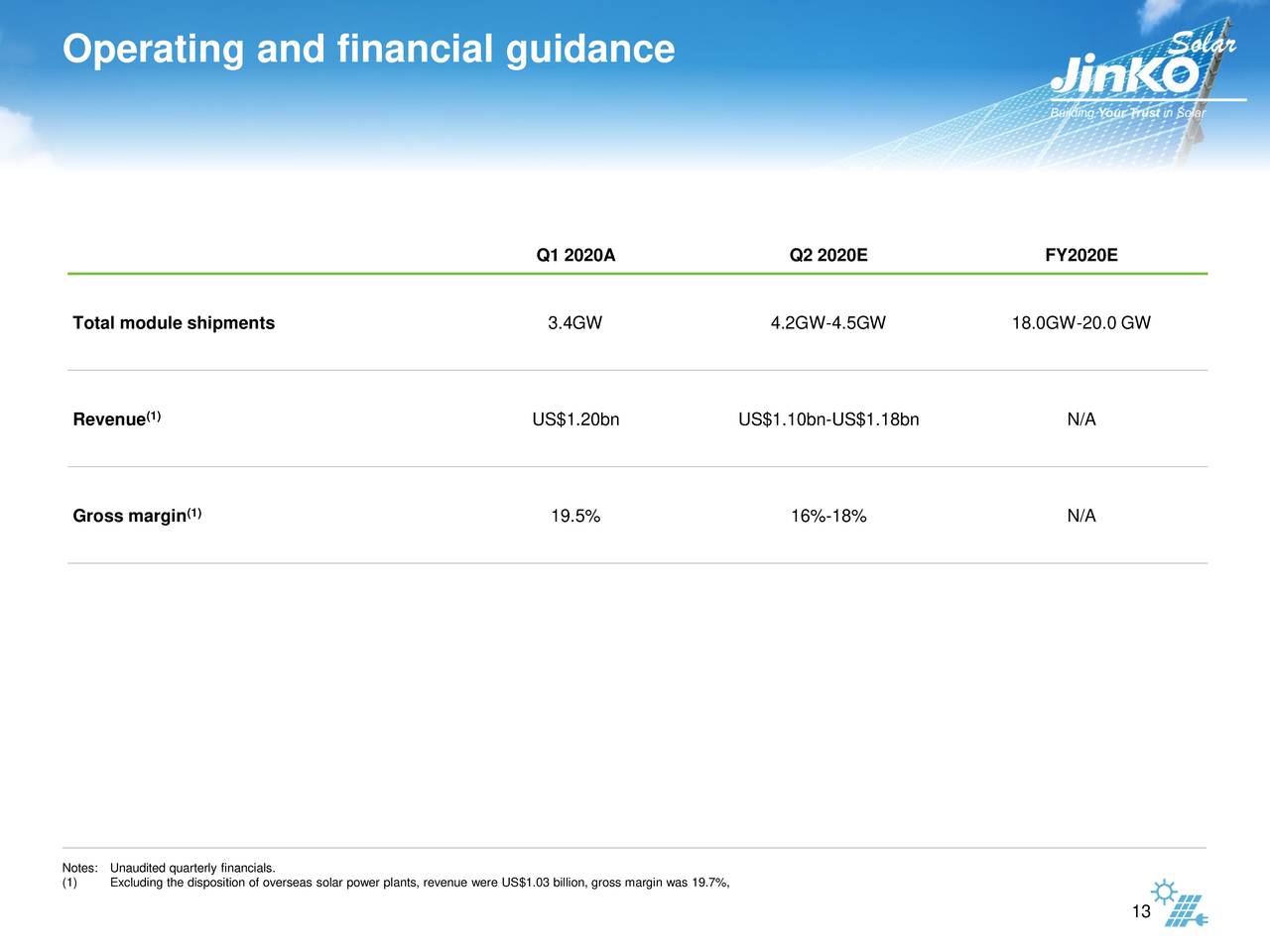 It isn’t surprising as management told investors that they expect the COVID pandemic to lead to 25% less installations this year (compared to pre-COVID estimates). This effect is compounded by the ASP declines that started by the end of March and early April.

However, it isn’t surprising either that investors balked, as the company had predicted a solid year as little ago as March.

One could argue that the guidance is actually surprisingly high in the light of the COVID impact and the fact that the Chinese market is in a lull, but management didn’t even take down its 2020 shipping guidance (18-20GW). From the Q1CC (our emphasis):

“From my observation, so Q2 number for the shipment mix, China will occupy not a significant number. What we’re – the number range we’re looking at is around, let’s say, 10% to 15%. So, however, it will rapidly going up, especially when the China market starting to boom by the second half… New bidding rounds for utility plants in 2020 are expected to start construction in the third quarter, reaching peak installation in Q4.”

We remember quarters when the Chinese market was easily 50% of their shipments, 10%-15% is unusually low.

Here is how JinkoSolar’s gross margin developed in the last 9 quarters. From the earnings deck: 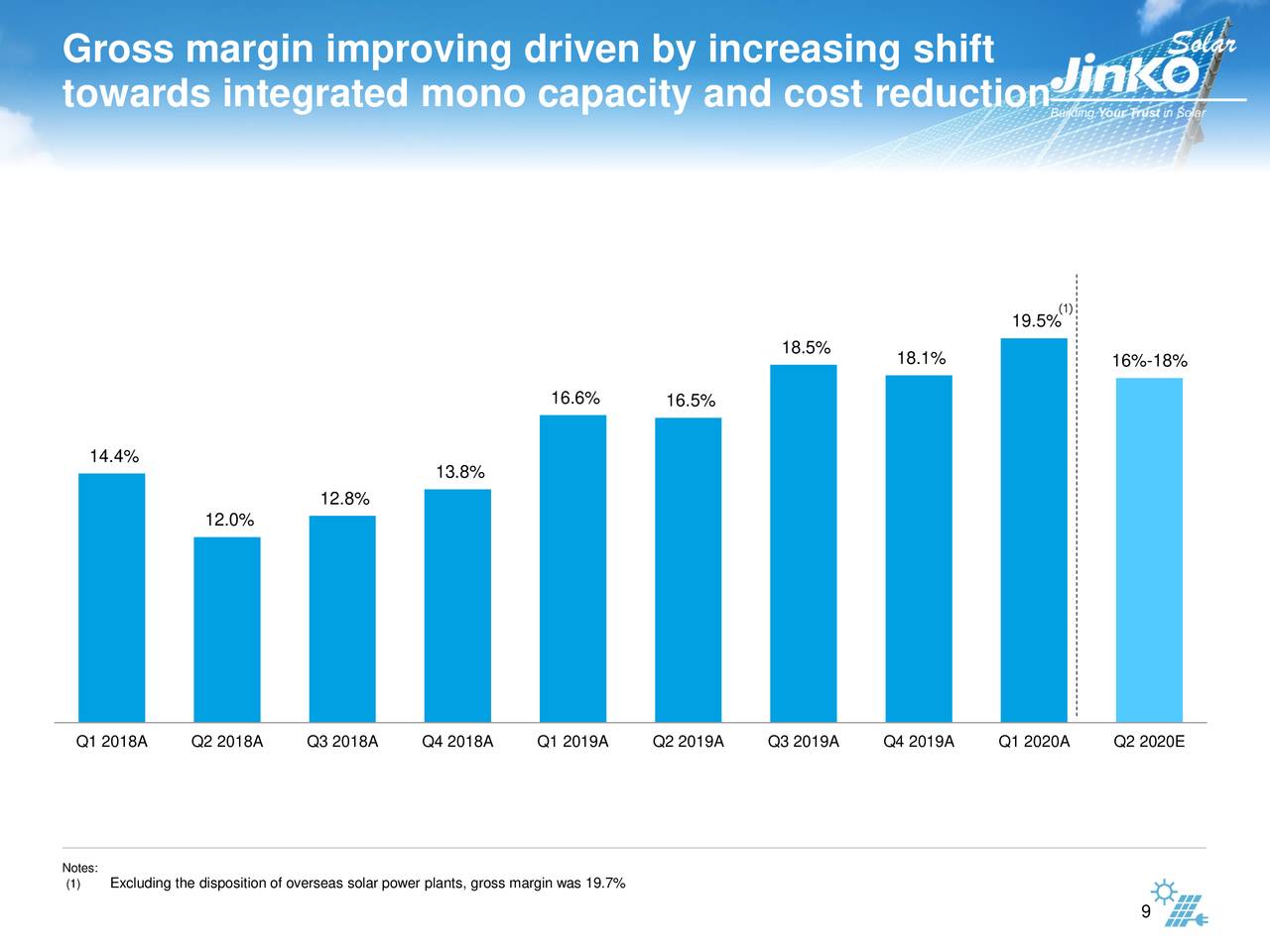 The slow shift towards premium products and cost cutting is behind the steady increase, but some competitors are actually doing even better:

Operating margin is also below its Chinese rival but ahead of the US solar companies:

Lest we forget, the company does still have some solar projects on the books, from the 20-F:

As a matter of fact, they did sell two solar plants, Q1CC:

We draw little comfort that despite this positive $421M debt reduction (or $123M in deleveraging of the balance sheet, according to the earnings deck) from these sales, the net debt situation actually deteriorated, despite this being a pretty good quarter:

The company had $114.66M in project assets on its balance sheet, so we assume these sales have eliminated all but one of their projects from their balance sheet (the one in Argentina remaining) by now.

The company nevertheless already bought back 200K of its ADRs within a week from announcing its March 12, 2020 $100M share buyback program. Obviously, management isn’t worrying about cash flow.

CapEx will be around $350M for 2020 (which is less than the $500M spent last year). They keep on adding production capacity at a pace exceeding operational cash flow. From the earnings deck: 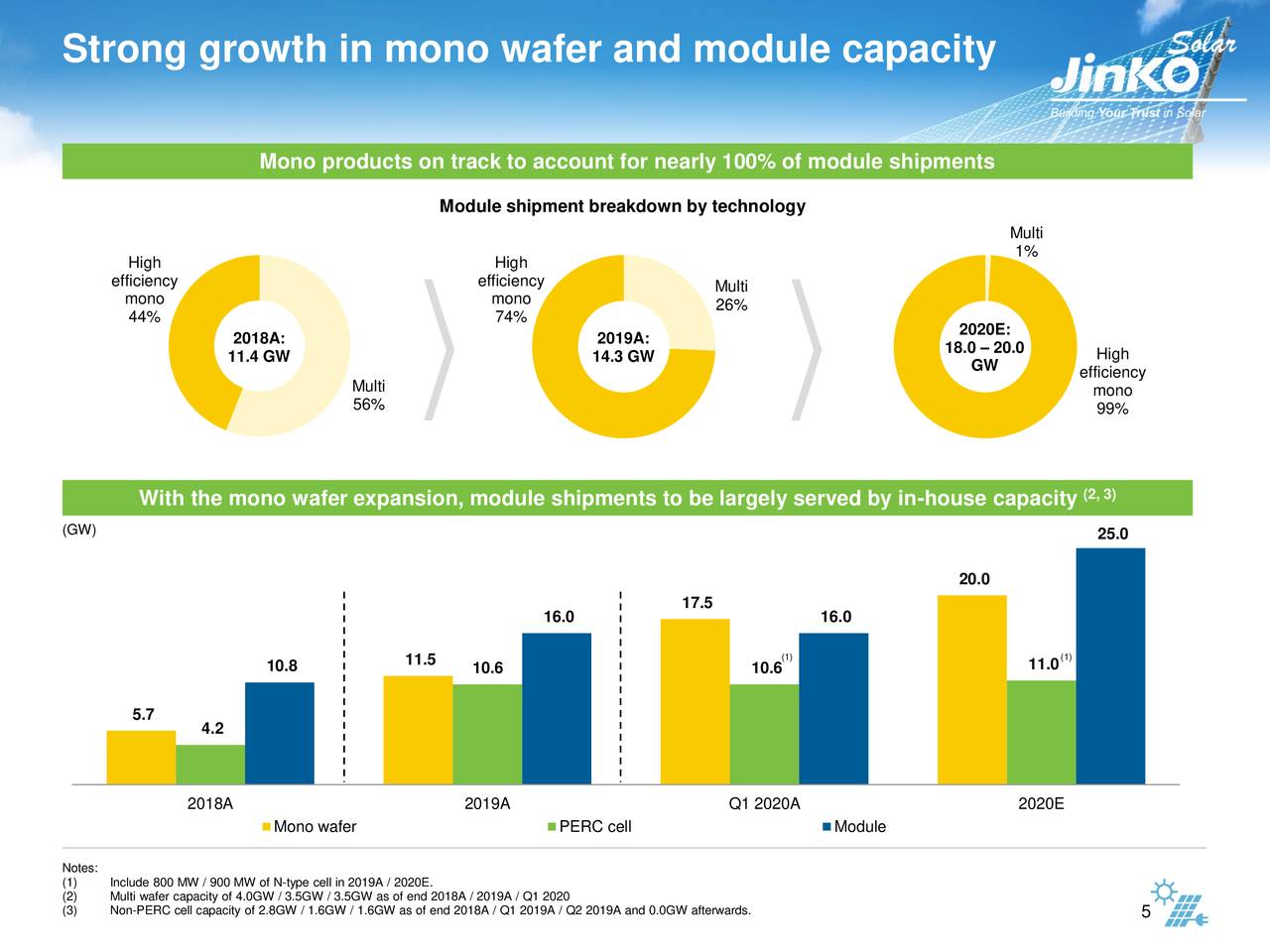 The earnings multiple is of course very low, but this isn’t really saying all that much given the cyclical nature of the company and industry. 11x EBITDA is low historically, which gives investors some reason to be optimistic about the possibility of some valuation metric expansion.

Apart from the cyclical nature of the solar business, we have some other concerns.

There is a long list of subsidiaries in the 20-F, and quite frankly, that isn’t something we’re too keen to see. The labyrinthine nature makes proper control more complex, and although we have no reason to doubt the company’s (consolidated) figures, it’s not a positive.

We have already mentioned above that the company is rarely cash flow positive and this has led to a history of issuing debt and shares.

The company does produce positive operational cash flow, but given their substantial and continuous CapEx (in additional production capacity), they have continuous financing needs.

As long as these investments in new production capacity generate a positive return, the situation is sustainable (the low interest environment also helps), even if most of the debt is actually short term.

This hasn’t stopped management from issuing a substantial buyback program, so obviously they don’t think they have a cash flow, nor a balance sheet problem, and indeed, if they significantly reduce CapEx, they could become cash flow positive in all but the biggest of downturns.

But given the secular tailwinds for the solar industry, we don’t blame them for being aggressive on CapEx, even if this structurally needs additional cash beyond what the company generates.

Unless the company starts to actually earn cash, we don’t see the shares structurally higher, but that doesn’t mean that investors can’t make money with the shares.

Industry rationalization, a comeback in the Chinese market (invariably the largest solar market in the world) towards the end of the year and the continued expansion of the parts of the world where solar outcompetes other forms of electricity generation are all good reasons to buy.

That is, we think it’s likely the shares will recover towards the mid-$20s towards the end of the year, but unless the cash flow situation shows signs of turning, it’s difficult to see much beyond that.

Disclosure: I/we have no positions in any stocks mentioned, but may initiate a long position in JKS over the next 72 hours. I wrote this article myself, and it expresses my own opinions. I am not receiving compensation for it (other than from Seeking Alpha). I have no business relationship with any company whose stock is mentioned in this article.