In the drawn out period between election day and November 7, when the race was called for her candidate, Ms O’Malley Dillon emerged from behind the scenes to deliver a series of “election protection” briefings in which she returned time and again to her north star: the data.

Armed with a PowerPoint slideshow laden with statistics and graphs, Ms O’Malley Dillon methodically explained that Mr Biden was on track to win enough battleground states to capture the White House. But she declined to engage with the bare-knuckle tactics of Donald Trump’s campaign, which alleged, without evidence, that Democrats had perpetrated mass voter fraud to steal the election.

“We’re just plugging along with our focus on making sure the votes are counted,” she said in one of the briefings.

It was typical of the low-key style preferred by Ms O’Malley Dillon, known to most as Jen, a longtime campaign operative who has made history as the first woman to run a winning Democratic presidential campaign.

“Jen is guided by the data and is one of the few people who can see [the overall] picture as well as a county by county picture in how to target and mobilise votes,” said Stephanie Cutter, who worked with Ms O’Malley Dillon on Barack Obama’s 2012 campaign.

“She had a strategy and she stuck with it,” Ms Cutter added. 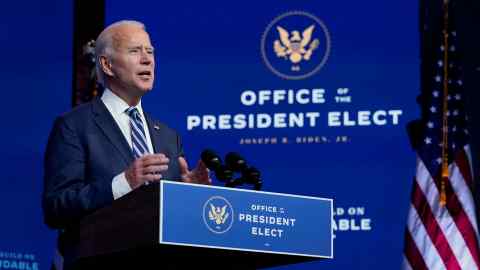 This week, the Biden campaign announced that Ms O’Malley Dillon, 44, will enter the White House in January alongside the president-elect, where she will serve as his deputy chief of staff.

READ ALSO  The perils and pitfalls of building multiracial democracies

Since Mr Biden’s victory, she has been credited with keeping the campaign’s attention directed at the “blue wall” states of Pennsylvania, Michigan, and Wisconsin, which flipped back to the Democrat after propelling Mr Trump to victory in 2016.

The focus on the “blue wall” meant the campaign did not pour additional resources into long-shot states, most notably Texas, even as prominent Democrats insisted the Biden team was letting a huge prize slip away. Polls had suggested Mr Biden was in touching distance of clinching the reliably Republican state, but Mr Trump ended up winning comfortably.

When you’re running a campaign, “everyone is a critic,” said Mary Anne Marsh, a Boston-based Democratic strategist. But while others in Ms O’Malley Dillon’s place might have “capitulated” to the complaints, she stood firm, Ms Marsh added. “She kept the blinders on and worked her plan . . . she executed relentlessly and it worked.”

A Massachusetts native, Ms O’Malley Dillon grew up in a staunchly Democratic household — her cousin is a Boston city counsellor — and developed the political bug early, working as a field organiser for Al Gore’s 2000 campaign while studying for an undergraduate degree at Tufts.

She met her husband while working on John Edwards’ unsuccessful 2004 campaign, before running battleground operations for Barack Obama during the 2008 race. She then took a role at the Democratic National Committee and became Mr Obama’s deputy campaign manager when he ran for re-election in 2012.

In the early days of the 2020 race, she initially served as campaign manager for Beto O’Rourke, the former Democratic congressman from Texas, before switching to Mr Biden’s team soon after he won Super Tuesday in March. She joined the team, which was in urgent need of an experienced manager, just two days before it shut down its offices due to the pandemic.

The low-key approach of Ms O’Malley Dillon stands in contrast to some other recent campaign managers. Kellyanne Conway, for instance, was a frequent fixture on cable networks when she ran Mr Trump’s 2016 presidential bid, serving as much as his public messenger as a hands-on executive. 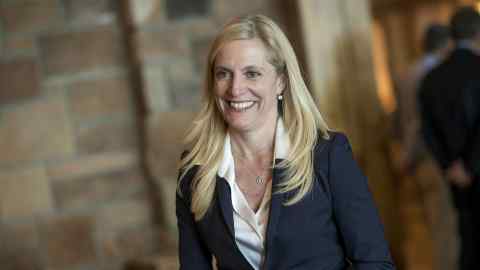 “In these campaigns when you’re in charge, the media wants to make you into a media figure,” said Steve Elmendorf, a Democratic lobbyist and fundraiser who was deputy campaign manger for John Kerry’s 2004 presidential bid.

“She seemed to be very disciplined about how to use her time to run [the campaign] and not have the ego of: oh well I should [be in front of the press],” he added.

Colleagues on the Biden campaign describe Ms O’Malley Dillon as a steady and calm presence, attributes that were particularly useful when fighting an unpredictable candidate like Mr Trump.

“It’s not like we were running against George W Bush or Mitt Romney. You’ve got to have somebody who not only projects calmness and steadiness but somebody who truly is a data scientist,” said one such colleague. They added Ms O’Malley Dillon is “a team player” but also “doesn’t put up with a lot of bullshit”.

Mr Biden spent much of the general election at his home in Wilmington, Delaware — sparking accusations from Republicans that he was hiding in his basement. Meanwhile, Ms O’Malley Dillon ran the show from her attic in the Washington DC suburbs, where she lives with her husband and their three children.

Although Ms O’Malley Dillon ran a winning campaign, it was not without its critics. Some Democrats have said the lack of a physical ground game — a conscious decision taken due to the pandemic — ended up hurting Mr Biden; Republicans attribute the fact that Mr Trump outperformed his polls to their superior door-knocking operation.

But Ms O’Malley Dillon never believed those polls. As pundits and traders priced in a blowout Biden victory, hers was one of the few voices of caution.

“What I don’t see when I look at [the electoral] map are the double-digit leads you might be hearing about online,” she wrote in an email to supporters three days later. “Here’s the honest truth: those are inflated national public polling numbers.”

Once again, it turned out that Ms O’Malley Dillon’s north star — her data — was right.