Activist investor Nelson Peltz and his investment firm Trian Fund Management have acquired a 9.9% stake in Janus Henderson, but investors should not pin all their hopes on a merger between Janus Henderson and Invesco Ltd (IVZ). Also, a further improvement in capital returned to shareholders is also challenging.

Janus Henderson’s share price has increased by +35% from $21.72 as of September 30, 2020 to $29.26 as of November 26, 2020, since the activist stake was disclosed. Janus Henderson’s current market capitalization-to-assets under management ratio is 1.46% based on its share price of $29.26 as of November 26, 2020, which is much higher than most of its asset manager peers. I believe that the potential positives associated with the involvement of an activist investors have been already priced in, suggesting room for disappointment.

I will upgrade my rating on Janus Henderson, only if there are concrete plans disclosed by the activist investor that could create value for the company.

Established in 2017 as a result of the merger between Janus Capital Group and Henderson Global Investors, Janus Henderson Group is a global asset manager with more than 2,000 staff working at its 27 offices around the world, and it has assets under management of approximately $358.3 billion as of September 30, 2020. The company’s headquarters is in the UK, and its shares are listed on both the New York Stock Exchange and the Australian Stock Exchange. 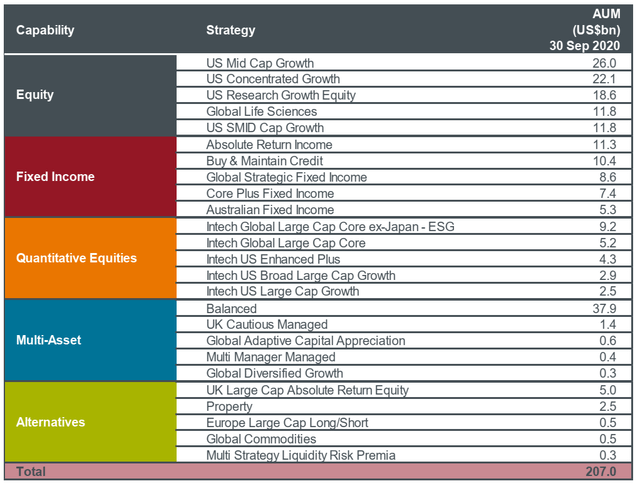 On October 1, 2020, the Wall Street Journal reported that activist investor Nelson Peltz has acquired a 9.9% equity interest in Janus Henderson and a similar stake in asset management firm Invesco Ltd as well, via his investment firm Trian Fund Management. In the same article, it was noted that Peltz “plans to agitate for deal making aimed at building a rival to the biggest asset managers in the world.” The Financial Times refers to Trian as an activist investor “which takes stakes in companies to lobby for corporate change”, and Trian has been involved in activist campaigns with companies in the financial sector such as Legg Mason and Bank Of New York (BK) in the past.

In the 13-D filed with respect to the acquisition of a stake in Janus Henderson, it was highlighted that Trian “had a conversation with the Issuer’s Non-Executive Chairman, Richard Gillingwater, and intend to engage in discussions with the Board and/or management of the Issuer regarding various strategic and operational initiatives that the Reporting Persons believe can generate value.” More importantly, it was also mentioned in the 13-D that Trian “may encourage the Issuer to explore, certain strategic combinations (such as mergers, acquisitions, consolidations or other extraordinary corporate transactions) with one or more companies in the asset management industry.” This seems to have suggested that a potential merger between Janus Henderson and Invesco was on the cards.

However, it is noteworthy that Janus Henderson shared the company’s thoughts on the benefits of size and potential mergers & acquisitions at its 3Q 2020 earnings call on October 29, 2020. Janus Henderson acknowledged that size “helps your ability to capture economies of scale” and “build a broader brand with key clients”. But the company also emphasized at the recent results briefing that its current key priorities are “to deliver excellence for the existing clients that we have” and “drive growth organically.”

Also, Janus Henderson is reported to have engaged Centerview Partners to “mount a defense against activist investor Trian Partners”, based on a report by DealReporter quoted by Seeking Alpha. Separately, in an interview with Barron’s in early November, it was highlighted that Marty Flanagan, the CEO of Invesco, “threw cold water on the notion that his firm should acquire or merge with Janus Henderson.” In contrast with earlier expectations, it now looks as though a merger or deal between the two asset managers are not as likely.

I think that any merger or deal between Janus Henderson and Invesco might be challenging for the following reasons.

Another reason is that economies of scale and cost savings resulting from a merger or deal might potentially be offset by outflows. Janus Henderson cautioned at the company’s 3Q 2020 results briefing on October 29, 2020 that “getting through consolidations or size accumulating inorganic transactions involves a huge amount of disruptions, which frankly, clients penalize very heavily.”

A Further Improvement In Capital Returned To Shareholders Is Also Challenging

In the 13-D filed by Trian with regards to its equity interest in Janus Henderson, it was noted that Trian might provide “recommendations relating to the Issuer’s operations, organizational structure, technology, product offerings, talent development and retention strategies, capital allocation and dividend policies and corporate governance.” While enhancing capital return is a low-hanging fruit, there might not be much room for improvement here.

Janus Henderson had maintained a consistent quarterly dividend per share of $0.36 for the past eight quarters, as per the chart below. I estimate that the company’s dividend payout ratio was a relatively high 63% in FY 2019, and if buybacks were included, Janus Henderson has returned almost all of its operating cash flow to shareholders in the form of either dividends or share repurchases.

In the first nine months of FY 2020, Janus Henderson had spent $103 million buying back approximately 3% of its shares outstanding. There is still about $97 million remaining from the $200 million share repurchase authorization which expires in April 2021. At the company’s recent 3Q 2020 earnings call, Janus Henderson highlighted that “we will likely continue with the same structured buyback program that we’ve had before looking at market volumes and the like.” 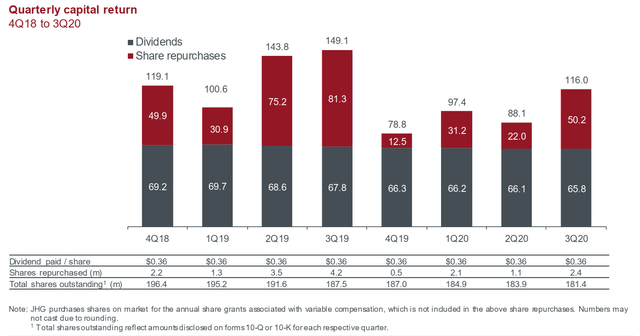 In other words, there is little room for an activist to further improve Janus Henderson’s capital returned to shareholders.

Janus Henderson’s current market capitalization-to-assets under management ratio is 1.46% based on its share price of $29.26 as of November 25, 2020. In comparison, the market capitalization-to-assets under management ratio for its peers BlackRock (BLK), Gamco Investors (GBL), Invesco and Affiliated Managers Group (AMG) are 1.4%, 1.2%, 0.6%, and 0.6%, respectively.

The key risk factors for Janus Henderson are the activist stake failing to lead to actions that create value for the company, and lower-than-expected capital returned to shareholders in the future.