Jane Fraser’s appointment as the first female chief executive of a big Wall Street bank was a cause for celebration in an industry that has struggled with gender equity. Even competitors expressed their approval.

But Citigroup stock edged lower on Thursday, and that underscored the challenges facing the 53-year-old Ms Fraser when she is scheduled to take over the bank in 2021. After years of weak performance, Citigroup investors seem less concerned with who is in charge than what remains to be done.

Her predecessor, Mike Corbat, 60, who announced that he would retire ahead of schedule in February, made considerable changes at Citigroup. But the bank’s shares have underperformed its peers.

“At the end of the day, you look at Citi and it is a group of companies bought through acquisition that don’t fit that well together, and it is not clear how they can grow efficiently together,” said Brian Kleinhanzl, bank analyst at KBW.

Citigroup was formed in 1998 when Sandy Weill merged Travelers, where he was chief executive, with Citicorp. Travelers was itself a collection of merged businesses, including its eponymous insurance arm, the Smith Barney brokerage and the Salomon Brothers investment bank, and Citigroup went on buy more companies, particularly in consumer finance.

The result was, in the words of a large investor in the bank, “an unruly beast” consisting of one set of businesses bought for their low funding costs and another set bought for their high returns — particularly in real estate finance. The company was brought low by the financial crisis, and one of Mr Weill’s successors, Vikram Pandit, had only begun to sift through the wreckage when Mr Corbat took charge in 2012.

Mr Corbat sold dozens of businesses and invested steadily in the bank’s strongest units — its corporate bank, capital markets operations, and credit card franchise. Subscale retail banking operations from Latin America to Europe to Asia were jettisoned and the bank’s US branch footprint was reduced to a handful of big cities. He completed the sale of Smith Barney to Morgan Stanley, which was begun under Mr Pandit and which brought in $7.4bn in much needed capital.

“Corbat did the job that was needed at the time: he came in and righted the ship,” said Mr Kleinhanzl. “He simplified the company, got into the good graces of regulators, and rebuilt the balance sheet.”

But there were two problems that Mr Corbat could not solve, which will be the defining challenges for Ms Fraser.

First, Citi’s returns continue to badly lag those of its two closest rivals, JPMorgan Chase and Bank of America. These banks have balance sheets of roughly Citi’s size (about $2tn) and also combine capital markets, retail banking and corporate banking. But while Citi has fought to reach a 12 per cent return on tangible equity, Bank of America is approaching 16 per cent and JPMorgan has hit 19 per cent.

Second, the stock market remains sceptical. Since Mr Corbat’s first day on the job, Citi’s shares have returned 55 per cent, compared with about 200 per cent for its two big rivals. While Citi has kept pace with wider banking indices, it has failed to do what JPMorgan and BofA have: transform its massive size into superior shareholder returns. The shares, further battered by the Covid-19 crisis, now trade at a big discount to the book value of the bank’s assets. JPMorgan and BofA still trade at a premium.

“She is going to have to deliver more shareholder value than has been delivered since the creation of Citigroup a couple of decades ago,” said Mike Mayo, bank analyst at Wells Fargo and a longtime critic of the bank — who now rates its shares a buy.

Analysts say one problem that has kept investors from buying into the transformation at Citi is its pattern of self-inflicted injury. This has usually taken the form of ambitious management targets that have been missed or revised; the latest embarrassing example was the bank mistakenly sending $900m to creditors of its client Revlon, who have refused to return the money, sparking a legal battle. 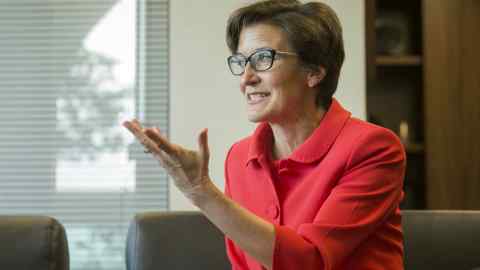 Another problem, which may prove harder to solve, is structural. Much of the outsize success of Citi’s rivals in the past decade was due to their big retail operations in the US, which have solid, steady returns — and which create strong cross-selling opportunities with their wealth management businesses.

Citi’s retail operation is large globally — with big businesses in both Mexico and Asia — but not domestically, except in credit cards. Unlike in institutional banking businesses where Citi excels, the benefits of scale in retail banking do not cross borders. And since the sale of Smith Barney, Citi has only slowly rebuilt a wealth management business that can benefit from client relationships in its various retail franchises.

While Mr Corbat declared in 2017 that “our restructuring is over”, it seems likely Ms Fraser will have to reopen the discussion. Yet there appear to be few easy options. Finding a buyer for the international retail assets would be a challenge. Adding scale in the domestic retail operation through a merger would be difficult, given the weakness of Citi’s shares as an acquisition currency — even if regulators would allow Citi to do a large acquisition, which seems unlikely.