Jacinda Ardern has appointed the most diverse cabinet in New Zealand’s history, with indigenous Maori ministers making up a quarter of its 20-strong members, women taking eight posts and the nomination of a gay deputy prime minister.

Although Labour won enough seats in the October 17 election to govern alone, the prime minister also handed the Green party two ministerial posts on Monday to secure its co-operation in government. The move will give Ms Ardern a commanding parliamentary majority.

The biggest surprise in the new line up is Nanaia Mahuta, the former minister for Maori development, who was appointed foreign affairs minister. It is the first time a woman has held the role in New Zealand.

These are individuals who have been promoted for what they bring to the cabinet. They also reflect the New Zealand that elected them

“It is both a cabinet with huge merit and talent, which also happens to be incredibly diverse,” said Ms Ardern.

“I think it’s an important point to make. These are individuals who have been promoted for what they bring to the cabinet. They also reflect the New Zealand that elected them. I think as a country we should be proud of this.”

The 40-year-old prime minister, dubbed the anti-Trump by Vogue magazine, has campaigned for greater political representation for women overt many years. Last month’s election returned 47 per cent female MPs, up from 38 per cent in 2017 — and the highest proportion in the nation’s history.

The Star Observer, an LGBTI newspaper, and Newshub have also labelled the newly elected New Zealand parliament as the “gayest” in the world, noting that about one in 10 of the 120 MPs are gay.

Analysts said Labour’s decision to include the Greens in government was a shrewd political move, which suggested Ms Ardern already had her eye on the next election rather than signalling a decisive shift towards progressive leftwing policies.

“Maintaining a good working relationship with the Greens could help Labour when it comes to forming a government following the next election,” said Grant Duncan, professor of politics at Massey University. 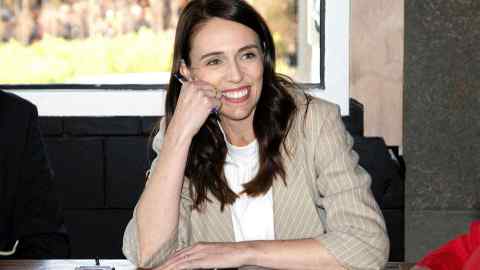 “The co-operation agreement makes no mention of big fiscal policy changes, such as a wealth tax, big increases in welfare payments or curbing emissions from agriculture. I think this is more about Labour domesticating the Greens.”

Nevertheless, Ms Ardern’s changes to the cabinet represent a bold political statement that places women, Maori and other minority groups in important decision-making roles. It should help silence internal critics on the political left, who have alleged her government will be incrementalist rather than transformative, said Bronwyn Hayward, politics professor at University of Canterbury.

“Beyond this the prime minister is signalling an affirmation of a new self-confident vision of New Zealand in the world, with strong Maori and Pacific leadership roles filled both internally and externally, including experienced Maori MP Nanaia Mahuta,” she said.

Ms Mahuta, who worked previously as an associate minister of trade, was first elected to parliament in 1996 and ran unsuccessfully for the Labour party leadership against Andrew Little in 2014. She wears a traditional Maori tattoo — known as a moko kauae — on her chin and has been a vocal advocate for her community during her political career.