Is This The Most Undervalued Energy Stock?

When a sector is under pressure, as energy is now, individual stocks often get dragged down with everything else to a point that just defies logic. That is the case now with the Colorado-based oil and gas E&P company PDC Energy (PDCE). The stock has lost over half its value since the 52-week high just under a year ago and is now trading at trailing and forward P/Es of 11.59 and 7.21 respectively. Those are low, even for an energy stock, but there are signs that won’t last, and a bounce back looks likely. 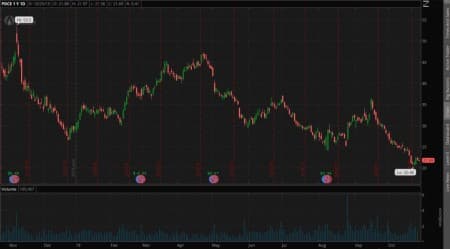 When an industry is facing tough times, companies face a choice. They can baton down the hatches, reduce costs, cut production, and try to ride out the tough times, or they can take advantage of the weakness and expand in anticipation of a recovery. PDCE took the second tack, and that is in part why their stock has been hit so hard.

A couple of months ago, they announced the acquisition of SRC Energy in an all-stock deal valued at around $1.7 billion. Issuing stock for any purpose dilutes the value of existing shares, but the value of the acquisition also has to be considered. When a company makes that move in a depressed market, there is a tendency to undervalue the purchase, and that is what happened here.

SRC is a good fit for PDC. The acquisition leaves them with a large, contiguous lease in the Denver-Julesburg (DJ) basin and should result in significant cost savings, yet the stock is lower now than when the deal was announced.

Perhaps that is why, of the 25 Wall Street analysts who cover the stock, 17 rate it either a “buy” or “strong buy”, with 8 “hold” recommendations, and no “sell” ratings. Those ratings are also strong for the most basic reason of all…PDC is value in a conventional sense.

The growth opportunities engendered by the merger, when combined with the low P/E, give a P/E to growth, or PEG ratio of 0.38. A PEG ratio of under 1.0 is generally taken to indicate that a stock is undervalued. If there is a knock on the stock, it comes from the fact that they have a heavy debt load and negative levered free cash flow, but a current ratio of 0.65 and a Moody’s announcement of a positive post-deal review of PDC’s credit rating both suggest that that is not too much of a problem.

Of course, to invest in PDCE, you have to believe that the fortunes of energy stocks overall will turn around before too long. There is an old investing saying that everything returns to the mean eventually, so the chances are it will…the question is when. With that in mind, this is a trade where an exit strategy is particularly important. If the sector weakness persists, the value is irrelevant, so a stop-loss somewhere just below $20 would be a good idea. If that is hit, you can always return to the stock when the sector does start to bounce.

If energy as a whole recovers, or even just holds steady from here, then the gamble that PDC took to expand during a period of weakness will pay off in a big way and the stock will probably outperform others in the sector because of it. That makes it a buy at current levels.