Is China’s “Clean Coal” A Lie?

Coal should be on its last legs. It’s dirty, it’s finite, and it’s not even that cheap anymore. These factors make it all the more surprising that Beijing is currently ramping up coal-fired power in China. “While the rest of the world has cut coal-based electricity over the past 18 months,” reports the BBC, “China has added enough to power 31 million homes.”

This is not to say that China’s dedication to coal power is anything new. From 2006 to 2015, Beijing operated on a “one coal plant a week” building programme. However, in 2015, the Chinese government attempted to slow down the growth of the coal sector as this breakneck “one coal plant a week” initiative proved itself to have dire consequences, producing huge quantities of choking smog that obscured Chinese cities, negatively impacting both the environment and the population’s health. The slowdown proved unsuccessful, however.

So unsuccessful, in fact, that it ultimately sped up the pace of new coal projects. This is because Beijing “continued to allow provincial governments the freedom to issue permits for new coal plants. That move misfired badly. Local authorities subsequently permitted up to five times more plants than in any comparable period” according to reporting by the BBC.

Now, China is continuing to add coal power at such a pace that they will soon have a coal production capacity “equivalent to the EU’s entire generating capacity.” A large portion (around 25 percent) of the coal plant plans currently on China’s docket are slated to be built in other countries. “Compared to the rest of the world, China is building about 50% more coal plants than are under construction in all other countries combined.” Related: Is The Aramco IPO The Ultimate Pump And Dump? 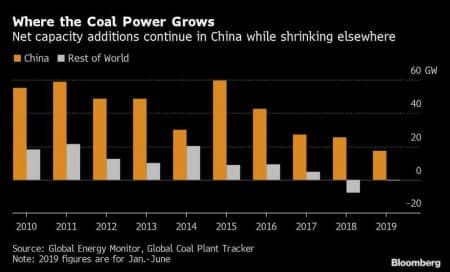 This development will majorly compromise the world’s ability to meet the carbon emissions targets set by the Paris climate agreement, of which China is a signatory. A new report from the Global Energy Monitor, a non-profit group that collects data about coal stations, as paraphrased by Bloomberg, says that China is “on track to cap installed coal power capacity at 1,100 gigawatts by 2020. However, its coal and power industry groups are proposing further expansion to capacity of 1,200 to 1,400 gigawatts by 2035, according to the report. Should that be adopted, China alone would have more than triple the limit on worldwide coal power determined by the Paris climate agreement to keep global warming well below 2 degrees Celsius (3.6 degrees Fahrenheit).”

This is a terrifying figure. While China continues to spend more than any other country on the development of clean energy, this is more than overshadowed by the amount of greenhouse gas emissions that will be created by its added coal power capacity. While the country’s pursuit of clean energy alternatives are good optics, they’re not good enough.

China would have you believe that this move toward coal is not all bad. Beijing has tried to deflect some of this bad PR by emphasizing a focus on “clean coal,” but as the South China Morning Post points out, there is a major problem with this narrative: “The problem with China’s ‘clean coal’ push is that there is no such thing as ‘clean coal.’” The article explains, “‘Clean coal’ describes a hope that new technology like emissions abatement or carbon capture and sequestration might one day solve the coal problem. To date, both technologies have proven uneconomic and unsuccessful in reducing emissions.”

In short, coal is coal, and burning a lot of coal is a major problem, not just for China, but for the world. When the world’s biggest economy has pulled out of the Paris agreement altogether, as United States President Donald Trump finally officially did on the first day he was legally able to earlier this month, and the world’s second largest economy leans into coal power, the potential ramifications for the global climate are disastrous.

By Haley Zaremba for Oilprice.com